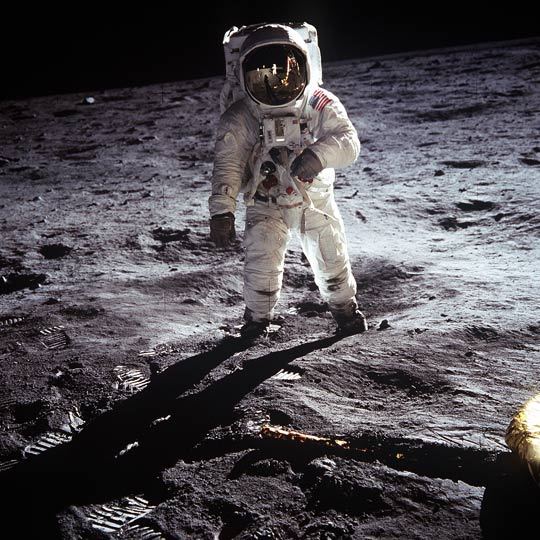 Aldrin on the moon during Apollo 11 mission. Courtesy NASA

Syfy is taking off on a journey to the moon this month, and it looks to encounter some ETs on the trip. The network will air the two-hour special Aliens On The Moon: The Truth Exposed on July 20 -- which just happens to be the 45th anniversary of the Apollo 11 moon landing.

Produced by Robert Kiviat (who was also behind 1995's controversial Alien Autopsy special), the documentary is supposed to include never-before-seen footage that will "show evidence of alien structures on the moon." Other promoted highlights include information about a female alien being found on the moon and revelations about aliens seen in the cockpit of a flying saucer.

Perhaps most interesting is that the special will feature interviews with Apollo 11 astronaut Buzz Aldrin and Apollo 14 astronaut Edgar Mitchell, "in which they share their belief in the existence of UFOs from first hand experiences."

Aldrin in particular has long been connected to UFOs. Most notably, in 2005 on the Science Channel, he said he saw something floating alongside the Apollo on the way to the moon. Aldrin said the network edited his comments out of context to make it seem like he was discussing an object extraterrestrial in nature, instead of an object the astronauts literally could not identify (which they then later decided was a floating panel from the upper stage rocket). But his connection doesn't end there, and Open Minds has a fairly extensive breakdown of the astronaut's potential encounter.

It remains to be seen whether Kiviat and Aliens On The Moon add to Aldrin's story, or to what we know about ETs hanging out on the lunar surface. But the special does seem like a fun way to celebrate the anniversary of the big event.

As for Syfy, I actually think it's nifty it is airing this kind of programming. Yes, it will have both believers and detractors, but I'm down with anything that gets us talking more about space. The network has really recommitted to the sci-fi genre, and this fits in nicely. If it somehow opens a door to an even more science-y program like Cosmos or Through The Wormhole on the cable net, it'd be as cool as a cold glass of Tang.