Had Sylvia Plath not killed herself at the age of 30, she might have turned 79 yesterday. Even in her short life span, she turned out an impressive body of poetry and prose, most famously the semi-autobiographical "The Bell Jar." Lesser known among her passions were those in the arts -- drawing and painting, which she studied while at Smith College. Though Plath never sought the professional success she found in her chosen field, according to her daughter Frieda Hughes, her "early letters and diary notes and poems were often heavily decorated, and she hoped that her drawings would illustrate the articles and stories that she wrote for publication."

This winter, 44 of Plath's previously unseen pen-and-ink drawings will be on display at London's Mayor Gallery, from Nov. 2 through Dec. 16, in an exhibit titled "Sylvia Plath: Her Drawings and Dadamaino: Volumes." We've compiled 16 selections, courtesy our friends at Flavorpill. Plath was catholic with her subject matter -- cats, boats, men, rooftops, all are replicated with a childlike affect that's absent from her writing. Many scenes come from Paris, near her adopted home of England, where she lived with her husband, the poet Ted Hughes. One, titled "The Bell Jar," is a study of the patent leather shoes she describes with care in the book. Here, in no particular order, are some of her drawings. 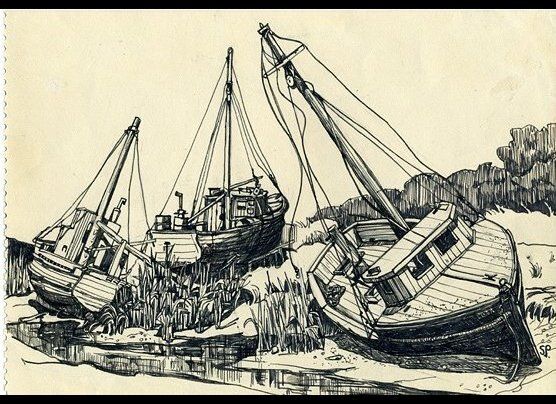