SAN FRANCISCO -- "When you invited me to join your event, I was hoping I would fit in," said Chief Golden Light Eagle, a member of the Ihunktowan Dakota Nation, looking out over the crowd of festivalgoers dressed in Burning Man-inspired attire. "But I seem to have forgotten my costume."

The chief led a traditional Sun Dance ceremony, one of several eclipse celebrations at the Symbiosis Gathering.

Participants honored the four directions with water from the nearby lake, sand from the desert at their feet and tobacco smoke from Chief Golden Light Eagle's pipe. The crowd grew quiet as the moon moved into position, finally offering viewers a perfect ring of fire. The reverence was palpable.

But an hour later, as the moon slipped beyond sun, the beat dropped on James Blake's headlining set on the other side of the event, launching a party that lasted until morning. As my Mormon neighbor once reminded me, we each pray in our own way.

Symbiosis--an increasingly popular festival celebrating art, music and sustainable living--celebrated its fifth event in May after a two-year hiatus. But unlike past gatherings, this year's annular solar eclipse was the star.

"I've been thinking about 2012 ever since I was a kid," said Symbiosis founder Bosque Hrbek in an interview with The Huffington Post. "So this event has been on my mind for years."

In recent years, Symbiosis has been compared to that other festival in the desert, with some participants dubbing it "the next Burning Man."

"The major difference between us and Burning Man is that Symbiosis is curated," said Hrbek. "We wanted to take our favorite slice of Burning Man and focus on that."

One festival participant referred to Symbiosis as "Burning Man in a bottle." Hrbek smiled at the sentiment. "I like that," he said.

And rock stars and DJs aside, the main headliner of the weekend was undoubtedly the land.

The festival was set on the Pyramid Lake Indian Reservation, home of the Paiute Tribe, and offered sweeping desert views, staggering rock formations and buttes and the shimmering blue Pyramid Lake--a mirage in a desert of white.

"My experience was much deeper than the usual adrenaline rush from a festival," said participant Katya Shkolnik. "It was more metaphysical."

"We were so fortunate to be able to celebrate the eclipse on this unbelievable land," Hrbek added. Besides the gorgeous setting and untouched geography, the site also directly aligned with the eclipse, offering one of the best views in the country.

Of course, the festival was not without its controversy.

As to be expected with an expensive music festival and an enormous crowd of almost entirely white participants (many of them drug and alcohol induced) set on Paiute land during a sacred event, pre-event anxiety and criticism poured down like rain.

In the months leading up to the event, a Facebook thread exploded with slams against Symbiosis. "They say that their organization was founded on strong principles of environmental consciousness and ecological sustainability!" wrote tribe member Wakan Waci Blindman alongside a photo of a bulldozer allegedly on the sacred land. "I call bullshit!"

Meetings were planned and the tribe held four public forums to debate the event. Critics cited environmental and spiritual concerns that were intensified by a 2011 incident of vandalism at one of the tribe's most precious sites: the Stone Mother rock formation.

But for a community that struggles with poverty and relies heavily on tourist dollars, the promise of 8,000 new visitors, millions of breathtaking Facebook photos and estimates of $250,000 in tribal revenue proved tempting.

"About a third of the tribe loved the idea, a third of them hated it and a third didn't care either way," said Pyramid Lake Paiute Tribe Tribal Planner Scott Carey to HuffPost.

In 2011, the Pyramid Lake Piaute Tribe founded Tribal Source LLC, an economic arm of the tribe established to help stimulate economic development in the community. The move won an excellence award from the American Planning Association, and Symbiosis was the first major project for the LLC.

"The whole reason we did this was to create revenue for the tribe," said Carey. "This was the first step in implementing the new plan--a plan that is essential to the tribe's development."

In a letter from the Pyramid Lake Paiute Tribe Cultural Resources Management Program, representative William Crutcher urged critics to welcome the opportunity for new visitors to experience the land.

"On a personal note," he wrote, "I would like to welcome the World Community, as our guests. Take in what is good for you from this gathering, enjoy this unique, historical event and safe travels."

In the end, two critical details deemed the site appropriate for the festival: the absence of any known burial grounds and the presence of a Grateful Dead concert on the same site in 1986, dubbing the land "previously disturbed."

Hrbek called in tribal cultural resource monitors and plastered the event website with environmental regulations, tribal rules and pleas for respectful attendance. Against the request of some tribal vendors, Symbiosis banned the sale of alcohol at the event.

But canceled it was not, and even while holding a walkie-talkie and a set list during the final day of the festival, Hbrek was smiling.

"There's just something about an eclipse," he said. "The sun, the moon and the earth aligning: it reminds us of our insignificance. It reminds us that we are still small."

CORRECTION: An earlier version of this article stated that Symbiosis was nearly cancelled due to tribal controversy surrounding the event. However, the source of the near-cancellation was actually a wind storm, not controversy. In an email to The Huffington Post, founder Bosque Hrbek explained:

"We were only talking of canceling the event due to the winds on Tuesday before the event, not due to the controversy. I always knew what we were doing and that our intention was pure. Everyone will have differnent opinions about everything [...] They will not always align, but surely this controversy only brought light to issues of communications within communites especially the natives of this country and how they interact with out white commuities working with them."

Check out photos of Symbiosis Gathering 2012 courtesy of Rosalyn Lee Photography and Celine Nadeau in the slideshow below. 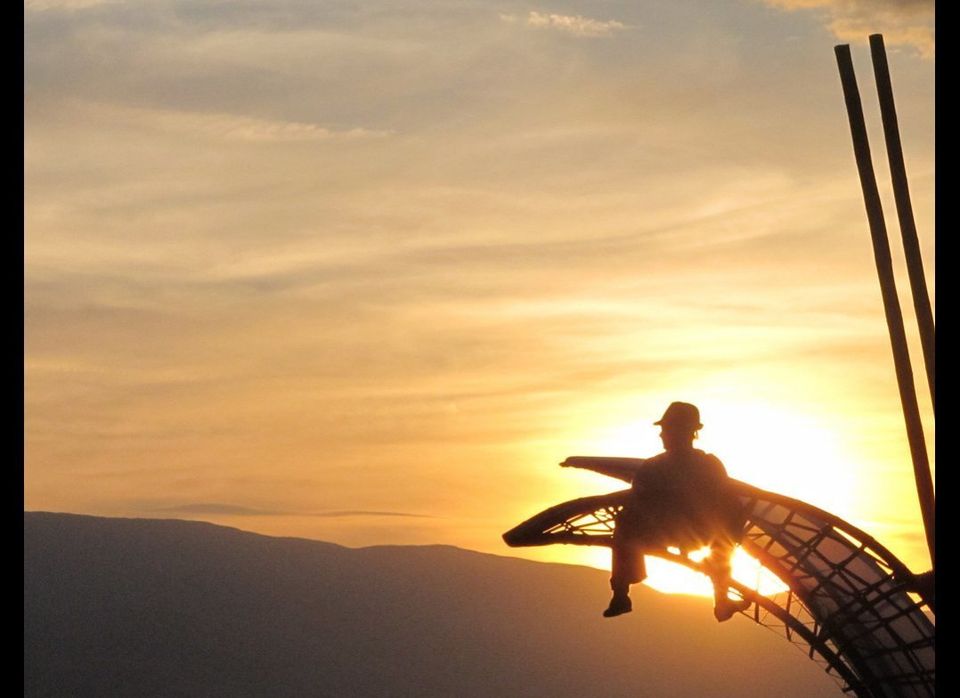