It's time, I think, to start enjoying con artists again. And I guess I should clarify right up front that I am not here to defend actual con men of any ilk. Real con men are a scourge of tawdry mass emails, pink fat faces in pin-striped suites and dull ponzee schemes. The real pain and loss wreaked by con men has cut too close to the bone over the past few years. No, the last thing we need right now are more real con men. Yet still, I'd argue that they do have their place, and it would be a shame if we lost our ability to enjoy them in that rightful place. It's time to reclaim the con artist from the con men, put them back where they belong: in the movies. That particular pleasure that comes with being well fooled is, after all, the purest essence of entertainment. Even in stories that have nothing to do with twisty plots or surprise revelations, even in the weepiest melodrama, the seed of our enjoyment is being tricked into having a genuine emotional reaction to people who we not only have known for less than two hours, but who we are fully aware do not exist. The lights come up, we gather up our tissues, and even then that lump in our throat lingers. And even though our most personal, private and primal buttons have been pushed to a specific end by a creation of pure artifice in order to get our money, like in any good con we don't feel that we've been taken at all. For the price of a ticket we can sit in the dark and safely experience that thrill of being lied to by an expert. It would take a more articulate man than myself to put into words that deep human need which this scratches, but speaking for myself, I know that metaphoric itch well. Which may be why the con man genre holds a special place for the cinephile. There's something thrilling about seeing this implicit dynamic made explicit on the screen. 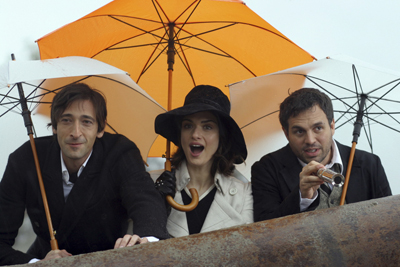 In classical con man films like House of Games or The Sting, when the denouement hits and the who-to-trust vertigo dissipates, and the whole facade is revealed, what usually happens only when the lights come up in the theater has just happened on the screen itself, and we're still in the movie. It's like waking up inside a dream. Then there are less structured films about fakery such as 8 1/2 or F for Fake, where the pleasure lies in feeling oneself fold deeper and deeper into the layers of deception and self deception until we're punch-drunk and not sure which direction is up. Then still there are relationship-based con films, where the small foolery we all engage in with wives and fathers, boyfriends and daughters, sisters and mothers, are all writ large and blown up to a level where they're sometimes painfully revelatory. The father/daughter relationship in Paper Moon may be played with an almost vaudevillian gusto, but for me it strikes home in a way that few other movies can. It's not so much about these two practicing trickery on the world, as it is about how their needs drive them to fool each other, and sometimes fool themselves about each other. If you can't relate to that, I don't know what to tell you. So let's not throw the baby out with the bath water. Even while we're running the con men tarred and feathered out of town (and, again, I'm on board with that. Hand me that chicken!) let's remember the distinct pleasures to be had from stories about con artistry. Rent a good one this weekend, or go see mine. (*cough* The Brothers Bloom, opening this weekend in New York and LA *cough*) And as you sit with your wallet safely in your pocket and your bank account secure, give a nod to that aristocrat of thievery, the noble con artist, up there on the silver screen. Where he belongs.