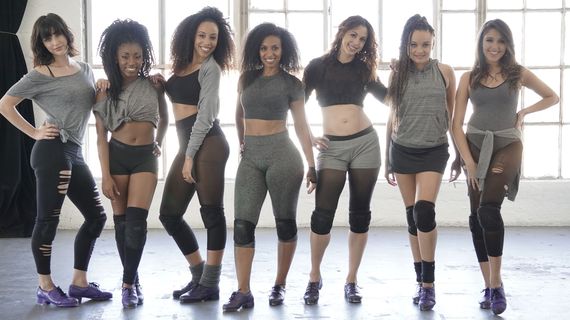 One of my favorite things about living in NYC is the amazing amount of talent. From subway and street performers to Broadway showstoppers, I can imbibed this cultural delicacy on the regular - ballet, jazz, musicals, theater, and more. I feast on this cultural smorgasbord as much as possible. I dress for the theater as if it's a clandestine meeting with a paramour and the arts never fail to disappoint. Our encounters are enthralling.

I love the theater, but unless the production is a "black" story, like Cotton Club on Parade, After Midnight, Shuffle Along, Motown or Cabin in the Sky, I rarely see people of color on stage. Lin-Manuel Miranda is changing the face of Broadway with his Hamilton, but that is not enough. After seeing Maurice Hines' Tappin' Thru Life, I wondered what happened to all the black tap dancing hoofers. We know of the legendary Nicholas and Hines brothers. Was tap dancing a lost art form within the black community?

Enter Chloe Arnold, founder of Syncopated Ladies. Syncopated Ladies are the beautiful and talented ladies that you know from their Beyoncé's Formation tribute. They've performed on Good Morning America and around the world. Now they are at it again. In the video below, their Prince tribute to When Doves Cry is sultry perfection worthy of the Purple One. It has social media wondering if they will be featured at the Prince tribute at the BET Awards.

I spoke with Chloe Arnold to talk about her amazing sisterhood of talented hoofers and what it means for women tap dancers.

When and why did you start tap?
My mom noticed that I had an affinity for rhythm. I started tap when I was 6 years old at a jazz/ballet/tap center at a local DC strip mall. At 9, I auditioned for an all tap company that had trained with the great tap masters. I was accepted on a three month probation. If I didn't pick up quickly, then I'd be dropped. Fortunately, I was able to stay. It also taught me that this is a job. Tap is like a language. First you pick up vocabulary, then through practice you learn to express yourself.

Did you always want a career in tap?
The best thing about the youth company that I was in was that they had master classes taught by the Nicholas Brothers, Gregory Hines, Ted Levy and Dianne Walker. I had a chance to see the greats in action. It was inspiring seeing them living lives as Tap Dance artists. It was then that I wanted to be a professional tap dancer. However, growing up we struggled, so I also wanted to go to Harvard Law School so that I would not have to struggle. I was accepted into Harvard and Columbia for undergrad. I choose Columbia because I wanted to be in NYC to pursue my dream of making a living as a tap dancer. I majored in film while at Columbia and studied dance in the city. My dream was to bring tap and dance to film, but I wasn't sure how and what that meant.

Why do you think there is a lack of representation of women tap dancers, especially dancers of color?
Women are marginalized in tap. So many women were killing it back in the day, but didn't get the opportunity. That is why mentors are important. At 16, Debbie Allen came to DC holding auditions for her play. I was selected as a dancer. Debbie Allen is the ultimate mentor, Renaissance woman, visionary. She always said, "Ladies, you have to do it all - write, dance, produce, direct." She was very progressive and a trailblazer. My younger sister, Maud, is also a tap dancer. Debbie's show had a revival years later, but I was in college. Maud auditioned and played the same role that I played. My sister also went to Columbia and majored in film and studied dance in the city. I focused more on directing film, whereas my sister is more a writer.

I saw a television interview of cast members from A Different World. They all mentioned that Debbie Allen gave them the opportunity to also produce and direct.
Debbie Allen catapulted my career forward after I graduated college. She asked, "What's next?" I told her my dream was to have a career as a tap dancer. She said that I should move to LA. I told her that I could not afford the move. She offered me a place to stay in her home. That was my "Fresh Prince of Bel-Air" opportunity. She provided access, but I had to do the work. She had high expectations for execution. She was my grad school education in show business. I began to pursue a solo career and earned money. Once Maud graduated from Columbia, I told her that we should start our own business. We were better as a team. We both have different strengths. We started Chloe & Maud Productions. We're best friends and sister-preneuers.

How did Syncopated Ladies come about?
In 2003, we were at a jam session at Debbie Allen's Dance Academy. This particular night there were only women, which is unusual because when it comes to freestyle/improvisational tap that's typically men. However, this time there were only passionate, talented women. I told them we should be a group. Four of the women in the Prince tribute video were at that jam session. We started off with just a couple of shows per year, and then in 2012, I told the ladies that I wanted to rock out in Tap shoes, and it was then that we made our first video, combining Tap with our favorite songs and artists - incorporating film and dance.

What does it take to be a Syncopated Lady?
Syncopated Ladies are built on a value system of sisterhood, solidarity, unity, and lifting each other up. Skills can be developed, but heart soul and genuineness must already be there. Debbie Allen used to say before each show, "Unify us, don't divide us." We say that before every Syncopated Ladies show. Also, teamwork makes the dream work. Every member of Syncopated Ladies is a multi-talented woman in her own right. Anissa Lee has been with us from the beginning. She was 11. Now she is a college graduate from Otis College of Art And Design with a degree in Fashion Design. She manages our wardrobe and costumes. Another dancer is an UCLA graduate, while another edits all of our music. Everyone is not only a talented Tap Dancer, but also brings other skills to the table. However, unity is most important.

What is the mission of Syncopated Ladies?
To unite, uplift, and inspire people to follow their dreams. We want to bring Tap Dance back to pop culture by sharing with the world that our art form is alive, well, and on the cutting edge. Finally, we want to give women a voice in our field. We are on a mission to take the Syncopated Ladies show worldwide, create jobs and help facilitate careers for aspiring young dancers, and to provide access and education to inner city youth. As African American women in this field, there's a history of being marginalized and really not adequately acknowledged. We're here to change that and show young girls around the world that if we get in formation (unite), our voices will be heard.

How do you plan to accomplish that?
We just performed in Dubai and women in burqas came up to us saying that they felt empowered. We have three outreach programs. The Chloe & Maud Foundation educates young people and provides scholarships. The Syncopated Ladies Boot Camp is held in several cities allowing ladies to train intensely with a focus on empowerment. Our DC Tap Fest brings the best tap dancers from around to teach kids to learn this American art form.

What is the future for Syncopated Ladies?
We want to create the next hit show and franchise Syncopated Ladies in a song and dance revue as an outlet and opportunity for women. It would tour the US and the world, but have residence in a city, like STOMP!

Last words for our readers?
First, we want to thank Beyoncé for sharing our video and introducing us to the masses. Syncopated Ladies has been around for 13 years and we are touched by those finally seeing our years of passion and honing our craft. It is awesome to be celebrated as a woman, especially as a black woman. We have so much love, respect and appreciation for Beyoncé. There's nothing more uplifting than being lifted up by another woman, especially a black woman. Second, my mom always believed in us. Even though she couldn't provide financially, she provided support and determination. She always knew we would achieve our dream of "imagined art come to life." Finally, we want to thank our brother, Tadeo. He's our trainer and owner of the fitness brand, Cuerpaso. Instead of trying to make us look like what the industry wants, he focuses on a healthy body for our individual body types. In the words of Prince, "A strong spirit transcends the rules." We thank Prince for the example he set to embrace freedom and to celebrate our unique artistic voices. 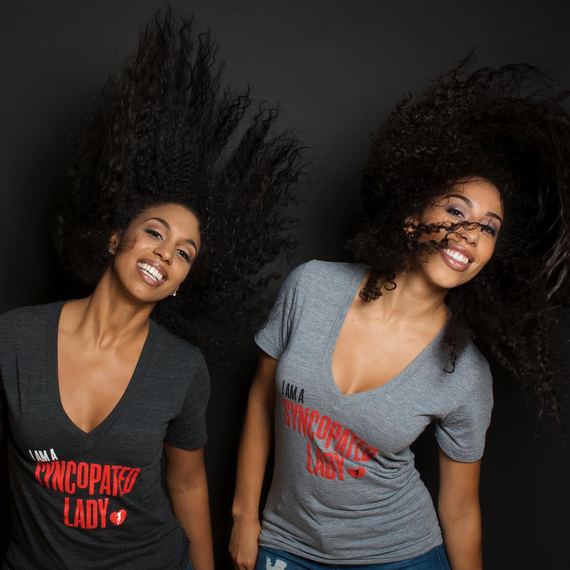