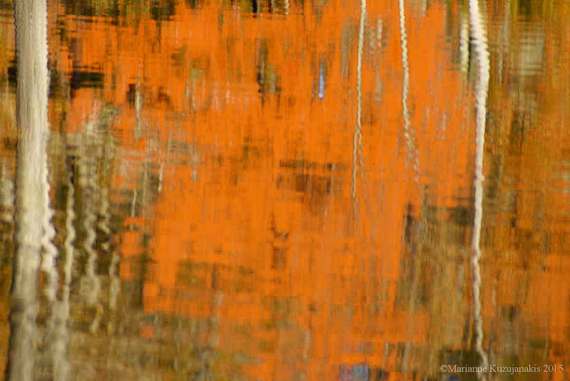 Say the number six and it sits at my temples, a serrated, moist tangerine sheen moving like fire. I prefer the number seven, pale turquoise and floating like a cottony cloud before my eyes. But my favorite has always been the number four, earthy, silent, smelling of mushrooms and cube-shaped.

I can admit this now without self-consciousness.

As a child I thought everyone perceived the world in this way. Until I realized they didn't. To avoid ridicule, I quickly learned to keep silent. The same silence recognized by some others of you reading this now. To me, numbers appear in color. Letters appear in color. Emotions are evoked by these splashes of hue. Have you ever burst out in tears while in a museum looking at Mark Rothko's color field paintings? The experience is visceral and embarrassing. It offers some comfort to know that others have had this same experience or a similar one when listening to a piece of music.

Only a short decade ago I found out this condition has a name: synesthesia.

The world is perceived differently by a person with synesthesia. Furthermore, each synesthete perceives colors and senses in unique ways different from other synesthetes. Synesthesia is also not typically taught in medical school. To those unfamiliar with synesthesia, it may be falsely considered a disorder. No citations can be found in any of the major pediatric medical journals. In adult medical journals it has sometimes been associated with drug use or a personality trait along a broad continuum that, in its far extreme, includes schizophrenia. Classic migraine sufferers with visual auras may have a higher incidence of synesthesia. Some report a higher incidence in those with autism. One famous autistic synesthete is Daniel Tammet, author of Born on a Blue Day.

Synesthesia in its true sense is not a mental health condition, artificially-induced condition, nor anything more than an inheritable trait, much like hair color and height.

Estimates place all combined forms of synesthesia at 3-4 percent of the population. Synesthesia may in fact define a new type of gifted, requiring a new approach to education, as reported HERE.

Synesthesia is reported more frequently among artists, musicians, poets and writers. Only recently is synesthesia becoming more recognized in the mainstream. In his book, researcher Dr. Cretien van Campen calls synesthesia "The Hidden Sense," and for some it remains so in part for fear of judgement.

Synesthesia essentially means "one sense" and was even mentioned by the ancient Greeks. A mixing of signals between what we in western cultures learn are the five basic senses of taste, touch, sight, hearing, smell. I say "Western cultures," as other cultures do not always split the senses so discretely. Dr. van Campen makes this point in his book, and others have also noted cultural differences.

Each synesthete experiences the world in a different way. important to mention that people with synesthesia are not all alike. Some synesthetes taste sounds. Some hear colors. Some sense music on their skin. Some can even "taste rainbows." Some, like me, limit their synesthesia to mostly numbers and letters. Dr. Sean Day, president of the American Synesthesia Association, states there may be as many as 63 varieties of synesthesia. Dr. Day was interviewed by BlogTalk Radio/The CoffeeKlatch about this subject.

But what is synesthesia and why do some people experience it? Dr. Richard E. Cytowic, a researcher in synesthesia, produced this TEDEd video introduction:

Neurologist Dr. V.S. Ramachandran also discusses synesthesia mid-way through his TEDTalk. It seems that some of our brain's sensory-related systems occur in very close conjunction with each other. Too many interconnections (or too few) can entirely change the way we perceive our environment. The close anatomic basis and the brain's neuroplasticity may make synesthesia more common than we believe it to be.

Especially in a child's developing brain, there is a constant building and pruning of connections. In my opinion, it isn't entirely out of the question to consider that crossing and re-crossing of senses may occur at this and other fragile points of life. Some children are known to experience a hypersensitivity to external inputs, be it auditory, visual, tactile, taste, or odors. A number of these children may be diagnosed with sensory-processing disorder. I sometimes wonder if a subset of these children are simply experiencing varying levels of synesthesia that become overwhelming.

Synesthetes are inspired by colors. The same can be said of most children. Some parents may be told their children are natural visual and musical artists. Watch them paint. A blue horse? What's abnormal about that? Children love to make music (and dance to it) in a wild spontaneous way. The music makes them feel emotion and sense color. Have a child draw a picture of music. More than likely they will splash the paper with a variety of colors dependent upon what emotions and colors speak to them through the music.

With time, many of these same children either lose their synesthetic perceptions or begin to conform to societal and cultural expectations. Only a small actual percentage of adults retain and express synesthesia traits.

My own son since a very young age has been very particular about color. When he was quite young, this has often been to the dismay of art teachers. He could easily spend most of an entire class just mixing the "right" blue or green or red. To ask a child with synesthesia to paint something blue is asking a lot. So much goes into choice and the "wrong" color speaks loudly like nails on a chalkboard.

Perhaps the ability for synesthesia exists asleep in each one of us, just out of reach and consciousness. But the lack of complete understanding is a jolting reminder that there is still so much more to learn about the mind and how much caution we must meanwhile take in interpreting human behaviors and abilities.

Whether synesthesia is a strength is certain. Award-winning musician Pharrell Williams has been very vocal about his synesthesia. A few other well-known synesthetes include Duke Ellington, David Hockney, Richard Feynman, Itzhak Perlman, Vladimir Nabokov, Norton Juster, Vincent van Gogh, and many many more.

It is a definite comfort to share a unique ability with such an illustrious group. But the surprise and subsequent fear people as a whole experience of being different often keeps them prisoners in their own minds. This is true of synesthetes as well as anyone with an ability that exists outside the narrow range that society labels with the term "neurotypical."

The message that cannot be said too often is this: The whole of society needs to more readily embrace atypical minds. The strength and the future of the human race is in our differences, not our similarities.

Some organizations for more information:

Some children's & young adult books with characters having synesthesia:

Picture Books:
The Noisy Paintbox by Barb Rosenstock & Mary GrandPré
The Girl Who Heard Colors by Marie Harris & Vanessa Brantley Newton
Middle-Grade Books:
A Mango-Shaped Space by Wendy Mass
One Plus One Equals Blue by MJ Auch
The Name of This Book Is Secret by Pseudonymous Bosch
Young Adult Book:
Ultraviolet by R.J. Anderson

"Let me, O let me bathe my soul in colours; let me swallow the sunset and drink the rainbow." Kahlil Gibran