Lately I've been feeling a little homesick and with all the insane news and horrific images that keep pouring out of the syrian war, with shelling and bombing that is ruining much of Syrias antiquities, architecture and heritage sites, I wanted to put together a series of images from Syrian cities that remind myself and everyone who has lived, visited or perhaps wanted to visit this beautiful country, of a time when we lived in peace, shared amazing memories and experiences of a culture rich in its history. Syria, a country which is known as the ancient pearl and the begining of civilization (9000BC), is home to the bronze age (3000-2000BC), where writing was invented and the rise of Ugarit brought the oldest written alphabet and the first musical notation.

Here is a compilation of some of my favorite things and places from Syria before the war :-

It is believed that the Hurrian Hymn is the oldest musical notation in the world, aging back to 3400 years. It was discovered on clay tablets in the ancient city of Ugarit, Syria. Many interpretations and performance attempts of the note have been done by composers and artists, this is one of my favorite, played by the syrian composer and pianist Malek Jandali. 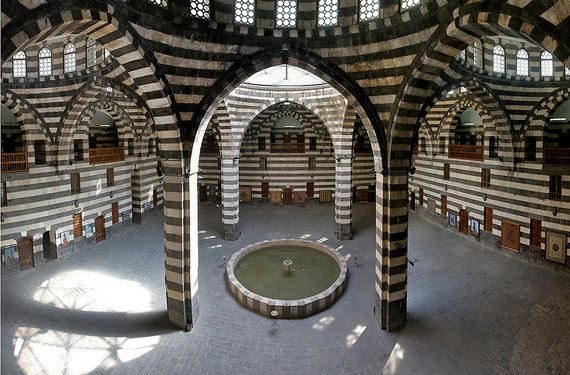 One of the largest Khans in the old city of Damascus, this khan was named after the great As'ad Pasha who was the ruling governor of Syria between 1751-1752. This work has been described as one of the greatest architecture pieces of the time, and has hosted caravans coming from Beirut, Aleppo, Baghdad and many other cities around the Ottoman Era. 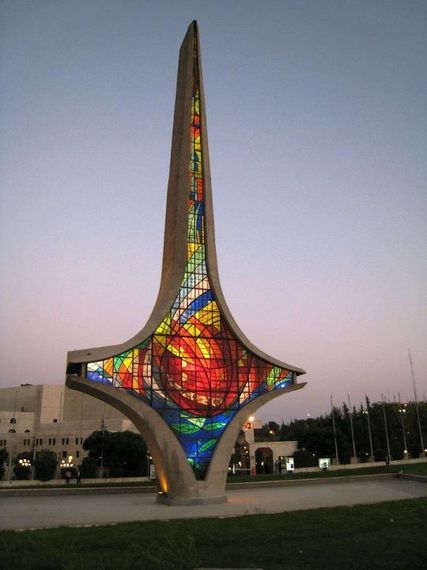 The city of Damascus, which is also the capitol of Syria had a great reputation in the sword industry. Its swords were rumored to have been able to cut through steel material. Historians date the Damascene sword back to the 8th century where it was crystallized among crusaders who defended the city from external attacks. The monument stands in the Umayyad square in the city of Damascus and is a symbol of the victories, strength and achievements of the syrian people. 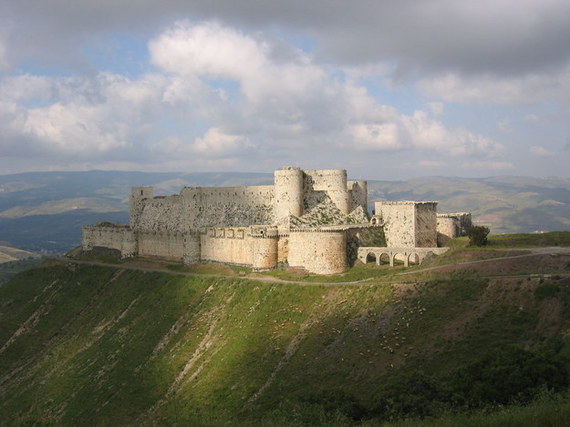 The Krak Des Chevaliers or in english the "crusader palace" is one of the most important preserved medieval castles in the world. It was coined as the Krak Des Chevaliers in the 19th century. Initially, it was named as the Castle Of Kurds, who were its first settlers in the 11th century, it was then given by the count of Tripoli to the Knights of Hospitaller. In 2006 it was identified by the UNESCO as a world heritage site, unfortunately it was partly damaged in the Syrian civil war due to shelling. 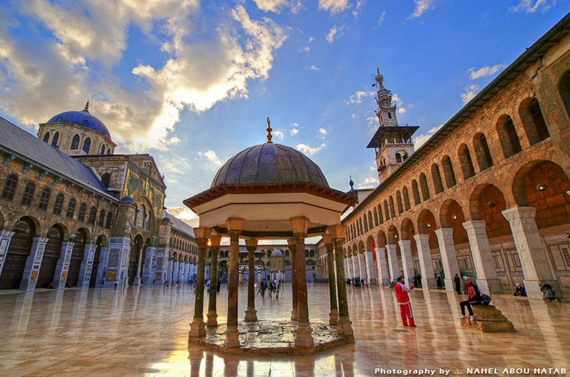 The Umayyad Mosque is one of the oldest and largest mosques in the world. Constructed on the site of the Byzantine cathedral in 706, It is Known as the great mosque of Damascus and has the mausoleum that contains the tomb of Salah El Din. It is said that the Umayyad Mosques prototype inspired the construction of Al Azhar Mosque in Cairo, the great Mosque of Cordoba in Spain and the Bursa Grand Mosque in Turkey.

Damascus By Night As Seen From Mount Qasioun 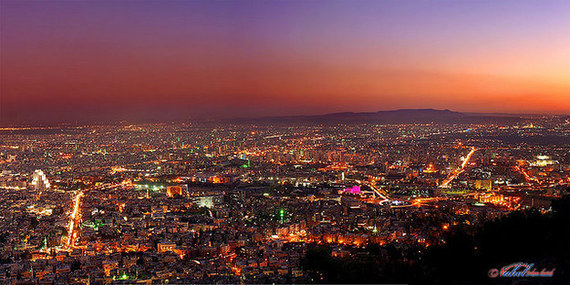 Damascus is one of the the oldest cities in the world, nicknamed as the city of Jasmine. It is a major culture and religious center of the levant. According to some old myths and interpretations by scholars, Mount Qasioun was the place were Cain killed his brother Abel with a rock. After Cain killed Abel, he carried his body and buried it in the mountain on the border between Syria and Lebanon, around 33 km from Damascus and close to Zabadaneh. 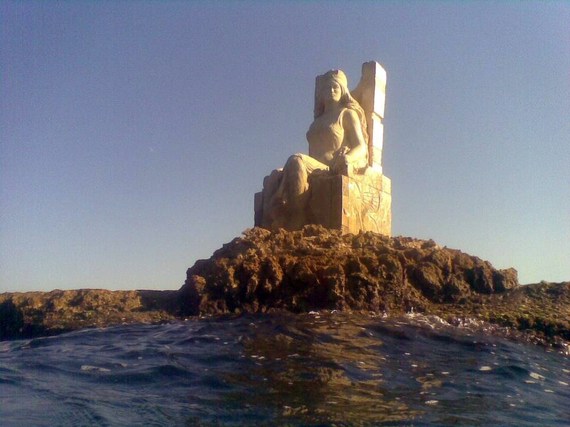 Zenobia was the queen of the Palmyrene Empire in Syria and served in the 3rd century. She is one of the most iconic queens of Syrian heritage, idolized for her bravery. Queen Zenobia led one of the largest revolts in history against the roman empire. Zenobia became queen of the Palmyrene Empire in 267, conquered Egypt until 271. It was said that she was later executed in the streets of Rome.

Kessab is one of the most beautiful towns in northwestern Syria. It shares borders with the Armenian kingdom of Cilicia and its population is mostly comprised of Armenian immigrants who contributed to the development of its land and agriculture. It is believed that during the seleucid period, the region of Kessab was the centre of the triad of the cities of Antioch, Seleucia and Laodicea. According to ancient greek mythology, the mount casius located within this triad was the sanctuary of Zeus.

The Ugaritic alphabet is the earliest known alphabet that was used in the semitic kingdoms in the 12th and 13th century BC. Its writing unified the scripts used in Phoenician, Hebrew and Aramaic, It is known to be the greatest discoveries of literature since the Egyption hieroglyphs and the Mesopotamian cuneiform. Widely used and extended in the 15th century, the script that is written from left to right gave the alphabetic order to the Latin, Hebrew and Greek alphabet and it is the oldest source providing written evidence of the Levantine's alphabetical history. In 2005 it was registered by the UNESCO as the "Phoenician alphabet" that falls into the memory of the world program. 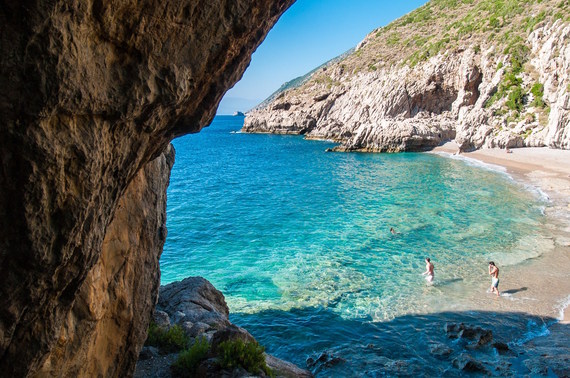 Al Samra beach is one of the most beautiful beaches in Syria and is situated at 800 meters above sea level. Located on the northwestern part of the country, it lies on the borders between Syria and Turkey. 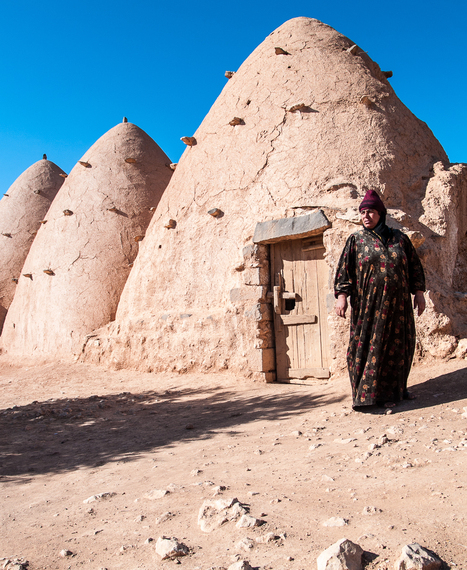 Made from dirt, mud, stones and straws, the beehive houses were a 3,700 BC creation in Syria, Still adopted and used for living and storage purposes by the syrian people till this present day, It is mostly found in the deserts and rural farming areas of Hama and Aleppo, the Beehive houses are designed for desert climates to keep the heat out. The oculus located at the top of the beehive provides light to the interior of the house and sucks the hot air out in an upward style. Designed with basic and natural material, this design has also ensured that the house is maintained in rainy seasons as its shape allows rain to drain off from the facade, causing little erosion to the beehive homes exterior. 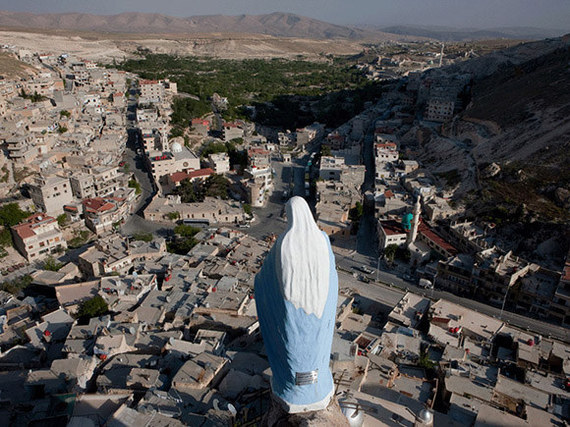 Ma'loula is a small town located 56 km to the northeast of Damascus and is built into the rugged mountains at an altitude of more than 1500 meters. It is one of the three remaining villages were its inhabitants speak the Aramaic language which is the last surviving dialect that was spoken by Jesus Christ. The word Ma'loula which is derived from the Aramaic language, meaning "Entrance" in english, has one of the oldest surviving monastries in Syria that was built on a pagan site in the 6th century of the Byzantine period. 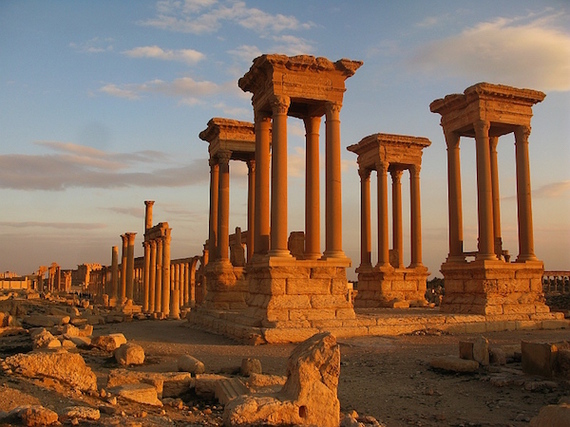 The ancient ruins of palmyra are located in the Syrian desert, lying north east of Damascus. It is one of the most important cultural centres of the ancient world. 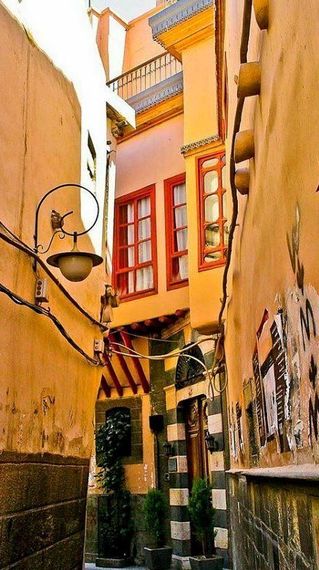 Bab Tuma, meaning "The gate of Thomas" is a borough in the old city of Damascus and one of the gates inside the historical walls of the city. Following the occupation of the cities of Alexandretta and Antioch by the Turkish troops in the 16th century, Bab Tuma became a major hub for the Greek Orthodox and Greek Catholic churches of the Levant region.

The Citadel Of Aleppo 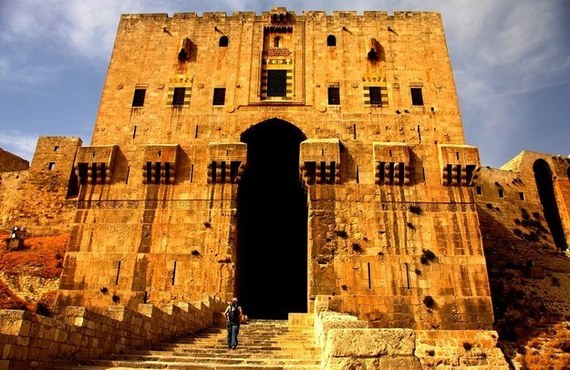 The citadel of Aleppo is considered to be one of the oldest and largest medievel palaces in the world. Located in the centre of the city of Aleppo, it dates back to the 3rd millenium BC and was occupied by the Byzantines, Greeks, Ayyubids and Mamluks. The Citadel of Aleppo is under the 1986 UNESCO world heritage sites. Unfortunately it was severely damaged amid the shelling and bombing in the Syrian Civil War. 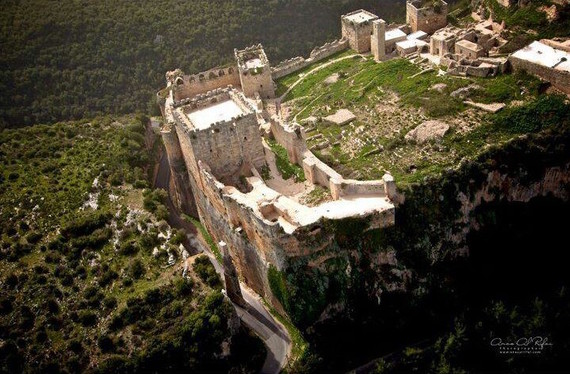 One of the most breathtaking castles of its time, the Castle Of Salah El Din, also known to be the Saladin Castle was fortified since the middle of the 10th century. Built between two deep ridges at 2,300 ft, it guarded the route between the cities of Latakia and Antioch and represents the fortification of construction and survival of historical statigraphy. The Citadel Of Salah El Din remains one of the most significant castle developments in the Levant region.