In its random cruelty, the conflict in Syria starts to resemble the war in Bosnia 20 years ago, when Serb, Muslim and Croat forces tore the Balkan country apart and the besieged people of Sarajevo buried thousands of dead in sports fields.

Bosnia's carnage was broadcast globally month after month by 24-hour satellite television news then in its early days. The slaughter in the Syrian city of Homs has been playing out to the world almost hourly on mobile phone and amateur video.

Intervention did come to Bosnia, but so hesitantly that the agony of its people went on for nearly 4 years, in which tens of thousands were killed and a million lost their homes.

Western powers who finally stopped the slaughter say they have no intention of going into Syria, a move that would have incalculable consequences in a volatile region.

Bosnia was a small republic of Yugoslavia, a European crisis on NATO's doorstep. Syria is a major Arab republic with powerful friends in Russia and Iran, situated on a strategic crossroads.

The most readily recognisable common denominator between them is the Soviet-era T-72 tank. It has smashed its way into cities to crush lightly-armed rebels and civilians alike in 11 months of suppression by Syrian President Bashar al-Assad.

There is an air of deja vu about these scenes and the "humanitarian" remedies now being demanded, aid missions which in Bosnia led inexorably to armed intervention.

"The Bosnian War and the conflict in Syria are different in nature," say Soner Cagaptay and Andrew Tabler of The Washington Institute. But "any international groups looking to provide humanitarian intervention to protect vulnerable civilians in enclaves 'liberated' by the opposition (in Syria) should draw on lessons from Bosnia in the 1990s".

Those lessons show it would require an international force protected by air power and with a mandate to shoot back. It would likely be NATO-led, headed by a Muslim general from NATO member Turkey, Syria's northern neighbour, and including Arab units.

Turkey months ago called for safe havens for Syrians, and is now collaborating with the Arab League and France. At least 5,500 Syrians have been killed in 11 months, the UN says.

A "Friends of Syria" meeting to be held with Arab states in Tunisia on Feb. 24 "will produce a very strong message of solidarity with the Syrian people and also a warning for the Syrian regime", says Turkish Foreign Minister Ahmet Davutoglu.

France wants the United Nations Security Council to approve its plan for humanitarian corridors into Syria from Turkey, Lebanon or Jordan, to the Mediterranean coast or an airport.

If this won U.N. backing, Turkey, already hosting refugees and army defectors from Syria, seems the most likely bridgehead.

But French President Nicolas Sarkozy on Friday ruled out direct intervention, saying that in Syria "the revolution will not be led from outside ... it must be led from the inside".

In Bosnia, the world watched atrocities happening as intervention came in slow motion, held up by Western reluctance to wade into what was seen as an ethnic civil war, plus Russia's adamant credo of non-interference and long-winded diplomacy blurred by a convenient pretence that it was a fair fight.

Similar factors are at play in Syria. The vetoes of Russia and China have so far blocked any action by the United Nations Security Council, insisting on non-interference in a guerrilla uprising against a legitimate state.

But last week the U.N. General Assembly condemned Assad's government for gross human rights violations and told him he must go. Its resolution backed an Arab League plan demanding the withdrawal of Syrian heavy weapons from towns and cities. It was non-binding. But so were the early resolutions on Bosnia.

The best weapon in Bosnia against the unmatchable firepower of a Bosnian Serb army bristling with tanks and artillery turned out to be the anger and disgust of world opinion.

So far, there have been no mass demonstrations in Western capitals demanding that NATO governments intervene in Syria. But, judging by the demands piling up from foreign leaders for Assad to step down immediately, pressure appears to be building.

In Sarajevo last week, Hollywood star and human rights campaigner Angelina Jolie screened her new film about the war, In the Land of Blood and Honey. She said she hopes it will serve as "a wake-up call" to the world to stop Syrian atrocities.

NATO Secretary General Anders Fogh Rasmussen says that, even with a U.N. mandate and Arab backing, he doubts the alliance would get involved. Yet as Bosnia showed, policies can change.

"We got no dog in this fight," U.S. Secretary of State James Baker famously said in 1991 after a failed mission to stop the bloody disintegration of Yugoslavia which ignited Bosnia's war.

But when it turned into Europe's worst conflict since World War Two, NATO did get into the fight, starting with a token 50 peacekeepers but ending with 100,000 in the country, after bombing Bosnian Serb heavy weapons to impose a peace settlement.

It took five years and over 100 United Nations Security Council resolutions to extinguish the war the United Nations had hoped would end in the summer of 1992. It ended in the winter of 1995, with more than 100,000 dead and entire cities destroyed.

But many more lives were spared because Bosnia's atrocities posed a challenge to the power of the United States and its European NATO allies that they could not afford to flunk.

Establishing safe havens and humanitarian corridors in Syria would need a U.N. mandate. Russia, opposed to "regime change", says it would have to see the language of such a resolution.

In June of 1992, U.N. Security Council Resolution 761 emphasised the urgency of getting aid into Sarajevo. A convoy of white armoured personnel carriers bearing U.N. symbols and UNPROFOR troops in helmets of U.N. blue duly made its way over the mountains from Croatia to take control of Sarajevo airport.

UNPROFOR became what historian William Shawcross calls "one of the unhappiest U.N. peacekeeping missions in recent times", a classic case of 'mission creep' that learned painfully by its many mistakes.

By putting 'boots on the ground' NATO was committed to protecting its troops, who in time had to be backed up by tanks and alliance warplanes. After many contemptuous Bosnian Serb challenges, it finally acquired the "robust" U.N. mandate that military analysts said it needed from the outset.

But the right to shoot back came only after the humiliation of soldiers who saw people in "safe havens" being shelled with impunity, while TV cameras recorded NATO's apparent impotence.

The Washington Institute's Cagaptay and Tabler say a mission to Syria could succeed, and avoid escalation, if it heeds the lessons of Bosnia and avoids the pitfalls.

Firstly it must avoid "designating safe havens without a credible military structure to protect them". Secondly it must not "send in peacekeepers without a strong mandate for them to shoot back". Thirdly, it must "use airpower to protect the enclaves and maintain humanitarian corridors."

They speculate that it would be commanded by a Turkish general, operating from NATO headquarters. (Reporting By Douglas Hamilton; Editing by Giles Elgood) 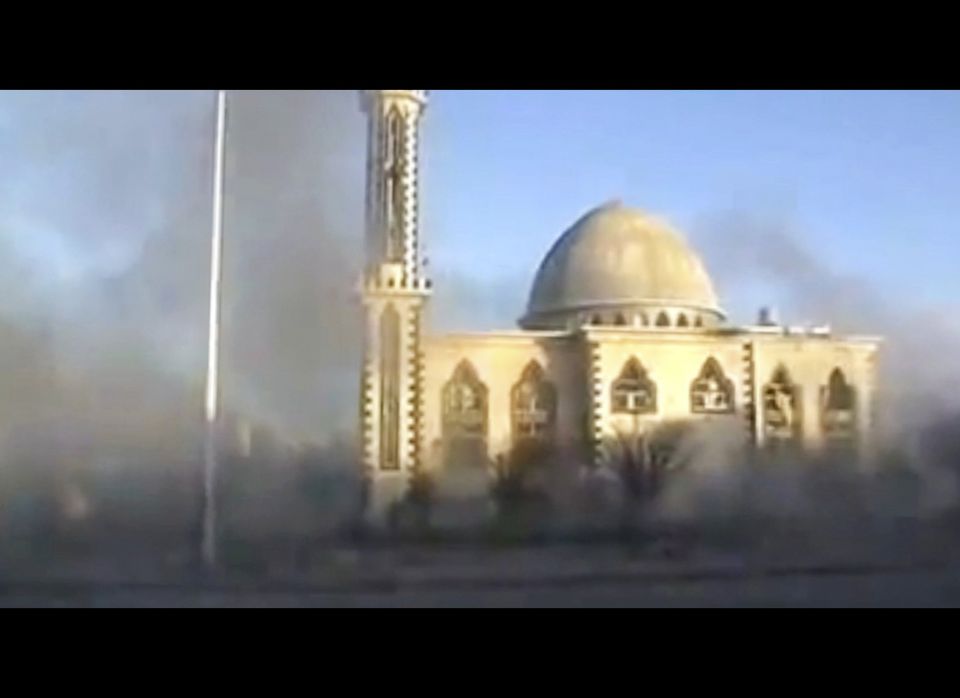 1 / 21
This image from amateur video made available by Shaam News Network on Thursday, Feb. 9, 2012, purports to show smoke filling the air near a mosque in Homs, Syria. (AP Photo/Shaam News Network via APTN) THE ASSOCIATED PRESS CANNOT INDEPENDENTLY VERIFY THE CONTENT, DATE, LOCATION OR AUTHENTICITY OF THIS MATERIAL. TV OUT
AP