ZAMALKA, Syria, Oct 4 (Reuters) - Sixteen-year-old Mohammad al Zeibaa lost his entire family in the sarin gas attack east of Damascus six weeks ago, surviving the world's deadliest chemical weapons strike in a quarter century only because he was out working a hospital night shift.

Mohammad's father, who rushed to the scene to help survivors, died from the effects of the sarin, as did his mother and five brothers and sisters who stayed at home.

The teenager now lives with a surviving cousin amid the ruined streets and half-collapsed buildings that scar the Zamalka neighbourhood and other districts of the Ghouta region on the edge of the capital.

Perhaps numbed by more than two years of bloodshed, he sheds no tears over the Aug. 21 sarin attack which killed hundreds of people and brought the United States and France to the verge of air strikes against President Bashar al-Assad's forces.

"We've been seeing people martyred every day - why not my family?" he said. Young men surrounding him nodded in agreement.

Already it is hard to tell exactly where the chemical rockets fell in the rebel-held Ghouta, a mix of suburban sprawl and farmland, because damage from conventional bombardment has reduced the area to a grey monochrome of rubble and wreckage.

Street after street is littered with smashed concrete and bent metal. One building, destroyed before the chemical attack, is sliced in half from top to bottom. On one floor, a kitchen can be seen complete with cabinets and washing machine. On another, the headboard of a double bed and a bedroom commode.

At the site where residents say a sarin-loaded rocket fell, only mounds of rubble stand amid scorched earth, remnants of houses and patches of garden ringed by narrow streets that were so packed with bodies on the night of the attack that they said it was impossible not to step or drive over the dead.

The rebels and their Western backers blame Assad's forces for the attack, which they say killed 1,400 people. Authorities say rebels carried it out to provoke Western intervention in a civil war which has already killed more than 100,000 people.

Like most people in Ghouta, Mohammad vows to remain steadfast until Assad's overthrow - a still distant goal after military gains by the president's forces.

He has become an integral part of a community struggling to administer itself despite clashes with government forces and a 13-month government siege that leaves everyone hungry and is starting to starve the youngest and most vulnerable.

Every day, Mohammad shows up to work at the field hospital near his home. Thin and child-like for his age, he is too small to bear arms but he resembles the men with his stoic appearance, broken occasionally by a quick smile.

Like everyone else he eats many meals without bread, a staple now in short supply, and finishes perishable food quickly because it cannot be refrigerated. The rebel area has been off the electricity grid for a year.

At night he spends his time in the dim half light of rechargeable torches and the droning of electricity generators, along with their noxious fumes. To get around, Mohammad uses a bicycle due to fuel shortages and lack of public transport.

At home his landline telephone stopped working long ago and he has no use for a cell phone because it is hard to get a signal. If he needs to communicate, he uses a walkie-talkie to contact a dispatcher and ask him to relay messages.

Most of the rebel fighters are further west, on the front line near the Damascus ring-road which separates the rebellious eastern suburbs from the centre of the capital.

But during a short drive through the area, rebels could be seen two or three to a motor bike, their guns slung over their shoulders. Others walk around, congregating around rebel checkpoints. Almost every family has a gun, sometimes laid openly on a table or hanging by the door.

Such is life in the rebel territory linked to central Damascus only via two government checkpoints. There, soldiers confiscate food, baby milk and medicine and at times refuse entry even to people who have queued for hours.

Residents, especially the men, cannot leave their district and venture into government controlled Damascus without risking indefinite detention when they try to pass the checkpoint.

For food they rely on locally raised poultry and meat, as well as olives, citrus, eggplant and green peppers. But in May, government bombardment set ablaze this year's wheat crop.

The handful of doctors complain that dysentery and a lack of antibiotics endanger lives. They say the siege is starting to cause malnutrition among pregnant mothers and children, and that some babies have already died of starvation.

The one thing that East Ghouta has in abundance is men willing to fight.

But supported by financing from underground charities and fund-raising by families abroad, it has also set up a network of pro-rebel organisations tackling the community's medical needs, communications, humanitarian relief, education and sanitation, and ensuring something that approximates to the rule of law.

With most schools either bombed out or unsafe, residents have organised "revolutionary education" centres for small children.

Teenagers, however, go to work.

The most popular choice for boys and girls as young as 14 is medical work, where volunteers are needed and parents feel their children are as safe as they can be in a war zone.

When the sarin was unleashed on the East Ghouta, dozens of teenage nurses administered injections of atropine - a sarin antidote - to survivors. And many did so at their own peril.

Sixteen-year-old Faris, whose home is a short bike ride away from where the chemical rockets fell, woke early the following morning unaware of the calamity that had occurred in the night.

He learned about it at 7 a.m., on his way to the bicycle shop where he works before his shift at the field hospital.

He rushed to the hospital and treated dozens of people.

"I was shocked. I'm still remembering things that I didn't at that time," he said, sitting up in his bed at the field hospital, his head loosely bandaged and his complexion pale after he too was wounded in the subsequent bombardment.

"For example, today they were telling me that one of my neighbours, Abu Leila, had died in the chemical attack. And after they told me, I remembered that I had seen his body that morning when I arrived at the field hospital," he said.

Shortly after he arrived and helped remove dozens of bodies and attend to dozens more survivors, many of them foaming at the mouth and struggling to breathe, Faris developed minor sarin gas symptoms including nausea and eye irritation.

No one wore proper gas masks, which are unavailable in Ghouta. Some first responders used surgical face masks or wet towels at the site in a vain effort to protect themselves.

Survivors still suffer from insomnia, severe headaches and the mental fog that they say began after their exposure to sarin gas. Everyone around Zamalka speaks of a night of horror that they liken to Armageddon.

Mohammad, who was on duty at the hospital that night, said he heard an unusual-sounding rocket shortly before 2 a.m. It seemed to land without the blast of mortar or tank shells.

It was not long before the dispatcher on the walkie-talkie started saying there had been a chemical attack, and ordered volunteers and medics to the scene to help.

Then came chaos. As people started to move bodies and take survivors to the field hospital, another rocket carrying sarin hit the crowd, killing four medics and many volunteers.

Locals say they have become accustomed to army shelling whenever they congregate, a practice they say is done on purpose in order to target the largest number of civilians.

No one was sure how many chemical rockets fell, but fierce shelling with conventional explosives continued all night, killing more volunteers and sarin survivors, especially those who fled to higher floors seeking fresh air, escaping the heavier gas which lingers at ground level.

Survivors describe the events as a blur, punctuated by moments of nightmarish lucidity.

There was the graveyard that gave up its dead as relentless bombardment pounded its grounds.

There were dead animals - goats, sheep and cats, and a tree under which 300 birds lay on the ground, one survivor said.

There were living people mistaken for dead, thrown in among the bodies awaiting burial, until a movement of the head or the faint sound of their moaning saved them.

People insist they took extra care that day to ensure that no body was lowered into the mass grave before a final confirmation of death by one of the few doctors there.

They continued to bury their dead for 16 straight hours, then finding more bodies trapped inside homes for several more days during which fierce government bombardment continued.

Many of the dead were entire families. Some died in their sleep, or together in the living room. One family of five died huddled in a bathroom, apparently seeking shelter from the gas.

Most of the dead were identified by a relative, a friend or a neighbour. But many were newcomers, Syrians who had been displaced from elsewhere.

"We found entire families dead in their homes, and no one in our community knew who they were," said an army defector and media activist who used the nom de guerre Mohammad Salahedinne.

One family had scribbled the name of their town, Jarba, on the wall of their living room, and that was how local people figured out their place of origin.

Mohammad recalls giving atropine injections to dozens of survivors brought into the field hospital that night including, unsuccessfully, his own father.

Asked to name the fallen in his family, he began with the distant relatives first, and continued in a soft but matter-of-fact voice.

"Sheikh Rashad Shams died, and his wife Baraa Nadaf. Shifa Shams. Shayma Shams. Mawada Shams and a boy she was due to give birth to in a week. Those were my maternal uncle's family.

"Then my paternal uncle's family: Anas al Zeibaa, Mahmoud and Ahmad al Zeibaa, and Khaled and Mashhoor, my cousins. And my parents, Nasib al Zeibaa and Moameneh Shams and, what's his name, Samer al Zeibaa, 21, the eldest.

"Then Aya, Fatimeh, and who else? Oh yes, Asma al Zeibaa, and the last one Abdullah al Zeibaa."

Asked who was his favourite, he smiled and said it was four-year-old Abdullah. 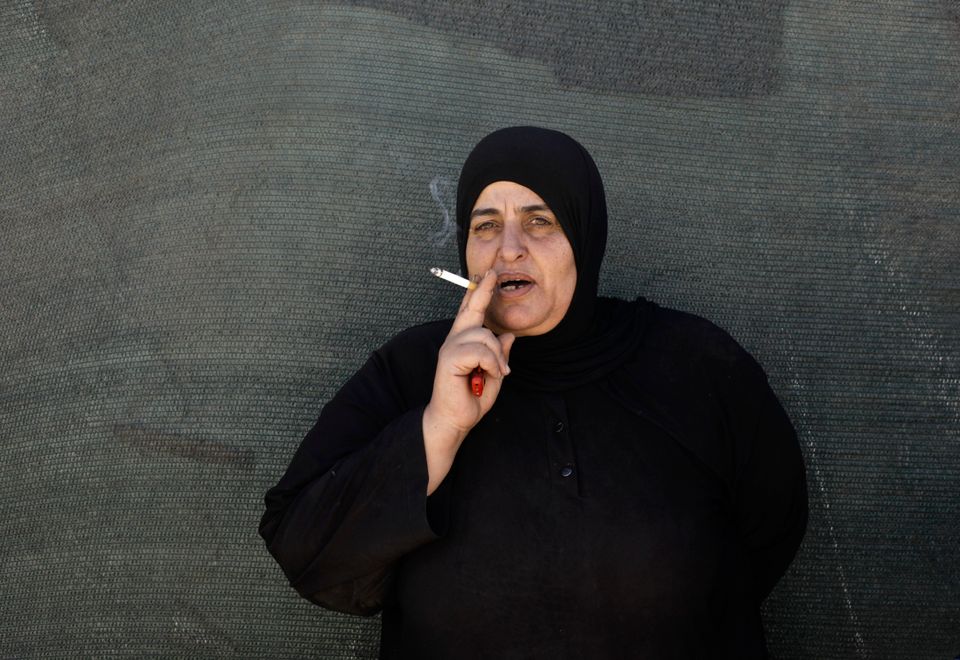