In my previous blog on the Syrian Refugee crisis, I proposed resorting to Sorcery to find out what the best solution ought to be. This naturally leads to the question: can Magic be used to put such a solution into effect? It so happens that Occultists in the twentieth century certainly believed it and with their followers attempted to do so. 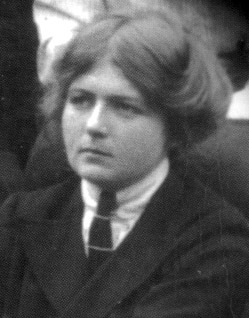 During the Second World War, the British writer and occultist Dion Fortune believed that Germany was affected by negative spiritual forces. She wrote:

I conceive of this dark influence as the accumulation of evil thought-forms in the group mind of the race and place ... There can be no reform of Germany as a political factor in Europe until this dark psychic heritage that contaminates her is dispersed and neutralised.

She therefore proposed the following solution:

There is one thing, and one thing only that can disperse this dark cloud of ancestral evil and set the souls of Germans free, and that is the Power of the Christ, and we must bring this power to bear.

Mentioning the C Word may sound odd coming from a magician, but many outside the world of the occult underappreciate the fact that occultists have their own conception of Christ - which radically diverges from all the dogmas of the Christian Churches. The Christ of the Occultists is a cosmic force that at once represents Beauty and harmony, as well as the ideals of self-sacrifice; it is a divine mediary which mystically and theurgically heals the divides within Humanity and unites it as a whole; and is more a product of both Neo-Platonic and Gnostic thinking than that of those traditions' contemporaries - the theology of the fathers of the early Christian Church itself.

Thus, when Dion Fortune suggests to the members of her mystery school -

Let us visualise Germany as a vast marsh of human helplessness and ignorance covered by the thick black cloud of ancient evil; the sunlight of the Christ cannot reach it to dry up the stagnant waters and give it health and fertility until this cloud has been dispersed. Then let us see the Angels of the Lord hovering over it and directing lightning flashes at it from the points of their swords. These flashes cause thunder-storms to break out in the cloud; rifts appear, the cloud begins to break up and the Sunshine of Christ shines throughout the land beneath. This method, if persisted with, will soon disperse the cloud, and remember we are striking at the cloud, and not the land beneath it. Once this is dispersed, the healing sunshine will do the rest.

She is in fact following people like Martinez De Pasqually, an 18th century ceremonial magician who saw occultists' role as saving the Universe by powerful invocations and theurgical operations - all view through a "Christian" prism.

Gareth Knight, writing in 1993, commented regarding the above passage:

Fifty years on, we might pause to reflect whether these remarks about Germany could equally be said about most nations of the world, including our own. And whether a similar remedy might not be appropriate.

Fast-forward to the present day: replace Germany in the above passage with Syria, and one has a magical method for dealing with the original disease of which the current refugee crisis is but a symptom. Now the idea of imposing "Christ," (even if it is a Neo-Platonic / Gnostic conception thereof) upon a predominantly Muslim country, might raise hackles of Political Incorrectness amongst people who are sensitive to such issues, but the unfortunate fact remains: even if we were to remove all references to religion from the matter, by expressing our disapproval of the civil war in Syria, we are already imposing a value judgement on the country: Our way of life is better than yours.