By Erika Solomon and Angus MacSwan

BEIRUT Feb 14 (Reuters) - Government forces and opponents of President Bashar al-Assad clashed in cities and countryside across Syria on Tuesday and Arab officials confirmed that regional governments would be ready to arm the resistance if the bloodshed did not cease.

The western city of Homs, heart of the uprising against Assad's 11-year-rule, suffered a bombardment of pro-opposition neighbourhoods for the 11th day running.

With Assad seemingly oblivious to international condemnation of his campaign to crush the revolt, Arab countries led by Saudi Arabia prepared for a new resolution at the United Nations in the next few days which would support a peace plan forged at a meeting in Cairo on Sunday.

But Arab League diplomats said that arming the opposition forces was now officially an option.

A resolution passed at the meeting urged Arabs to "provide all kinds of political and material support" to the opposition.

This would allow arms transfers, they confirmed to Reuters.

"We will back the opposition financially and diplomatically in the beginning but if the killing by the regime continues, civilians must be helped to protect themselves. The resolution gives Arab states all options to protect the Syrian people," an Arab ambassador said in Cairo.

The threat of military support was meant to add pressure on the Syrian leader and his Russian and Chinese allies but it also risks leading to a Libya-style conflict or sectarian civil war.

"I suspect we will see a further militarisation of this conflict, with potentially quite widespread and dangerous consequences," said analyst Salman Shaikh, director of the Brookings Doha Center.

Smuggled guns are already filtering into Syria but it is not clear if Arab or other governments are behind the deliveries. Weapons and Sunni Muslim insurgents are also crossing from Iraq into Syria, Iraqi officials and arms dealers said.

Assad, whose Alawite-minority family has ruled the mainly Sunni Muslim country for 42 years, is trying to stamp out pro-democracy demonstrations and insurgent attacks. He dismisses his opponents as terrorists backed by enemy nations in a regional power-play and says he will introduce reforms on his own terms.

While the uprising initially involved rallies by civilians, armed insurrection by the Free Syrian Army, made up largely of army defectors, is increasingly coming into play.

The government says at least 2,000 members of its military and security forces have died and the United Nations says its forces have killed several thousand people.

CITIES UNDER THE GUN

In Homs, a strategic city on the highway between Damascus and commercial hub Aleppo, the pro-opposition neighbourhood of Baba Amro was struck at dawn by the heaviest shelling in five days, the Syria Observatory for Human Rights said.

Six people were killed, it said, adding to an estimated toll of more than 400 since the assault began on Feb.3

"They are hitting the same spots several consecutive times, making venturing out there impossible. The shelling was heavy in the morning and now it is one rocket every 15 minutes or so," activist Hussein Nader said by satellite phone.

Another opposition activist, Mohammad al-Homsi, said the humanitarian situation was getting worse, with food and fuel short and prices soaring. Army roadblocks had been set up around opposition districts, Homsi said from the city.

In Rankous, a rural town near Damascus, many residents had fled from government shelling, activist Ibn Al-Kalmoun said. Bombardments were also reported in the town of Rastan.

In other action reported by activists, security forces and army defectors clashed in the countryside near Aleppo, where the government appears to have strong support. Three people were killed there.

Two people were killed in a skirmish between rebels and government forces in Albu Kamal, Deir Azzour province, they said, and arrests campaigns continued in Jabal al-Zawiya region.

Foreign media have to rely on unverified activists' accounts because the Syrian government restricts access. But reports from neutral international organisations confirm a general picture of widespread violence.

The Syrian Foreign Ministry rejected criticism from U.N. Human Rights Commissioner Navi Pillay, who in a speech to the U.N. General Assembly on Monday accused Assad of launching an indiscriminate attack on civilians.

"The High Commissioner become a tool in the hands of some countries that are targetting Syria and are ignoring the terrorist crimes committed by armed groups," it said.

At the United Nations, diplomats said a draft General Assembly resolution, supporting the Arab League plan and calling for the appointment of a joint U.N.-Arab League envoy on Syria, could be put to a vote on Wednesday or Thursday.

The resolution, seen by Reuters, is similar to a Security Council draft vetoed by Russia and China on Feb. 4 that condemned the Assad government and called on him to step aside.

There are no vetoes in General Assembly votes and its decisions are not legally binding.

An Arab League proposal for a joint Arab-U.N. peacekeeping mission be sent to Syria elicited a guarded response from Western powers, who are wary of becoming bogged down militarily in Syria. It was rejected out of hand by the Assad government.

Russia, Assad's main ally and arms supplier, also showed little enthusiasm, saying it could not support a peacekeeping mission unless both sides stopped the violence first.

U.S. Secretary of State Hillary Clinton said in Washington that the peacekeeper proposal would be tough to get through, given Russian and Chinese support for Damascus.

The Syria conflict, one of a series of revolts in the Arab world which saw the leaders of Tunisia, Egypt and Libya toppled last year, is shaping up to be a geopolitical struggle reminiscent of the Cold War.

Russia wants to retain its foothold in the region and counter U.S. influence. Assad is also allied to Iran, which is at odds with the United States, Europe and Israel.

The Arab drive against Assad is led by Sunni-ruled Gulf states, who also see Shi'ite Iran and its shadowy nuclear programme as a threat. 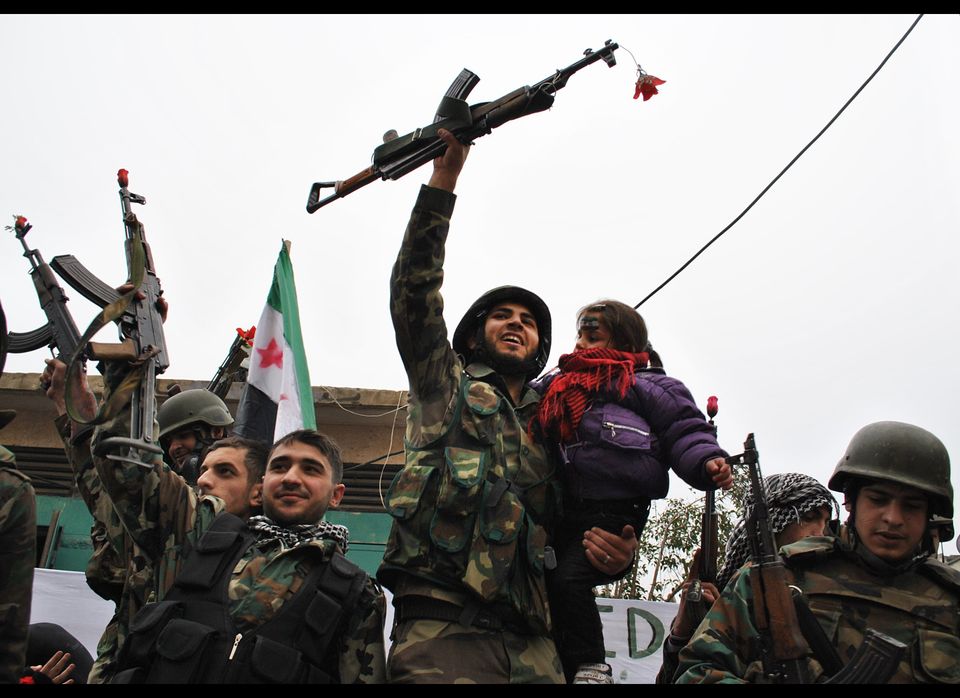 1 / 8
In this Thursday, Jan. 26, 201, file photo, Syrian army defectors, celebrate shortly after they defected and join the anti-Syrian regime protesters at Khaldiyeh area in Homs province, central Syria. As the Syrian revolt grows deadlier by the day, President Bashar Assad's greatest advantage lies in the lack of unity among the disparate forces opposing him. For nearly a year, a chorus of voices has risen against the regime: exiled dissidents who spent years locked in Syrian prisons, increasingly bold rebel fighters who see force as the only option and tech-savvy young people desperate to cast of a stagnant dictatorship. (AP Photo, File)
AP