Despite a brutal conflict that has left more than 150,000 people dead, the speaker of Syria's parliament announced on Monday that the country will hold presidential elections on June 3. While Jihad al-Laham called on his countrymen to "exercise their right to elect the president of the Syrian Republic," no one expects any candidate but embattled President Bashar Assad to take home "victory" in what can only be described as extremely rigged polls.

Here are five reasons why the June election is just another cruel joke played on Syria's suffering population.

1. Who will dare to run against Assad?

While the president has yet to formally announce his candidacy, Assad is widely expected to run. Assad and his wife seemed to have shifted to campaign mode in recent weeks -- appearing frequently in public and posting even more frequently about these appearances on their Instagram account.

But who will Assad run against? According to today's announcement in parliament, candidates have until May 1 to register. However, as Ben Hubbard explains in The New York Times, recent changes in the elections rules and constitution make it incredibly unlikely that Assad will face meaningful opposition. In order to run, candidates can't hold citizenship in another nation, must secure the support of at least 35 members of parliament and have spent the past 10 years continuously in Syria -- effectively ruling out many opposed to the Assad regime.

2. How will the millions of refugees vote?

More than three years into the war, nearly 2.6 million Syrians have registered as refugees abroad, and more than 6.5 million people are displaced within the country. International aid agencies estimate that in total, more than a third of the country's population has been forced to leave their homes.

According to the Syrian parliament, polls for Syrians abroad will be organized at the country's embassies on May 28. Yet somehow we sincerely doubt all eligible voters among the 100,000 Syrians sheltered at the Zaatari refugee camp in Jordan will make it to the embassy in Amman. Will Syrians who have fled Assad's militias and sought refuge in Lebanon head to the embassy in Beirut? Will those who spoke out against the authorities choose to face the regime's representatives?

3. Polls will only be organized in those parts of the country under government control.

Syrian lawmaker Sharif Shehadeh told the Associated Press on Monday that there will not be any voting centers in areas controlled by gunmen. While Assad's forces have control over the capital and large parts of the center of the country, many areas in the north and south are held by rebel forces. Voters who happen to be based there are out of luck. "If we are being blockaded from even eating bread, how can I vote?" opposition activist Ahmad Alqusair wondered aloud to the AP.

4. Would you risk being hit by a bomb or an improvised explosive device in order to go vote?

These are just a few of the incidents that struck Syria in the past two days. Venturing out of the open in the country's cities is a dangerous affair, and in many parts of the nation the security situation may just be too precarious for voters to head to the polls. Would you risk being hit by a bomb or an IED in order to go vote?

5. The elections will likely torpedo the teeny, tiny bit of hope that's left for peace talks.

The U.N. warned on Monday that holding presidential elections will endanger whatever is left of the Syrian peace process. While it appears unlikely that the Syrian conflict would be settled once and for all through negotiations, diplomats argue that the elections would make any kind of rapprochement extremely unlikely. "If there is an election, then my suspicion is that the opposition, all the oppositions, will probably not be interested in talking to the government," Syria envoy Lakhdar Brahimi told the members of the U.N. Security Council just a few weeks ago.

Unsurprisingly, the Syrian opposition denounced the announced vote as a farce, arguing that only Assad supporters will head to the polls and accusing the president of holding a vote "over the blood of Syrians." White House spokesman Jay Carney echoed the opposition's statements, saying the Syrian president "is making a mockery of his own pretentions to be a democratically elected leader." 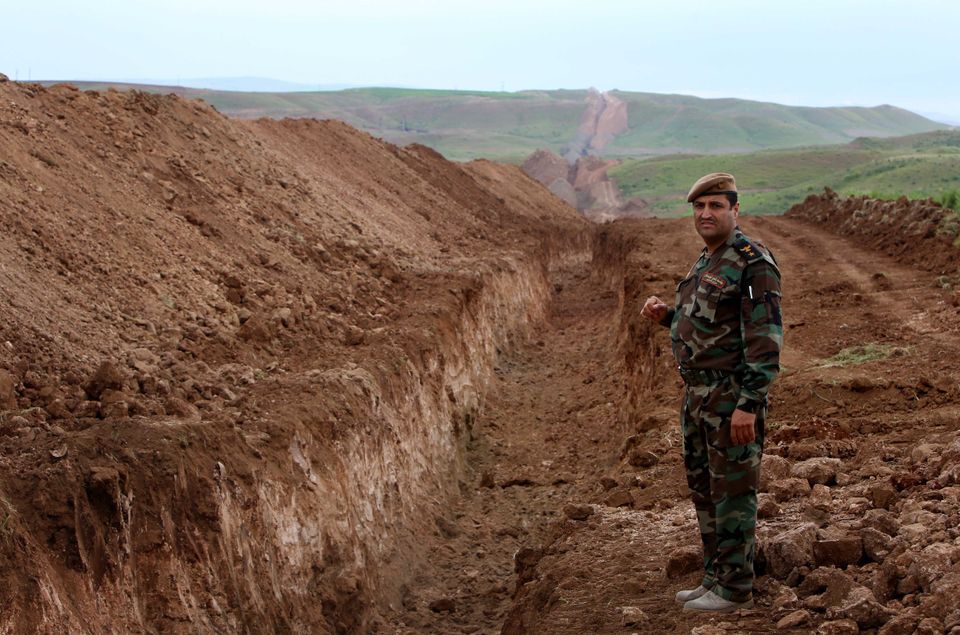 1 / 21
A member of the Iraqi security forces looks on during the digging operations to build a trench on the northern Iraqi border with Syria to prevent people from crossing over into Iraq's autonomous Kurdistan region, on April 13, 2014 in Zakho. (SAFIN HAMED/AFP/Getty Images)
Getty Images