Not everything in America has to be about Republican and Democrat. There are times when it should simply be about humanity, and about how we define what it means to be an American through our collective values -- values forged along the path to liberty. Times like when the images of drowned children washed up on a beach shake us to our core and beg us to ask, "How can I help?"

In 1885, the people of France, our first ally, gifted us with the Liberty Enlightening the World statue, what we now commonly call the Statue of Liberty. It has stood in our most prominent harbor for generations, proudly proclaiming:

"Give me your tired, your poor, Your huddled masses yearning to breathe free, The wretched refuse of your teeming shore. Send these, the homeless, tempest-tossed to me, I lift my lamp beside the golden door!"

Until the 1950s, it served alongside Ellis Island as a welcoming center for millions of our ancestors, who came (often with no documentation whatsoever) seeking refuge and a chance to achieve the "American Dream."

Contrary to common myth, we haven't always been a welcoming nation. Each time we've attempted to shut people out in the past, it's been out of fear of the "other." During WWII, most Americans were opposed to opening our doors to Jewish refugees. Those we did let in contributed to the development of our nation in immeasurable ways - the likes of Albert Einstein and Secretary Madeleine Albright were among them. 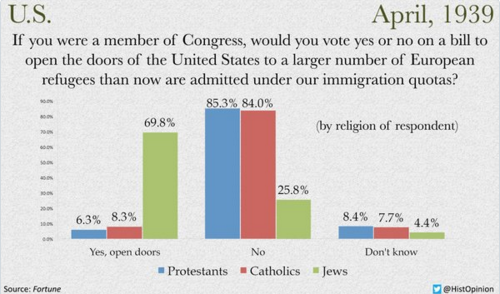 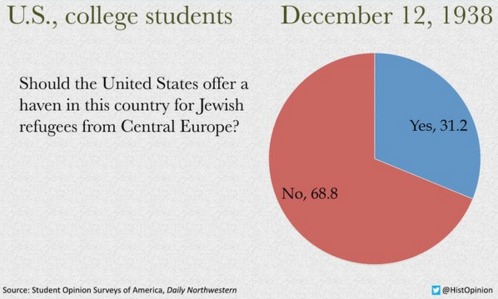 Politicians refusing to welcome Syrian refugees can certainly claim they are doing so out of expediency and fear. But what they can't claim is that they are doing so in alignment with their faith, or to protect the safety of all of their constituents. For those of us who are Christians, every Sunday we raise our hands and loudly proclaim our allegiance to Jesus Christ, our Lord and Savior, who was once a Middle Eastern refugee fleeing violent persecution.

Almost every major religion mandates being a welcomer:

Hebrew Bible: "The strangers who sojourn with you shall be to you as the natives among you, and you shall love them as yourself; for you were strangers in the land of Egypt." - Leviticus 19:33-34

New Testament: "Do not neglect to show hospitality to strangers, for thereby some have entertained angels unawares." - Hebrews 13:2

Of course, in light of the horrific terrorist attacks over the weekend in Paris, it is right that officials here in the U.S. and abroad would evaluate security measures. Unfortunately, some leaders, including presidential candidates, are calling for security measures that would undermine our commitment to religious freedom and beat back decades of slow, painful progress towards ethnic inclusion.

If the politicians suggesting we keep Syrian refugees out were doing so out of concern for the safety of their constituents, they'd have taken measures to root out domestic terrorists of every faith -- like the KKK -- long ago. The KKK and its allies over the decades is responsible for slaughtering thousands of Americans, and as recently as this year influenced mass shootings and church burnings on our soil. On the contrary, according to The Economist, since 2001 the US has admitted roughly 750,000 refugees, and in all that time, zero have been accused of involvement in domestic terrorism aimed at the US homeland. When we react out of fear, particularly fear rooted in religious or ethnic prejudice, we run the risk of ignoring our role in the creation of global politics. Without the US invasion of Iraq in 2003, there would have been no al-Qaeda in Iraq, and al-Qaeda offshoots like ISIL wouldn't have had the opportunity to fill a power vacuum. Moreover, from the knowledge we have at present, the attackers were not refugees. They were born in Europe. The Syrian passport found near one of them was a fake.

Let's also be clear that while "breaking news" of governors who are "closing their borders to Syrian refugees" has dominated the airwaves in the past few days, by law governors do not have that authority. According to PBS NewsHour, under the Refugee Act of 1980, "President Obama has explicit statutory authorization to accept foreign refugees into the United States." Simply put, suggesting that we not accept refugees in this instance due to their faith or nation of origin is not only a blatant violation of the US Constitution, it's ethnic discrimination and would cause us to repeat mistakes of our past. In the face of hostility and fear, let's choose love.

Syrians are experiencing the terror and brutality of ISIS on a daily basis in their own homes. That's why so many are risking their lives to flee Syria and seek refuge in Europe or North America. We must continue to be welcomers. Our values, our Constitution, and our humanity demand it of us.