ISTANBUL -- If it weren’t for the videos coming out of Syria -- often shot on cellphones -- that are regularly uploaded to social media sites and used by news agencies, the outside world would know little of what’s happening inside the war-ravaged country.

This week, a small group of Syrian filmmakers and activists are honoring those who have risked their lives to document the truth by putting on a three-day event called Syria’s Mobile Phone Film Festival. 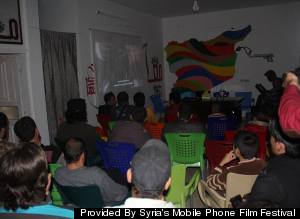 Syrians watch one of the films shown by Syria’s Mobile Phone Film Festival at one of the venues in Syria.

“Since the beginning, the mobile phone helped shape the visual identity of the Syrian revolution,” Zaher Omareen, one of the festival organizers, told The WorldPost over Skype. He's currently living in the U.K. and pursuing a PhD in documentary filmmaking. “The mobile phone is a tool for resistance.

From Oct. 15 to Oct. 17, a series of short Syrian-produced films shot on phones are being shown in areas of northwestern and southwestern Syria, including Kafr Nabl, Aleppo, Atareb, Jabal al-Zawiya and Daraa. Some of these areas have been indiscriminately attacked by President Bashar al-Assad's regime in recent weeks. 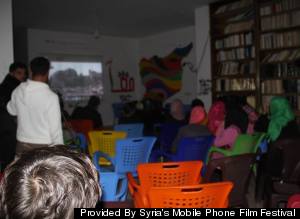 Syrians watch one of the films shown by Syria’s Mobile Phone Film Festival at one of the venues in Syria.

The northern Kurdish town of Kobani, near the Turkish border, was supposed to have its own screening, but the event was canceled when militants from the self-proclaimed Islamic State began attacking the area. The U.S.-led coalition is now conducting airstrikes against the extremist fighters around Kobani. The festival also plans to show the films in several European cities in the coming months.

A dozen Syrians -- local volunteers working in Syria, and a few based abroad -- collaborated to organize the film festival. They said they hope the event will inspire more Syrians to document what’s happening around them and embrace the arts as a way of coping with the seemingly endless war.

The short films (which can be viewed on the event's website) tell stories of children's lives cut short by war, regime barrel bombs, and life after detention. Omareen himself was arrested and later released by regime forces in the spring of 2011 for participating in an anti-government protest.

“This festival is about Syria, inside and out.” Omareen said. “From Syrian to Syrian, to make Syrians more involved and to help them think differently. The phone is not just a tool to record the news and events.”

Omareen said turnout has been high. The handful of film venues have been full for the first two days of the event, he said.

Several organizations, including the Alsharee Foundation for Information and Development, MENApolis, Baytna, and Friedrich Ebert Stiftung helped fund and support the event and its scholarships. 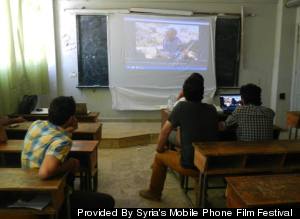 Three awards, each amounting to $1,000, will be given to filmmakers in the categories of one-minute film, short documentary, and long documentary. Winners will be announced at the end of the month. The team has already put on a workshop for Syrian citizen journalists and given out film scholarships.

“An artistic space is necessary,” he said. “People have been without entertainment for months. It’s horrible.”

He said he isn’t surprised that the film screenings have been so popular.

“There is always a space for life,” Omareen said. “Even during war.”