When the Arab Spring broke out in the Middle East in January 2011, seeds of protest that had been germinating for decades sprouted at an unbelievable pace in nearly every country in the Arab world. At the time, I was an undergraduate student studying abroad in Geneva, Switzerland, and was about to start an internship at Alkarama, an Arab human rights NGO. January and February marked the fall of Mubarak in Egypt and Ben Ali in Tunisia, and protests swelled in every Arab country. As February turned to March, NATO instituted a no-fly zone, just as my internship started. Dignity was at the forefront of every protest movement's demands; dignity in the face of decades of authoritarianism and repression.

The NGO is small, yet it submits a large portion of the cases from the Arab world to the UN human rights Special Procedures Bodies. In March, while violent repression was spreading, there was still hope for relatively peaceful transitions. The day I started work, the Syrian regime released a longtime human rights activist whose case the NGO had repeatedly submitted to the UN since his latest arrest two years earlier. It was part of a larger amnesty of political prisoners over 70, however, and as the majority of his sentence had been served, this was one of many empty gestures the Syrian regime would make to suppress protests. Like so many hopeful moments that spring, it would prove to be the exception to what would happen in the following years, not the rule.

Dignity was at the forefront of every protest movement's demands; dignity in the face of decades of authoritarianism and repression.

The NGO's legal team and administration together comprised no more than fifteen people, plus the officers in the field who collected testimonies from victims, families, lawyers, and witnesses to human rights violations. While prior to 2011, no more than a few dozen human rights violation reports arrived on an average day (with exceptions), reports of violations grew exponentially as governments turned their security services and live ammunition on peaceful protests. Field officers collected lists and testimonies of hundreds of people each day, placing themselves in extreme danger in the process as human rights activists were being rounded up, detained, and tortured. The reports included crucial legal information on victims as well as the place and manner of their injuries, to provide the basis for an urgent appeal to the UN. 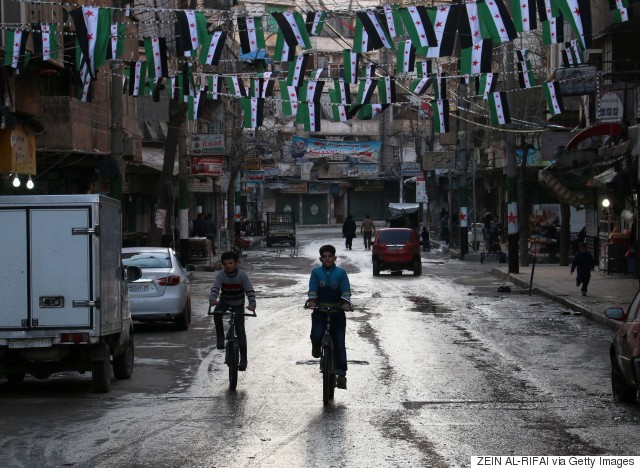 Syrian boys ride their bikes under pre-Baath Syrian flags, that was adopted by the Syrian revolution during the uprising, in the northern Syrian city of Aleppo on March 15, 2015. (Zein Al-Rifai/AFP/Getty Images) As a legal intern who spoke both French and Arabic, I was translating, transliterating and consolidating reports, as well as writing drafts of reports and communiqués to the UN Special Procedures. The abject cruelty against civilians that was carried out in almost every country was (and is) horrific-- from shrapnel that shredded through boys and girls, to unconscionable torture in detention centers, to now hundreds of thousands of murders-- all at the behest of authoritarian governments and enacted by state security services.

These so-called "Hama rules" conformed to the way Hafez al-Assad, Bashar al-Assad's father, treated protesters in 1982 when his forces massacred tens of thousands of innocent civilians, as demonstrations in the town Hama tilted towards an uprising. In the digital age, with a generation of youth who had grown up under authoritarianism and were disenchanted with their end of the bargain, these actions only served to fuel the anger and frustration experienced by millions. Citizens persisted in demanding their basic human rights, with the tools to coordinate and share information that their forebears lacked, and every violation evinced a backlash of demonstrations, and often further violence.

It's easy to feel as if you're screaming into a void as case after case is carefully documented and presented in multiple languages, and still, the carnage continues.

It was overwhelming to immerse myself in so many reports of horror each day, as I'm sure it was for all of my colleagues, and I was grateful for the trust placed in me and honored to do the work. I called US Embassies throughout the Arab world for updates and information, and one by one, many of them closed their doors as May approached. 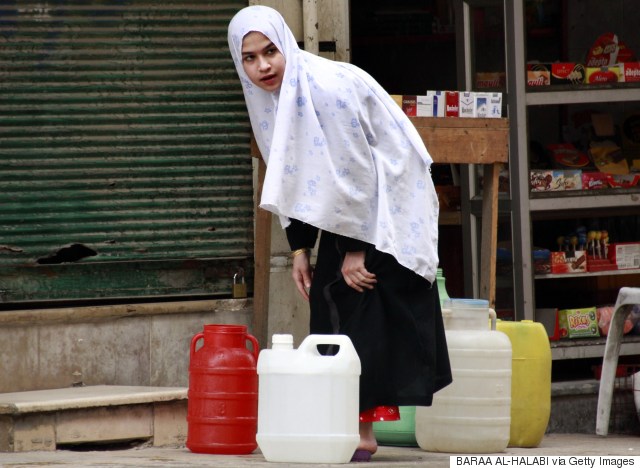 A Syrian girl prepares to carry jerrycans filled with water in Aleppo on May 8, 2014 as residents of the northern city suffer constant water shortages due to the three-year-long conflict. (Baraa Al-Halabi/AFP/Getty Images)

I learned more than I could have imagined about how the protests unfolded on the ground as I filed report after report. The senior legal team of professional human rights officers also had to keep up with their ongoing cases and make contact with field officers who were in the line of danger every day. The longtime staff had a seemingly inexhaustible ability to absorb the trauma and horror of thousands of victims, and still press on despite the maddening bureaucracy and legal red tape associated with the human rights field. The field officers faced death for their work and still kept investigating, reporting, and surviving. I could not have had more inspiring colleagues from whom to learn my first, difficult lessons in legal human rights work.

It's easy to feel as if you're screaming into a void as case after case is carefully documented and presented in multiple languages, and still, the carnage continues. Five years after the fall of Mubarak, it still feels that way, especially in the cases of Libya, Yemen, and Syria. Civilians have paid the price for their countries' descent into chaos, and the interventions of outside powers has only served to worsen conditions. Initially hailed as a foreign intervention success story, post-war Libya is a failed state. Tens of thousands of refugees that arrived on the beaches of Europe this year came via its lawless shores. Yemen is being torn apart in a Saudi-Iranian tug of war. Syria is a bloody patchwork of armed groups and foreign air forces, and more than half of its population is displaced. More than four million Syrian refugees have fled the country and almost eight million Syrians remain displaced inside. Syrians are starving to death, fleeing barrel bombs and guided missiles and bullets and beheadings and stonings and torture. Civilians are paying the price in blood for the perpetuation of the conflict by multiple foreign and domestic actors.

Syrians are starving to death, fleeing barrel bombs and guided missiles and bullets and beheadings and stonings and torture.

An international consensus and cease-fire between the foreign states at war within Syria would be a step in the right direction. A political settlement that would include actual Syrians at the negotiation table would be another. Western responsibility-sharing in the refugee crisis, that would include a fundamental restructuring of the broken global refugee regime, would be an even bigger one. But even these steps (and they are truly baby steps towards regional stability) seem improbable at the moment.

As the hope that permeated the first days of those historic revolutions fades, people in Arab countries as well as in the US and Europe have been left with an identity crisis. Who are we as people, and as nations? What values will we stand for? What does global responsibility entail, and what is it worth? Like Yugoslavia before it, Syria has forced the international community to come to grips with its shortcomings. The preponderance of power, finances, and military might (to stop violence as well as to commit it) lies with external powers. If all the groups on the ground in Syria laid down their weapons tomorrow, Russian, US, and so many others' bombs would still fall. The steady stream of arms and fighters ensures that the conflict will rage on, and civilians will bear the brunt of the costs, as always. 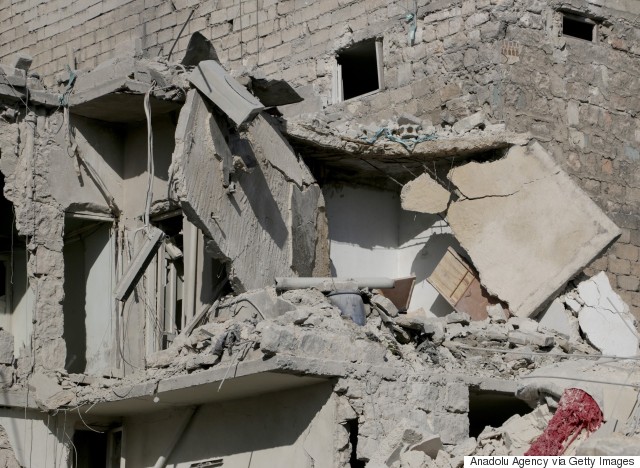 A damaged building after Russian airstrikes hit residential areas in the Kallese district of Aleppo, Syria on January 17, 2016. (Beha el Halebi/Anadolu Agency/Getty Images) Watching the Arab Spring from a desk in Switzerland, where some of the most important human rights legal work in the world is done, drove home the impotence of major powers. The supposed wheels of power in the field of human rights turned just a few minutes after the crisis erupted, and yet seemingly, more often than not, they were powerless to do anything in the face of the most egregious violations. State governments, particularly the US, Russia, Saudi Arabia, and Iran, could change the situation in Syria significantly if all parties earnestly and honestly sought a political settlement. The problem with this most fundamental of concepts, it seems, is that none are willing to make the compromises necessary to try.