One year ago, the world mourned the death of Alan Kurdi. He was a Syrian toddler who drowned on his way to a better life, and his image stuck with all of us, humanizing the tragic toll of a war that keeps being forgotten. Weeks ago, another Syrian boy, Omran Daqneesh, made headlines around the world. His stunned and bloodied face as he sat in the back of an ambulance was another reminder of the horror, another wake-up call to finally do something about the situation in Syria. The two boys have become symbols of what seems like a never-ending nightmare. They shocked the international community to the core and made many, for at least a short while, say enough is enough.

But with Syria in its sixth year of civil war, the rhetoric surrounding the conflict is worse than ever. When refugee numbers hit 4 million in July of 2015, it became the biggest humanitarian crisis of our time. Then, when the world witnessed recent terror attacks like those in France and Belgium, the events sparked some politicians to link refugees with terrorism. Despite evidence to the contrary, this rhetoric still exists today by some of the leading politicians in the United States, including in the Republican presidential nominee's call to ban all Muslims from entering America.

When I, Oula, first came to America from Syria, I started organizing protests at the White House in solidarity with my people to raise awareness and to get the media to cover the subject from the people's perspective. Very few Syrians did that at that time.

As a political asylee who was forced to leave my hometown of Damascus in 2005 due to direct death threats from President Bashar al-Assad to my parents on an account of their human rights activism, I know how the Syrian regime manipulates media in its favor. That's why it's crucial to fight the false accusations and the negativity spreading all over the news about Syrians, whether they are about the peaceful protesters in 2011 whom the regime called "terrorists" since the very beginning, or about the millions of Syrian refugees today who are also being accused of terrorism by many sides, not only by the Assad regime, but also by some American public figures and politicians such as Donald Trump. 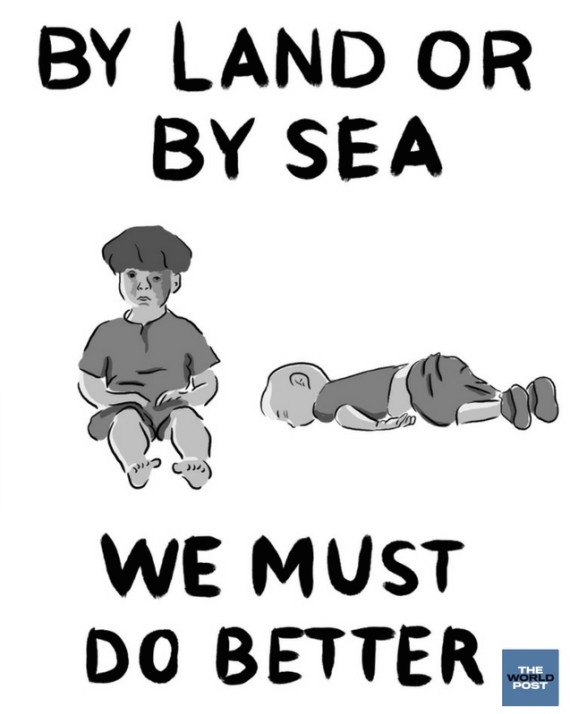 This hostile and derogatory dialogue around Syrian refugees in the United States that dominates discussions of the Syrian population needs to change. And one of the best places to start is in the classroom with programs like I Am Syria.

Realizing the need to counter discriminatory statements and false accusations targeting refugees fleeing their war-torn countries, grassroots movements such as I Am Syria have made it their mission to educate students on the Syrian conflict through recent news, articles with leaders in the Syrian movements and lesson plans geared towards the youth.The campaign, which creates an online curriculum for teachers to provide some context of these issues such as the so-called Islamic State and the refugee crisis has been designed to teach the facts, and acknowledge the suffering of the innocent rather than the fear of extremism. The goal is to give students a platform to act on, rather than just observe the conflict that is occurring. Lessons are designed to get students excited to generate change and open up the floor for conversations and positive solutions to combat the negative news about refugees presented in the media. And the images of Alan and Omran, while devastating, seem to increase student empathy for the cause.

From our experience, when students see Syrian children in that situation, their stories and suffering drive them to do something to help, raise awareness and also educate people around them about the issue.

What makes teaching the Syria conflict even more pivotal is how protests in Syria began. The catalyst for the Syrian uprising was a group of 9 to 12 year old boys writing graffiti on their school walls: "The government must go!" These efforts were followed by other students placing their green hands on the walls of their community. The underlying lesson for students is that no matter how small their voice might seem at a young age, it can lead to a global change.

When students see Syrian children in that situation, their stories and suffering drive them to do something to help.


"Learning about current world issues is essential, as it allows students to see and discuss how countries work together to address human rights violations and war," Thea MacFawn, a teacher from Latham, N.Y. using the curriculum, said. "Teaching about current world issues also provides students the space to articulate their ideas about how to address these conflicts while considering current U.S. foreign policy."

In our experience, the sad truth is that many students do not know much outside of what they see in the news about the Syrian conflict.

When asked why learning about the Syrian conflict in the classroom is important, James Hoehn, a now college freshman, said, "The younger generations live their lives with little concern for others and the troubles they face. They don't realize that they are blessed with what they have compared to what the Syrians have. One of the ways to get them to appreciate what they have is to teach them about the conflict through school."

Fellow student Antonio Pecoraro, a college freshman at the time, had a similar sentiment after learning about Syria: "Learning about the hardships the Syrian people have to endure allows students to envision a world that stretches beyond their community, and allows them to become proper and cultured individuals." 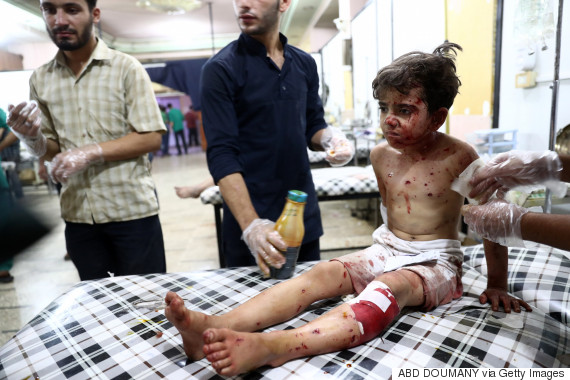 An injured Syrian child receives treatment at a makeshift hospital following a reported airstike on a rebel-held town east of the capital Damascus, on August 23, 2016. (And Doumany/Getty Images)

Syria is in the heart of the Middle East, the center of a troubled region, and every power whether it's regional or international has an interest in Syria's story today. Unlike Vegas, what happens in Syria never stays in Syria, and there are many reasons behind that.

Frustrated protesters cried for the international community's help, especially America's help, but no one answered. The world witnessed the bloody crackdown on civilians for years, and the use of chemical weapons by the regime, but turned a blind eye.


Since the creation of the lesson plans, I Am Syria gets hundreds of hits and downloads a month during each school year. Educators around the world have extended the material further and hold events to raise money and awareness for the people of Syria.

Moved by the stories and the struggle of Syrian refugees, Nicole Nederlk's elementary school students in Charlotte raised more than $500 this spring that they donated to the Convoy of Hope to aid refugees in the Middle East and Europe.

This young North Carolina classroom is not alone. Just this past March, a San Bernardino, Calif. classroom of 4th and 5th graders were inspired to do something after listening to the I Am Syria lesson plans. Selling bracelets to cover shipping costs and asking for shoe donations, they were able to send gently used shoes to a Syrian refugee camp in Jordan.

The work of teaching students compassion and kindness towards Syrian refugees is not a mission only for the United States in the eyes of the I Am Syria staff. They work to reach classrooms internationally as well. 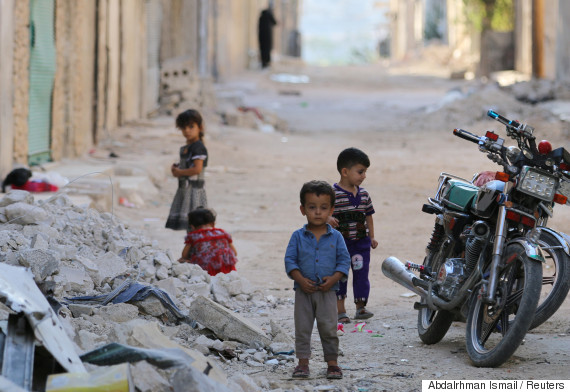 Karin Etman of the 4T1 Montessori Lyceum School in Amsterdam told us after utilizing the I Am Syria materials, "Together with our pupils we started to join forces and contribute in as many ways as possible to support Syrian people. With compassion, with thoughts, and with our voices, there is always hope."

Not only does I Am Syria help to educate young students, the material was also designed for refugee students. Jordan Hattar, the co-founder and director of Help4Refugees has worked extensively with Syrian refugees and their children inside the Zaatari Refugee camp in Jordan, teaching English. He explains, "I Am Syria has made learning about the Syrian conflict and assisting Syrian refugees more accessible to those who want to help. Firsthand, I have seen I Am Syria connect those who want to help, with those who need help."

New York student Calvin Gath was among the first students to get involved with the I Am Syria organization and be taught the educational material in 2012, just one year into the conflict. Calvin describes his thoughts when first learning the material:

"A few years ago, I remember thinking that Syria was just the next in line for their Arab spring revolution, but I didn't know about the mass atrocities against the Syrian people until I learned from I Am Syria."

'It's easy to get sucked into your immediate surroundings and ignore atrocities as they happen elsewhere in the world.'


For Calvin, the political climate around Syria and Syrian refugees is shocking. "The refugee crisis is such a critical debate in American politics right now," he added. "And for people to hold opinions on the decisions regarding the lives of millions of people, without understanding the grave circumstances under which those people live, is unfortunate."

Calvin is dedicated to spreading awareness. He told us he has relayed the importance the campaign on Facebook and to his local congressional representatives.

"It's easy to get sucked into your immediate surroundings and ignore atrocities as they happen elsewhere in the world, but after I Am Syria I feel obligated to help others when I can, even if it's something small," he said.

As the global citizens we are today, our world is connected. Tyranny, war, human rights violations and injustice not only affect one person, they affect all of us. When one nation suffers, we all suffer, and during these critical times, standing together is not only a moral obligation, but it is how we defend our freedom, the right for all mankind. We are all Alan Kurdi. We are all Omran Daqneesh. We are all Syrian.

Co-founder and executive director of SANAD