In the midst of escalating fighting between Syrian rebels and the government of President Bashar al-Assad, Syria has been plunged into an Internet blackout that some experts blame on a government effort to restrict the flow of communications, but that government officials have vigorously denied.

"In the global routing table, all 84 of Syria's IP address blocks have become unreachable, effectively removing the country from the Internet," reads a post on the company's blog, published on Thursday morning EST.

When this occurs, Internet traffic coming into and going out of the country stops. The government of Egypt during the Arab Spring uprisings in early 2011 implemented an unprecedented crackdown on the Internet, ordering the nation's Internet service providers to cease international communications.

Activists and authorities in Syria also told the AP on Thursday that cell phone networks and landlines were also unavailable in parts of the capital.

"The government has previously cut phone lines and Internet access in areas where regime forces are conducting major military operations," reports the AP.

AllThingsD notes that tweeters are using the hashtag #SyriaBlackout to discuss the outage.

UPDATE 1: Calling this the worst Syrian communications disruption since the uprisings began over a year and a half ago, Reuters reports that the Assad's forces are said to be preparing for a "military showdown around Damascus."

"Rebels and activists said the fighting along the road to Damascus airport, southeast of the capital, was heavier in that area than at any other time in the conflict," writes Reuters. At the time of writing, only the Dubai-based Emirates airline had suspended flights into Damascus, per Reuters.

Akamai followed that tweet with a chart visualizing a dramatic drop-off in Internet traffic that evidently shortly before 10:30 a.m. local time: 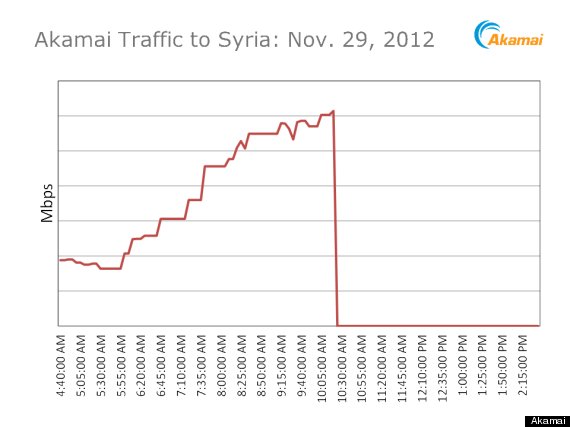 Some Twitter users are providing dial-up numbers that Syrian 'net users may be able to use to get back online.

"It is not true that the state cut the Internet. The terrorists targeted the Internet lines, resulting in some regions being cut off," the official said according to a "pro-government TV station," per Reuters. He also said that work is underway to repair the damage.

UPDATE 4: Google's Transparency Report, which monitors real-time global Internet traffic to Google products like YouTube and Gmail is also displaying a sudden halt to Internet activity in Syria on November 29. Google says data from its Transparency Report "visualizes disruptions in the free flow of information, whether it's a government blocking information or a cable being cut." At the time of writing, Google said that all its services were inaccessible in Syria.

UPDATE 5: Offering a possible explanation as to how Syria's Internet could have been throttled, GigaOm points to insights from the OpenNet Initiative during the 'net outage Egypt's government imposed on its people ahead of massive planned protests in 2011.

"The OpenNet Initiative has outlined two methods by which most nations could enact such shutdowns," GigaOm wrote during Egypt's Internet outage. "Essentially, officials can either close down the routers which direct traffic over the border — hermetically sealing the country from outsiders — or go further down the chain and switch off routers at individual ISPs to prevent access for most users inside."

Renesys, the data monitoring firm that first reported Syria's current Internet blackout, has updated its blog post to include more detailed information on the situation.

From the post: "The primary autonomous system for Syria is the Syrian Telecommunications Establishment; all of their customer networks are currently unreachable."

Renesys says that five Syrian networks are still active, but says that it is possible they are hosted outside of Syria. According to Renesys, offshore networks might not be "subject to whatever killswitch was thrown today within Syria."

UPDATE 6: Content delivery network CloudFlare said in a blog post that it believes Syria's mainline to the Internet, controlled by the government-run Syrian Telecommunications Establishment (STE), was deliberately severed.

Syria has 4 physical cables that connect it to the rest of the Internet. Three are undersea cables that land in the city of Tartous, Syria. The fourth is an over-land cable through Turkey. In order for a whole-country outage, all four of these cables would have had to been cut simultaneously. That is unlikely to have happened. [...] While we cannot know for sure, our network team estimates that Syria likely has a small number of edge routers. All the edge routers are controlled by Syrian Telecommunications. The systematic way in which routes were withdrawn suggests that this was done through updates in router configurations, not through a physical failure or cable cut.

This report conflicts with an earlier statement by Syria's communication minister, who said connection lines were cut by so-called terrorists.

Take a look at the slideshow (below) to see how Twitter is reacting to the blackout in Syria.