Multiple Internet monitoring services are reporting that the Internet has gone down in Syria.

The outage began Tuesday night, May 7, at around 9:45 p.m. local time in Syria. This is not the first time the country has suffered from an Internet outage. The same happened in November 2012 before being restored two days later.

At around 18:45 UTC OpenDNS resolvers saw a significant drop in traffic from Syria. On closer inspection it seems Syria has largely disappeared from the Internet.

Here is the graph accompanying the post by Umbrella Security Labs:

BGPMon confirmed it as well, as did networking firm Akamai.

Google also reports a drop in traffic in Syria: 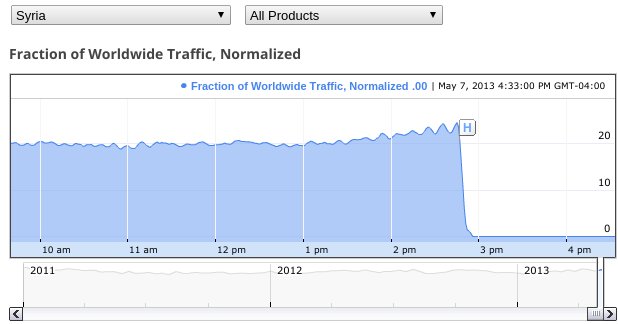