UPDATE: Renesys now reports that the internet in Syria has been restored.

The Internet has once again gone dark in Syria, with almost all of the country experiencing an online blackout.

Many of the organizations that monitor global Internet traffic report that Syria's Internet connection has gone dark in the latest of a series of outages that have hit the nation, which is currently embroiled in civil war.

Beginning around 8:30 a.m. ET on Thursday, Renesys, one of those Internet monitors, reported that 95 percent of the country is currently offline.

Here's a graph of the outage from Renesys, which says that only an Internet connection between Turkey and Aleppo, Syria's largest city, is working: 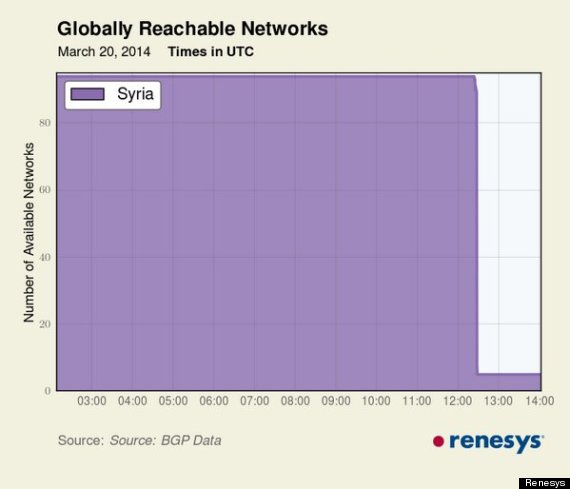 Akamai, a network security firm that also keeps an eye on Internet traffic, spotted the outage too: 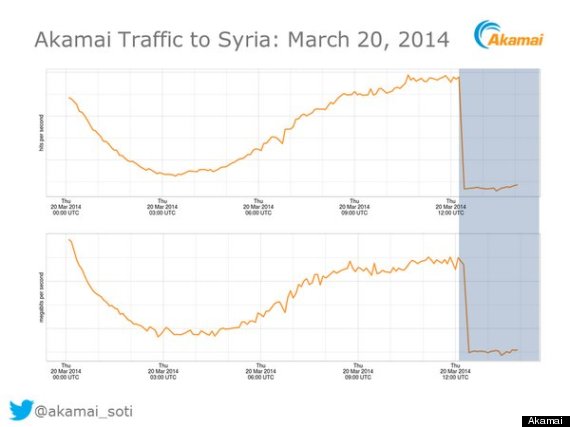 It is not clear at this time whether the outage is the result of a purposeful government action or a technical failure -- though if the past has any bearing, the government will likely blame technical issues regardless.

The Renesys report also notes that all of the failing network providers reached the Internet through the Syrian Telecommunications Establishment, which is controlled and managed by the Syrian government.

When speaking about the issue to Mashable in August of last year, David Belson, the editor of Akamai's State of the Internet report, said, "If those providers are all funneling back into what is, in essence, a single government-controlled gateway to get out of the country, then these independent providers have very little control over the international connectivity."

In other words, the Syrian government has the capability to orchestrate a blackout this large.