GENEVA (Reuters) - Detainees held by the Syrian government are being killed on a massive scale amounting to a state policy of "extermination" of the civilian population, a crime against humanity, United Nations investigators said on Monday.

The U.N. commission of inquiry called on the Security Council to impose "targeted sanctions" on high-ranking Syrian civilian and military officials responsible for or complicit in deaths, torture and disappearances in custody, but stopped short of naming the suspects.

The independent experts said they had also documented mass executions and torture of prisoners by two jihadi groups, the Nusra Front and Islamic State, also known as ISIS or ISIL. These constituted war crimes and in the case of Islamic State also crimes against humanity, it said.

The report, "Out of Sight, Out of Mind: Deaths in Detention", covers March 10, 2011 to November 30, 2015. It is based on interviews with 621 survivors and witnesses and evidence gathered by the team led by chairman Paulo Pinheiro.

"Over the past four and a half years, thousands of detainees have been killed while in the custody of warring parties," the Commission of Inquiry on Syria said.

The U.N. criticism of the Damascus government comes at a time when its forces have been advancing with the aid of Russian air strikes. A Moscow-backed government assault near the city of Aleppo this month marks one of the biggest momentum shifts in the five year war and helped torpedo peace talks last week.

Pinheiro, noting that the victims were mostly civilian men, told a news briefing: "Never in these five years these facilities that are described in our report have been visited and we have repeatedly asked the government to do so."

There was no immediate response by the government of President Bashar al-Assad, which has rejected previous reports.

"Prison officials, their superiors throughout the hierarchy, high-ranking officials in military hospitals and the military police corps as well as government were aware that deaths on a massive scale were occurring," Pinheiro said.

"Thus we concluded there were 'reasonable grounds' - that is (the threshold) that we apply - to believe that the conduct described amounts to extermination as a crime against humanity."

Tens of thousands of detainees are held by the government at any one time, and thousands more have "disappeared" after arrest by state forces or gone missing after abduction by armed groups, the report said.

Through mass arrests and killing of civilians, including by starvation and denial of medical treatment, state forces have "engaged in the multiple commissions of crimes, amounting to a systematic and widespread attack against a civilian population".

There were reasonable grounds to believe that "high-ranking officers", including the heads of branches and directorates commanding the detention facilities and military police, as well as their civilian superiors, knew of the deaths and of bodies buried anonymously in mass graves.

They are thus "individually criminally liable", the investigators said, calling again for Syria to be referred to the prosecutor of the International Criminal Court (ICC), a decision that only the Security Council can take.

"It depends on the political will of states. Apparently for Syria now, there is none - there is total impunity, unfortunately," said panel member Carla del Ponte.

"We are still waiting for a green light for international justice," she said.

"The Security Council doesn't do anything and can't do anything because of the veto", she added, a reference to Russia, Assad's ally, which has repeatedly used its power as a permanent Council member to block resolutions against Damascus.

Over the past four years, the investigators have drawn up a confidential list of suspected war criminals and units from all sides which is kept in a U.N. safe in Geneva. Pinheiro said "we have included new names" but gave no details.

Del Ponte disclosed that the U.N. investigators have provided judicial assistance to various authorities in response to 15 requests for information on foreign fighters in Syria.

She declined to identify the countries involved, but later told Reuters: "These are low-level and middle-level perpetrators because they are foreign fighters, not high-ranking."

The Nusra Front, which is allied to al Qaeda, and Islamic State, which has proclaimed a "caliphate" in swathes of Syria and Iraq, have committed mass executions of captured government soldiers and subjected civilians to "illicit trials" by Sharia courts which ordered death sentences, the report said.

"Due to their exclusive control of large territories and its centralized command and control structure the so-called ISIS established detention facilities as far as we know are in Raqqa, Deir al-Zor and Aleppo. Serious violations were documented in these facilities, including torture and mass executions," Pinheiro said.

"Accountability for these and other crimes must form part of any political solution," the investigators said, five days after U.N.-sponsored peace talks were suspended without any result.

Raneem Matouq, daughter of prominent lawyer Khalil Matouq missing since Oct 2012, said she had been held for two months in 2014 at Military Security Damascus Branch 227 after being arrested for her own "peaceful activism" while a student.

Inmates at the detention facility, estimated to hold several thousand, have died as a result of torture, disease and appalling prison conditions, including chronic lack of food, according to the U.N. report.

"I was with 10 other girls in a room one-and-a-half metres long by two meters long. For guys it was a room the same scale but they had 30-40 men, with dead bodies," Matouq told Reuters on a visit to Geneva last week with Amnesty International.

"It was full of insects, we were sleeping on the floor, there was no toilet," she said. "We were allowed to go to the toilet three times a day, we called it 'the picnic' because we could walk outside.

"Sometimes we would find dead bodies inside the toilet (area). It was so horrible, they were all men."

1 / 30
Civil Defence members put out a fire that spread in an oil refinery in the town of Marat Numan in Idlib province, Syria March 10, 2016.&nbsp;
Khalil Ashawi / Reuters 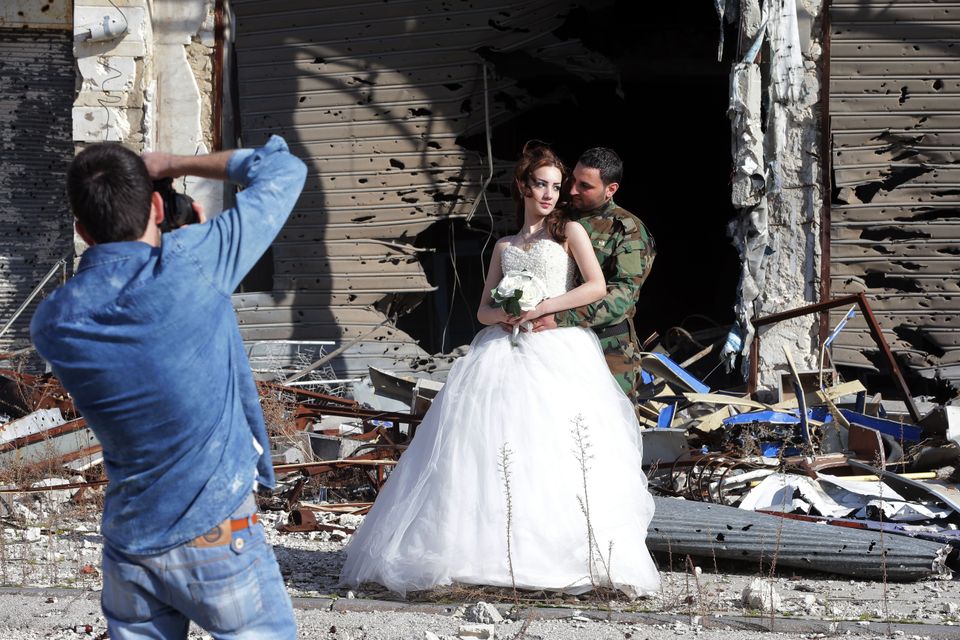