Americans are far less likely to support military action in Syria than they have been in the past 20 years to endorse other interventions, including the wars in Iraq and Afghanistan, a Gallup poll released Friday finds.

Asked whether they favored or opposed the United States taking military action against Syria in order to reduce that country's ability to use chemical weapons, just 36 percent said they favored doing so, while 51 percent were in opposition.

In comparison, a majority of the public supported action during the run-up to engagements in Iraq, Afghanistan and the Persian Gulf in 1991. Views on military intervention in Kosovo and the Balkans were about evenly split. In many of those cases, support rose once military action had started, according to Gallup, something known as a rally effect.

"Historically, Americans often rally around military actions once engagement begins, and should Congress authorize U.S. action in Syria, this may also heighten support for it -- if it occurs," Gallup's Andrew Dugan writes. "Currently, though, much of the nation would rather sit this one out." 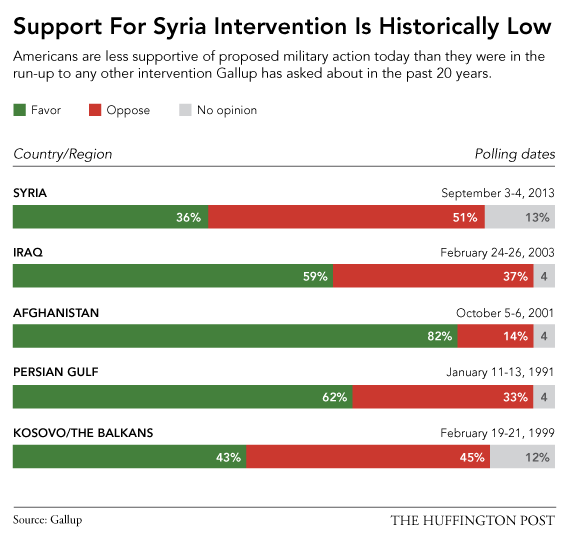 The public's attention to Syria's civil war has spiked sharply in past months. Seventy-one percent of Americans now say they're paying attention, up from 48 percent in June.

Nearly all recent surveys, have found high levels of opposition. In five of the latest polls, most asking specifically about airstrikes, support for intervention ranged from 25 percent to 42 percent, depending on the phrasing of the question. 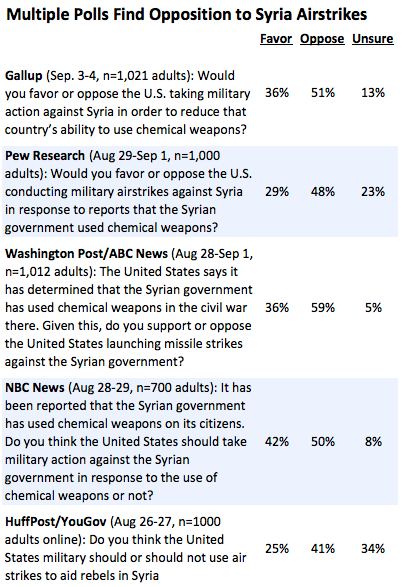 Results by party and ideology have varied widely, however, reflecting a number of factors: slight differences in phrasing, an ever-changing political situation, and Americans' mixed feelings about the possibility of military action more generally and the president who would lead it -- not to mention simply some random variation.

PHOTO GALLERY
Here's What Politicians Have Said About Syria

Syria Military Action Supported Less By Public Than Past Conflicts, Poll Shows
Here's What Politicians Have Said About Syria

1 / 9
Susan Rice
"All of this is horrific. All of us as human beings feel terrible when we see the extraordinary loss of life that [has] occurred in Syria," Rice said. "With chemical weapons, they can kill with indiscriminate abandon. People who are innocent are employed in conflict. It is of a greater magnitude because if terrorists get ahold of those weapons, if other dictators get ahold of those weapons, they can be used on a massive scale."
AP