The activist hacker group known as Anonymous appears to have vandalized the website of the Syrian Ministry of Defense. Visitors to the website early Monday morning were greeted with the green, white and black stripes and red stars of the Syrian flag. After a few moments, the Anonymous logo appears in the middle of the flag, above the following text in English and Arabic:

To the Syrian people: The world stands with you against the brutal regime of Bashar Al-Assad. Know that time and history are on your side - tyrants use violence because they have nothing else, and the more violent they are, the more fragile they become. We salute your determination to be non-violent in the face of the regime's brutality, and admire your willingness to pursue justice, not mere revenge. All tyrants will fall, and thanks to your bravery Bashar Al-Assad is next.

To the Syrian military: You are responsible for protecting the Syrian people, and anyone who orders you to kill women, children, and the elderly deserves to be tried for treason. No outside enemy could do as much damage to Syria as Bashar Al-Assad has done. Defend your country - rise up against the regime! - Anonymous

A member of Anonymous who was involved in the attack on the Ministry website told The Huffington Post Monday morning that the action was part of a broader effort by the loosely-affiliated group to focus on political targets.

"There are various things in the works - pretty much anything standing in the way of democratic governance, human rights, and the rule of law is in the crosshairs," the hacker said. "That includes everybody from the Koch brothers to Mahmoud Ahmedinejad."

He went on, "The [Ministry of Defense] was targeted because it represents the Syrian military, which is the key moving part in the ongoing uprising there. If the military turns against the regime, the regime is toast."

Anonymous had previously announced that they would begin targeting the websites of Syrian embassies around the world but today's attack was the first to target an official government website in the country, according to PC Magazine. Much of Anonymous's previous work has centered on large corporations, like Visa and Sony, but in June the organization announced it was joining forces with the politically oriented hacker group LulzSec, to focus more on government websites, reports the LA Times.

"There are absolutely plans to take other sites and do similarly targeted actions," the hacker said. "Any regime that's engaged in obviously heinous bullshit is fair game. Killing unarmed civilians absolutely qualifies as heinous bullshit.

The hacker group has recently attacked the websites of a number of high-profile institutions. Earlier in the weekend, the group announced it had stolen sensitive data from around 70 U.S. law enforcement agencies, primarily rural police departments.

The incident occurs as Syrian forces continue a series of brutal raids on protesters. The violent crackdown has left more than 1,700 dead.

In July, President Barack Obama condemned the Syrian regime, saying he is "appalled" by the "horrifying" reports of violence.

Scroll down for a screenshot of the hacked website. 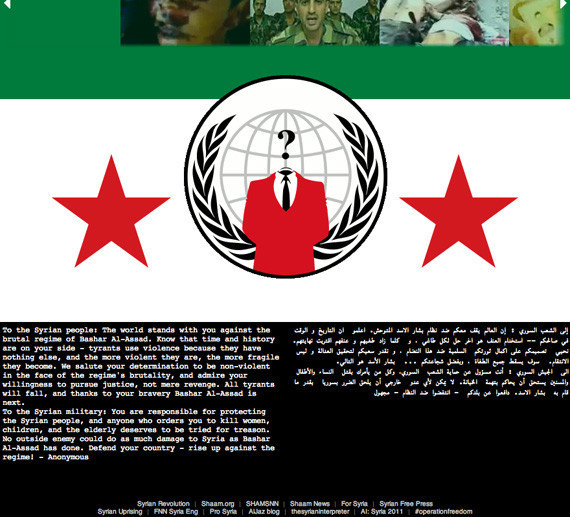