AKKAR VALLEY, Lebanon, Feb 29 (Reuters) - Inspecting his machinegun and wrapping ammunition belts around his chest, Samhar braces himself for another night's work.

The scrawny 26-year-old calls his secret route through the mountainous Syrian-Lebanese border "the path of death." But for nearby rebel-held areas in Syria, it is their only lifeline.

Samhar brings desperately needed supplies to neighbourhoods in the Syrian city of Homs, about 40 km (25 miles) from the border. They are encircled and under heavy bombardment by Syrian troops trying to snuff out the revolt against President Bashar al-Assad's rule. Activists smuggling in aid are also a target.

"We lose double the amount of people on these trips," he said.

He is from Homs but now works from a Lebanese border town nestled in a valley in northern Akkar region.

"We used to lose one person a month. But since the crackdown got worse last month we already lost seven."

Syrian forces have intensified their violent response to the 11-month-old uprising against four decades of Assad family rule, especially in Homs's rebellious district of Baba Amro.

Samhar has not seen his parents or siblings in months. He keeps a picture in his phone of a cousin he just found out was killed in Baba Amro last week.

Hundreds have been killed in a 25-day-old bombardment of Baba Amro, activists say, and more die due to the scarcity of medicine and blood transfusion bags.

Getting supplies in is complicated.

Lurking in the darkness that blankets the mountains around the town, Syrian forces across the border hunt for people like Samhar, who must negotiate landmines and checkpoints. Sometimes activists have even been hit by fire from their own comrades in the confusion of night operations.

"I've had friends die in front of me," he said. "We can't send the bodies to their families as it could put them in danger with security forces. So we bury them where we can."

Smuggling has long been a profitable business between Syria and Lebanon. In better days, the town, which the sources asked not be identified, was a fuel smuggling hub.

But even the high dividends of war profiteering is not enough to tempt professional smugglers to risk their lives. This is a business now left to activists like Samhar, who get advice from smugglers, but not much else.

"This is our path for jihad (holy war)," Samhar says, nervously twirling a cigarette around his long fingers as he waits to leave. "I'm not afraid of death, but being caught. No one wants to be tortured. Better to die quickly with dignity."

During the day, the town is filled with children kicking tattered soccer balls along unpaved roads and old men leading their cows home from pasture. Syrian refugees gather around mosques, getting bags of bread, clothes and old shoes.

But at night, the calm is shattered by gunfire as Syrian troops, smugglers and rebels play cat and mouse in the dark. Smugglers zip along on motorbikes. Only the glow of their cigarettes is visible as they rumble past, scoping the border.

Samhar visits Sheikh Mleihan, an old Lebanese man draped in a black cloak with a red and white kerchief on his head. He shoos away children and chickens gathering around his door and points to boxes of antibiotics, sterile needles, infant milk formula and blood bags stacked inside.

"In Homs, these blood bags are more valuable than anything else," says the old man, holding up plastic transfusion bags.

As night falls, Samhar and his friends gather at a sprawling house belonging to a professional smuggler, who asked to be called Mahmoud. He houses refugees in the front of the house.

But in a concrete back room, blankets are taped over the window. Outside, the twinkling lights of a Syrian village seem uneerily close.

Some local smugglers share their routes with groups of young Syrian activists. Mahmoud is a brawny young Lebanese man who eyes visitors with suspicion - he was arrested last year on arms smuggling charges which he insists are false. He won't say if he is paid to help Samhar's group of eight.

The men have packed blue suitcases with medicine and drop plastic bags filled with bullet belts on the floor. Activists say they sometimes start shooting to create diversions to distract Syrian troops from the people carrying supplies.

Samhar says he and his friends get their orders from the Free Syrian Army (FSA), the loosely organised group of army deserters and rebels who say their insurgency is to protect civilian protesters. His ties to the FSA make some suspect that weapons, as well as medicine, are being smuggled. Some activists privately acknowledged that they bring in weapons.

Many fear that loose talk will increase scrutiny by Lebanese security forces. Asked about weapons, Samhar avoids a straight answer. "I'll be brief. Whatever the FSA needs, I'm ready."

It is also unclear who pays for the supplies. Activists say locals and Syrian exiles donate money for them. Some say hardline Islamist groups funded from the Gulf are involved.

Khaled, an activist based in Beirut, blames arms smugglers for making it more dangerous to transfer medical supplies.

"Medicine smuggling has become so much harder in the past few months," he said. "They are ruining our chances."

Pacifists like Khaled sneak in smaller quantities, sometimes putting blood bags or pills under the hubcaps and bonnets of cars heading into Syria legally.

But Samhar's friend and guide, the smuggler Mahmoud, says other activists must accept that the rebels need weapons.

The young men jump on motorcycles to head down to the river that winds through green fields and thickets along the border. They will carry their heavy packs on foot the rest of the way.

"I am still dreaming of martyrdom," Samhar says, frowning. "Everytime I come back alive, I'm frustrated."

Asked about the impact of their casualties, Mahmoud shrugs. "There are so many young guys who want to do this. We have no problems finding recruits," he says, stubbing out his cigarette.

But as Samhar and his team leave, Mahmoud admits out of their earshot that he frets about his new friend.

"He's shared my room with me for two months. I sympathise with his cause, I understand he is eager. But every night I worry he's the one who won't come back." (Editing by Alistair Lyon) 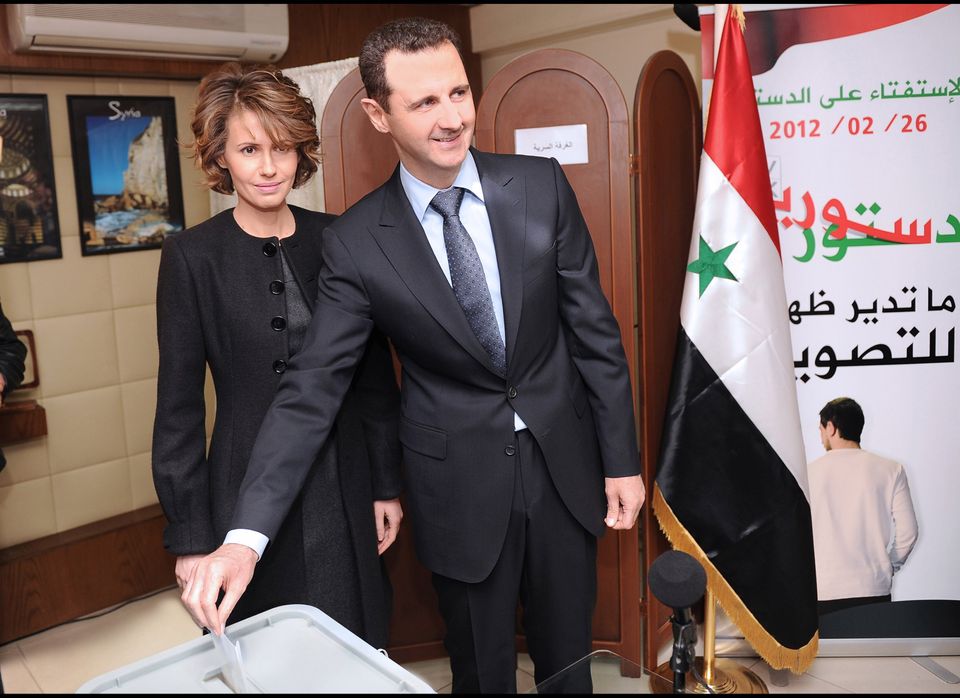 1 / 54
In this photo released by the Syrian official news agency SANA, Syrian President Bashar Assad casts his ballot next to his wife Asma at a polling station during a referendum on the new constitution, in Damascus, Syria, on Sunday Feb. 26, 2012. Syrians began voting on a new draft constitution aimed at quelling the country's uprising by ending the ruling Baath Party's five-decade domination of power, but the opposition announced a boycott and clashes were reported across the country. (AP Photo/SANA)
AP