WASHINGTON -- The American public's opposition to intervening in Syria has grown rapidly in volume and intensity, new polling finds, with many unpersuaded by President Barack Obama's argument and convinced the U.S. has no good options. 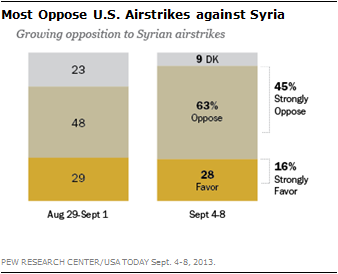 Obama, who will make a primetime speech on Tuesday calling for action, faces an increasingly uphill battle to win popular support. Only 35 percent think he's made a clear case for launching airstrikes, virtually unchanged from last week.

While Americans seem largely resolved against military action, they remain deeply conflicted on many of the issues at play in the Syrian conflict. Many see a need to take some kind of action: 54 percent said the U.S. had a moral obligation to stop the violence against civilians, and 60 percent said the U.S. must act to show that the use of chemical weapons is unacceptable. But they are unconvinced that American intervention could bring an end to the violence. Most said the situation wasn't a threat to the security or credibility of the U.S., and a full 75 percent -- including a majority of those who favored airstrikes -- thought those strikes were likely to make things worse.

A Gallup poll also released Monday found that while supporters of airstrikes saw a need to respond to the use of chemical weapons, the majority who opposed action largely thought that the conflict in Syria was not America's business and that intervention would only worsen the situation.

"These survey results suggest [President Obama] needs to address Americans' concerns that the conflict is not the nation's business at this time, that the U.S. cannot afford to get involved in another war right now, and that the proposed military scenario has not been well thought through and planned," Frank Newport, Gallup's editor-in-chief, wrote in a summary of the poll results. "Americans' skepticism does not appear to arise so much from a lack of awareness that the Syrians may have used chemical weapons -- although a small percentage say they don't believe the U.S. has enough information on that front. Instead, their opposition is based more on the idea that the U.S. should not expend money and resources to intervene, regardless of what the situation is in Syria."

The conflict has also taken a toll on Obama's approval rating as it relates to international affairs. In the Pew Research/USA Today survey, just 33 percent said they approved of how he was handling foreign policy, down from 46 percent at the beginning of last year and among the lowest marks he's received in any public poll tracked by HuffPost to date.

That disapproval of the president's efforts may play into Americans' preference for congressional involvement. Respondents to the Pew Research/USA Today survey were twice as likely to say Congress should have the final authority over taking military action as they were to say Obama should.

A CNN/ORC poll released Monday found little support for airstrikes, and even less if they're undertaken without congressional support. Just 39 percent said Congress should pass a resolution that "authorizes military action for 60 to 90 days" and "bars the use of U.S. troops in a combat role in Syria." If that resolution passes, the poll found, 43 percent would support the strikes; if it does not, support drops to 27 percent.

A majority, however, said their own votes in November 2014 were not at stake. Fifty-seven percent said that how their representative in Congress voted would not affect whether they would support that person in the next election. Another 31 percent said they'd be more likely to vote for a lawmaker who opposed using military force in Syria, while 11 percent would be more likely to vote for someone who supported it.

While public polling to date has nearly uniformly found opposition to conducting airstrikes, the partisan dimensions of the conflict are less clear.

The CNN/ORC poll, which stressed the limited nature of the conflict, found somewhat less opposition among partisans of all stripes, but especially Democrats. In that survey, 56 percent of Democrats thought Congress should pass a resolution authorizing airstrikes, and 51 percent favored strikes if that resolution was passed.

In a Washington Post/ABC poll, 64 percent of Americans opposed launching missile strikes against the Syrian government, up from 59 percent last week. The change was starkest for Republicans, among whom opposition jumped from 55 percent to 71 percent.

In an AP-GfK poll, 61 percent said Congress should vote against authorizing "a U.S. military strike in Syria in response to a chemical weapons attack there on August 21." Only 20 percent said a strike would be extremely or very likely to deter other leaders from using chemical weapons, while more than half said a military strike would likely lead to a longer-term commitment of forces. Just 11 percent would support a long-term commitment in Syria. A majority disapproved of Obama's handling of the situation.

PHOTO GALLERY
Here's What Politicians Have Said About Syria

1 / 9
Susan Rice
"All of this is horrific. All of us as human beings feel terrible when we see the extraordinary loss of life that [has] occurred in Syria," Rice said. "With chemical weapons, they can kill with indiscriminate abandon. People who are innocent are employed in conflict. It is of a greater magnitude because if terrorists get ahold of those weapons, if other dictators get ahold of those weapons, they can be used on a massive scale."
AP