BEIRUT -- Late in the night on Feb. 2, the news hit: "all communication and supply line[s]" between Turkey and Aleppo had been severed, according to a Elijah Magnier, a renowned Arab war correspondent with Alrai Media Group. It seems to be so: the Syrian army and allied militias, backed by Hezbollah and Russian air power, took control of a tendril of territory that cuts off Aleppo-based rebels from the Turkish border. See the map below. Eastern supply lines for the so-called Islamic State appear to have also been cut. Of particular strategic importance is the village of Murassat Khan and adjacent towns north of Aleppo: by taking control of the area, Damascus ended the main Turkey-Aleppo insurgent supply line. The tourniquet around Aleppo can be pulled off the city -- and at the same time, one of the main ISIS oil corridors to Turkey is cut. If things proceed as they have been, with the regime advancing further into rebel-held territory, the red swathe of Syrian government forces will shortly expand to encircle all opposition forces (predominantly Jabhat al-Nusra and ISIS), who themselves have been encircling Aleppo in the east. 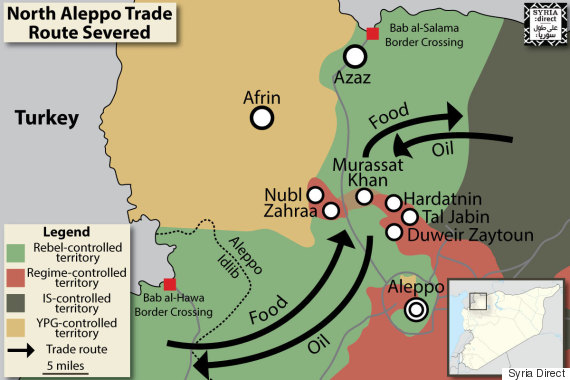 Map courtesy of Syria Direct.
Edward Dark, a pseudonym for a respected commentator on Syrian affairs living in Aleppo,
tweeted
on Feb. 3, "This is the beginning of the end of jihadi presence in Aleppo. After 4 years of war & terror, people can finally see the end in sight." But if we were to step back and take a look at more of Syria, as shown in the (slightly older) map below, a bigger picture emerges.

Take a close look at the map below. The yellow area purports to represent territory controlled by Syrian Kurds. In reality, "control" is not an appropriate word. But the territory in yellow nevertheless can be said to be friendly to the Syrian army. The People's Protection Units (a group of mostly Kurdish militias known by the acronym YPG) are being given Russian air support (and sometimes American air support as well). The Afrin canton (the yellow area in Syria's northwest corner) is the area through which the U.S. Central Intelligence Agency supply line to rebel coalitions, along the Mount Turkmen heights, reportedly used to run. The Latakia region is now in the process of being sealed. If government forces, moving north, can make friendly contact with the Kurds in the northeast, almost all Nusra and allied rebel forces would be nearly surrounded. The insurgents would be caught in a cauldron with their backs to a lightly populated and forested territory.

Map courtesy of Al-Masdar / The Arab Source.
The grey, ISIS-controlled corridor, especially the Jarablus border crossing with Turkey,
remains effectively open
. Turkey has
proclaimed
this represents its "red line." Were this corridor to be closed by the Syrian Kurds, the Turks have indicated they could respond by invading Syria. The YPG
say
nonetheless, that they are contemplating just such a move. In the last few days, the spokesman for the Russian defense ministry
warned
that Russia has seen clear evidence of Turkish preparations for a military invasion of Syria. It seems likely that this statement is intended by Russia as a warning to Turkey to do no such thing.

Meanwhile, Russian Foreign Minister Sergey Lavrov made it absolutely clear (to Turkey and to everyone else) that Russia intends to close the border area between ISIS-held territory and Turkey: "The key point for the ceasefire to work is a task of blocking illegal trafficking across the Turkish-Syrian border, which supports the militants," he said. "Without closing the border it is difficult to expect the ceasefire to take place." Russia is politely telling Turkey that any incursion risks direct confrontation and war. Recently, for whatever reason, ISIS forces have appeared to start pulling out of that area. 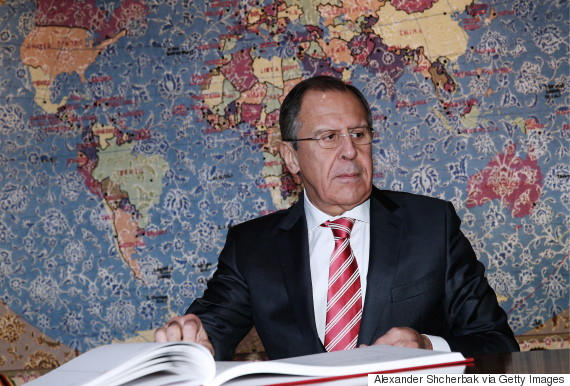 Lavrov in Oman on Feb. 3. (Alexander Shcherbak\TASS via Getty Images)

With Turkish President Recep Tayyip Erdoğan being the irascible character that he is, it is possible that we may yet see surprises, like a Turkish incursion into northern Syria aimed -- ostensibly -- at preventing the Syrian Kurds from linking up along the southern side of the Turkish border. But, if Turkey were to take such independent action, it would likely forfeit any NATO support beyond rhetoric, and any Turkish expeditionary force would have to be launched in the face of Russia's complete air superiority in Syria, which extends right up to the Turkish border.

To discourage Turkey from taking such a rash undertaking, however, Russia reportedly deployed several of its latest advanced fighter jets to Syria (which easily outclass Turkish F-16s) and also repaired and upgraded the Syrian air force's line up.

To put it baldly then, as things stand, Syria seems to be heading not towards a "quagmire" as many western politicians have suggested, but rather to a clear military outcome. As one knowledgable commentator noted, the negotiating table is not in Geneva. The true negotiations are taking place on the battlefields of Idlib and Aleppo -- and what has just been negotiated is the near encirclement of rebel forces into a cauldron. Nor, it seems, is Syria heading toward a low-intensity guerrilla war in the aftermath of any military victory on the ground. The scenes below, showing people's jubilation when the Syrian Army and Hezbollah forces entered villages that had been retaken from rebel forces this week, tell a different story:

Put simply, should Nusra members (who are mainly Syrian) and other rebels try to disperse and hide amongst local communities, there will be no water in which these fish can swim, to paraphrase the Maoist adage. They will find little or no public support. Syria has a very effective intelligence service. We may expect that within a year, most of the disbanded jihadists will have been found out and reported to the intelligence services by locals, who suffered grievously under their occupation. Most will be arrested or killed. Peoples who undergo the kind of trauma to which Syrians have been subjected either emerge as a psychologically defeated nation or they are strengthened by the crisis through which they have passed. I am quite sure from my visits to Syria through this crisis that its people will emerge stronger. Steel has entered into the Syrian soul.

I also expect Syria to soon again constitute a strong regional state. The meaning of this will be evidenced in a powerful, cohesive northern arc through the region -- and perhaps closer relations with Iraq. Correspondingly, certain Gulf states will find themselves eclipsed. 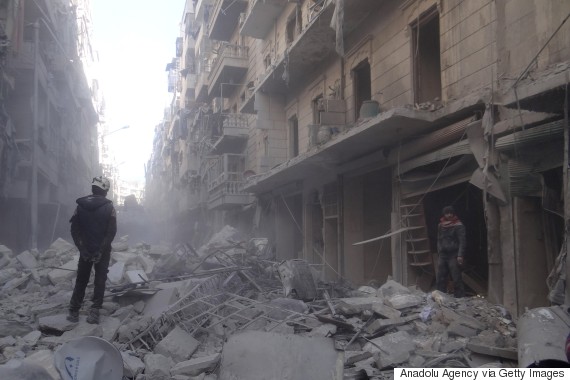 A civil defense team member stands on the debris of a building after a suspected Russian airstrike in Aleppo, Syria on Feb. 5, 2016. (Firas Taki/Anadolu Agency/Getty Images)
American and many European elites will find this outcome hard to swallow. Western diplomats and military officers have become more used to quagmires that lead to no political outcomes, or to fudges that lead to stasis, rather than interventions that have a real conclusion. That this should have been achieved with direct help from Russia, Iran and Hezbollah will be a bitter pill to swallow. It will have consequences too.
One is already apparent. The Obama administration
announced
this week it would ask Congress to quadruple its security assistance to Europe. Polarization seems to be on the cards. The 4+1 coalition (Syria, Iraq, Iran, Russia and Hezbollah) is likely to become the core to a real security architecture for parts of the Middle East -- and probably Central Asia too. China will increasingly be drawn into this new architecture as well, since it fears that its "One Belt, One Road" project, on which its economic future largely is staked, is as vulnerable to Wahhabism as was Syria and Iraq. Chinese officials, I've been told, are aware that America could again use the Wahhabist tool to frustrate their new project.
The question is, will the bitterness at Syria, Russia and Iran's achievement poison America and Europe's attitude towards the new security architecture being forged in Syria? Will it be seen as anti-Western (which it is not), or will Europe manage to curb the Pavlovian NATO impulses sufficiently to establish some modus vivendi? The auguries are not promising.