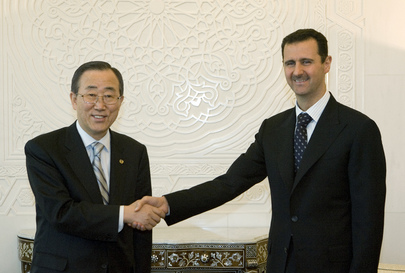 Will Washington strike Syria to save face, distract from U.S. domestic politics, or to substantively alter the balance of the conflict? President Obama had vowed that the U.S. would act if the Assad Regime employed chemical weapons. The "red line" has been crossed, and the Obama Administration has been criticized at home and abroad for making empty threats that it did not have the political will to carry through. As far as Syria is concerned, the Obama Administration has been projected as not leading and with Egypt it is viewed as indecisive. The current situation and political options before Washington and its allies once again remind of events in Bosnia and Herzegovina (BiH) and the former Yugoslavia region two decades earlier. Another critical question is will Washington act via NATO and allies as Turkey and the UK? It is evident that no United Nations consensus or specific authorization is forthcoming, but there will be a UN debate.

Air Strikes more to Save Face than Save Lives?

Starting in 1993, a year after the conflict started in BiH, the UN and NATO established "safe areas" and "protected zones." However, despite the ongoing siege and attacks upon civilians in these urban areas as Sarajevo, Tuzla, Bihac, as well as Srebrenica, the UN and NATO only responded for merely optical, symbolic pinprick fashion, or found an excuse not to respond at all (including blaming victims and the defenders of BiH.) The UN peacekeepers on the ground increasingly became targets of the Serbian forces and ultimately proved to be more hostages, another excuse for inaction. In the end, the conflict only spiraled further out of control of not only the BiH Government, but also the UN and NATO allies including Washington. A similar trend appears now in Syria.

Despite the recent upbeat in the war drum from the Obama Administration, the likelihood of military action by the U.S. against the Assad Regime may not be imminent, or at least immediate. In fact, the wave of leaks from the Administration may be more about setting up a diplomatic showdown at the UN with Moscow and Beijing. The UK is introducing a UN Security Council Resolution that would apparently authorize military measures to protect Syria's civilian population, presumably under "R2P" or Responsibility to Protect principle, (that again evolved in post-Bosnia evaluations after inaction and failures.) This debate is likely to grind on, as Moscow and Beijing will threaten veto, and the UNSC is at least likely to await the Report from the UN Chemical Weapons Investigation team that is now presumably gathering evidence on the ground in Syria.

Nonetheless, the pretext for any attack upon the Syrian Regime is important. While much/most of U.S. public may only be inclined to engage in Syria as a punitive measure, the citizens of that region would want to see action that takes into consideration their interests and perhaps helps advance an end to the conflict. There is also the risk that any military action by Washington could be defined as motivated by Israel's interests, which would immediately undermine the U.S. and Allies' input to help fashion a more favorable future government and geopolitical orientation for Syria. Syria does border on a NATO ally, Turkey, and they, along with other regional powers, are predisposed to U.S. leadership in this instance, but also need to be consulted about both the immediate action and what to do after the bombs and missiles have been fired. They will bear the consequences of both action and inaction. Nonetheless, it is probably a positive that late but finally the debate regarding Syria is again taking center stage prompted by the threat of intervention, even if at the UN or even within the Allies and U.S. there are conflicting perspectives and agendas.

Senator John McCain has been the most vocal in asserting a more constructive role for U.S. in removing the Assad Regime and being at least an influence in helping shape the future Syria. In the early 1990s Senator McCain had assumed an isolationist role in the conflict in BiH, arguing that the U.S. had "no dog in the fight" in a CNN "Crossfire" that he and I engaged. However, since then Senator McCain has come to see a more engaging role for the U.S. in Bosnia, after the failures of inaction and the consequences of a Dayton agreement crafted along the lines drawn by war criminals and the consequences of their deeds.

The U.S. and European allies were also conflicted in confronting Slobodan Milosevic and General Ratko Mladic's orchestrated genocide and aggression with BiH. The result of inaction was more than greater human suffering and deprivation. Some U.S. allies silently awaited BiH's death, seeing this as the most expedient solution. The conflict was not only prolonged but other more extreme agendas began to exploit the apparent chaos and betrayal of BiH and the multi-ethnic society that it represented. The consequences continued to reverberate through the Dayton talks and subsequent implementation of a "peace agreement" that should have returned BiH to normalcy, but in effect has made it a step-child of the Euro-Atlantic family.

Excuses had been offered by Washington and its European allies that both air action and airdrops for humanitarian reasons in BiH would have been endangered by Belgrade's purportedly advanced air defense system (as in Syria largely developed via Moscow.) However, when the U.S. and NATO finally did act, the air defense system was neutralized and there were no NATO casualties. Recent Israeli air strikes within Syria also evidence gaps in the Syrian Regime's air defense, and cruise missiles and drones are also at U.S./NATO's disposal. In conversations with then NATO Secretary General Willy Claes as well as other U.S. and European officials, it was clear that from the outset it was never the military capability as much as the political will and what kind of result the allies wanted to see in BiH. In the end, face-saving measures proved only to erode both the quality of peace and the credibility of Washington, Europe and NATO.

Inaction has Favored Extremists & Eroded Options to Ever Less Appealing?

Some speculate that President Obama's intention to strike at Syria is primarily motivated by domestic politics, not only the need to deflect an image of weakness but also to undermine Republican efforts in Congress during an upcoming budget-debt ceiling debate. UK Prime Minister Cameron has offered that the Allied response should be measured, thus implying only symbolic rather than game changing in terms of the broader Syrian civil war. From Washington to the key European capitals, "regime change" is specifically ruled out. Perhaps this is feigning or a means to reassure Assad's backers in Moscow, Beijing, and Tehran. Regardless, it is my experience that any intervention, even if limited or "measured" has to calculate the possibilities beyond the initial strike -- from counterstrikes and further escalation by Assad forces, to the diplomatic response of adversaries and hesitant allies. (The Arab League under the capable leadership of Nabil el-Araby has condemned Assad's chemical attacks and long has sought more resolute action to confront his regime.) It is not the chemical weapons that are the problem but the Assad Regime that has purportedly opted to use them against its own people. The crucial line has been crossed, but there is no way to predict where the Assad Regime or, for that matter, its armed opposition will stop. Inaction has sent a chilling message: brutality is tolerated and will return dividends on the battlefield as a consequence of failures to confront or in the least refer the Syria crimes to the International Criminal Court. It is no coincidence that the Assad Regime has turned the tide of battle with its allies while the opposition appears ever more dominated by extremists.