ISTANBUL -- One great casualty of the Syrian crisis has been the fragile peace between Turks and Kurds. Turkey's downing of a Russian military jet will help little in improving this much strained relationship. But it can clarify the basic political tensions which Turkey's Turkish and Kurdish politicians need to come to terms with, and get over, if they want to forge a new mode of coexistence inside Turkey's borders. The challenge here is to manage to live in peace inside Turkey, whilst supporting forces with diametrically opposing agendas in Syria, which requires a shift in thinking.

The downing of the Russian jet showed Turkey's determination to support northern Syria's Turkmen tribes who had been living in the region for the last millennia. Today there are around 100,000 Turkmen living in Syria; some among them spent the last year struggling to oust Syria's President Bashar Al-Assad. Turkmen openly admit receiving support from the Turkish government, which seems determined to stand by them by all means necessary.

Kurds have a different agenda in Syria. The Democratic Union Party, PYD, the Syrian affiliate of the militant Kurdistan Workers Party, PKK, has been pursuing its own interests in the region during the last decade. Founded in 2003, the PYD is currently governing three Syrian cantons (Kobani, Afrin and Jazira) and has repeatedly accused Turkey of not supporting its fight against the self-proclaimed Islamic State. This is in line with Vladimir Putin's accusations of a Turkey-ISIS affinity. All this leave little chance for the PYD or Russia to be okay with Turkey's support for Turkmen anytime soon.

The challenge is to manage to live in peace inside Turkey, whilst supporting forces with diametrically opposing agendas in Syria, which requires a shift in thinking.

These elementary facts -- strong Turkish support for Turkmen tribes and strong Kurdish support for the PYD -- have affected, even defined, Turkish-Kurdish relations in Turkey in the past year. Rarely before had relations between two people been determined this strongly by regional events. This may seem inevitable given the passionate fighting of Turkmen tribes against Assad's forces and Kurdish fighters against ISIS. Although inevitable, these conflicts proved poisonous for Turkey's domestic politics. Playing such a crucial role in the nationalist narratives of Turks and Kurds, they complicated the already difficult task of building peace inside Turkey's borders.

Watching the opening ceremony of Turkey's Grand Assembly on TV exactly a week before the downing of the Russian jet, I was reminded of the gravity of the problem. I watched Leyla Zana, the pro-Kurdish Ağrı deputy of the Peoples' Democratic Party, HDP, as she took to the podium and prepared to read the parliamentary oath. Like many I was surprised to see her turn towards Turkey's President Erdoğan, who attended the ceremony. Zana addressed the president in Kurdish. "Bi Hevîya Aşîtî Kî Bi Rûmet Û Mayînde," ("Hoping for an honorable and sustainable peace") she said. Zana was then expected to recite the following:

I swear upon my honor and integrity, before the great Turkish nation, to safeguard the existence and independence of the state, the indivisible integrity of the country and the nation, and the absolute sovereignty of the nation; to remain loyal to the supremacy of law, to the democratic and secular republic, and to Atatürk's principles and reforms; not to deviate from the ideal according to which everyone is entitled to enjoy human rights and fundamental freedoms under the notion of peace and prosperity in society, national solidarity and justice, and loyalty to the Constitution.

This oath, drafted by generals after they took power through a military coup on September 12, 1980, is problematic for several reasons. The oath is problematic grammatically: it is too long, too elaborate and filled with too many conjunctions. This the majority of Turkey's parliamentarians accept. For Zana, the oath is problematic for an additional reason: it represents the xenophobic brand of the nationalistic ideology supported by coup generals, which, some argue, lies at the heart of the Turkish-Kurdish conflict inside Turkey.

As Zana started reciting the oath, one could see she was standing beneath this historical-ideological baggage. She refrained from using the phrase "the great Turkish nation" and instead swore before "the great Turkey nation," leading to chaos inside the Grand Assembly. 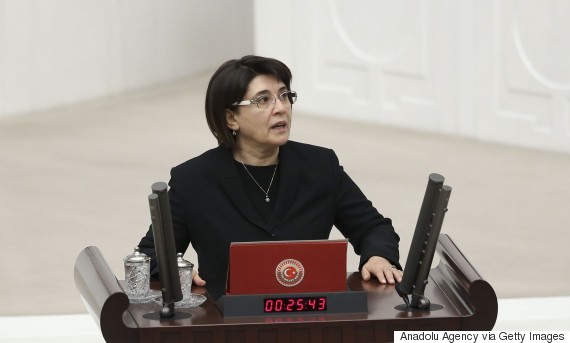 Male politicians here have a long history of talking down to female politicians in Turkey's Grand Assembly. They have often picked on headscarved women (in 1999, Merve Kavakçı had been thrown out of the Parliament after daring to attend the oath ceremony wearing a headscarf), Kurdish women and feminists. In 1991, when speaking Kurdish in public spaces was strictly banned in Turkey, Zana was elected MP and while taking the oath, added to it a Kurdish phrase which meant "I take this oath for the brotherhood between the Turkish people and the Kurdish people."

Zana was 30 years old at the time. As soon as she uttered the Kurdish phrase, the parliamentary speaker started referring to her condescendingly as kızım ("my girl") and ordered Zana to "take her words back." The YouTube video of the event shows Zana being forced to say "I take my words back" in front of cameras, like an unruly schoolgirl. The next day mainstream Turkish media attacked her perceived crime. Not long after the event, Zana's party was banned, her parliamentary immunity was stripped. She was arrested, charged with treason and, in 1994, sentenced to 14 years in prison.

I remember that June day in 2004 when Zana was released from prison. I was having dinner with Dutch friends at a restaurant that served traditional Ottoman food in Taksim. Suddenly the service came to a halt; the waiters, hearing of the news, had started celebrating, singing songs and bringing free beverages to tables. By then Zana had become a symbol for Kurds; the European parliament had awarded her the Sakharov Prize. The year following her release, the European Court of Human Rights ruled that Turkey had violated Zana's rights of free expression.

Watching her get into trouble a decade after this decision is not exactly great news. It seems like in the last quarter of a century, speakers of Turkey's Parliament have changed while the oath problem remained the same.

Strong Turkish support for Turkmen tribes and strong Kurdish support for the PYD have affected, even defined, Turkish-Kurdish relations in Turkey in the past year.

But one could see prospects for change as parliamentarians started reacting to the oath crisis last Wednesday. The parliamentary speaker admitted that the oath was deficient and had to change. There were calls in different sides of the Grand Assembly to change its wording. Some wanted to use the original oath, written in 1924, in the immediate aftermath of Turkey's republican revolution when the ethnic conflict between Turks and Kurds had not yet started, since both people fought under the same flag against the Allied powers. The oath in the original constitution is as follows:

I swear to have no agenda that runs against the happiness or the security of this country, nation and the sovereignty of the people and to never lose my faith in the foundations of the Republic.

Another alternative was to draft a shorter oath:

I swear, on my holy beliefs and my honor, to remain true to human rights, to the rule of law and to democracy, and to protect the unconditional sovereignty of the nation.

"I will not take the oath again," Zana reportedly told journalists after the oath crisis. "Some things need to change." Left-wing figures from the Republican People's Party, numerous HDP parliamentarians and powerful figures from the conservative AKP seem to agree with her, unlike MPs who booed Zana during her ordeal in 1991. This year's oath debate, which is part of the bigger debate for writing a new civilian constitution, can redefine Turkish-Kurdish relations and potentially overshadow events going on in Syria -- if Turkey's politicians are indeed willing to conceive a new era where domestic politics will take precedence over foreign policy considerations.