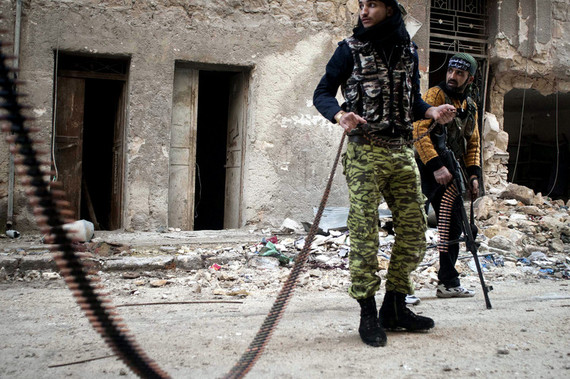 President Obama and other Western leaders are critical of President Putin's support of Syrian President Assad. The West is upset about Russia's use of missiles and aircraft to attack anti-Assad rebels in Syria. While there is no debate about the value of Russian attacks on ISIS; there is a deep concern over his support of Assad and the long-term consequence for the middle east of the effect of Russia, Iran and Iraq working together.

Putin on the other hand has complained of the lack of co-operation by the United States with the Russian military plan in Syria. Putin described this failure as a result of the West having "mush for brains". To understand Putin's support of the Assad regime, one has to understand when Putin sees Syria he sees many of the same issues he has been dealing with in Chechnya. For Putin Syria is Chechnya. Chechnya has gone through wars with Russia and is now firmly aligned with Moscow.

Syria is too reminiscent of Chechnya for Putin. In both conflicts, the State fought rebels who had ISIS type terrorist actions (blowing up theatre in Moscow). Kadyrov has rebuilt Grozny (with significant financing from Moscow) and created his own version of the peaceful Islamist Republic of Chechnya. The last two years, Putin hoped that Assad would be able to do what he himself did in Chechnya.

After two decades of Sunni separatist fighting, Chechnya is now headed by Ramzan Kadyrov, a former rebel who switched to pro-Russia side. Putin established a stable government in Chechnya and is able to sustain it regardless of numerous factors that make this region of Russia by far one of the most volatile in the world.

This is true despite Chechnya's population being primarily Sunni followers of Islam. There have been many reports of ISIS in Iraqi freeing Sunni's and executing Shiites. To Sunni ISIS fighters, Shiites are apostates and must die. The one result of the Syria war Putin cannot allow to have happen, is the Sunni ISIS fighters spreading to Chechnya. Currently Chechnya is a part of Russia. As a part of a republic, Chechnya is obliged to follow the Federal law of Russian Federation. But Putin has allowed exceptions to federal law in an attempt to promote peace in Chechnya. For example is monogamy. In keeping with Islam, it is legal to have multiple wives. This "flexibility" is just one example of Putin's flexibility in his control of Chechnya. Of course Chechnya is still very far from being a self-sustained and balanced country. Russian subsidies of Chechnya's economy could be considered astronomical; but if one compares it to the "price" of war Russia would have to pay otherwise, they make perfect sense.

Vladimir Putin believes that if Assad is permitted to be overthrown and ISIS survives the Middle East will be more of a mess than it is today. While the West is seeking a "transition" to a democratic government and rejecting Assad, it's "track- record" of nation building in the Middle East is dismal. Iraq, Afghanistan and Libya, clearly, are not a desirable model for a future Syria. Putin fears of what maybhappen in the Middle East if Syria is left without Assad's strong leadership and no clear understanding of who will replace him. The current situation reminds him of what has been happening in Chechnya years before his leadership, and how successful he views his strong military response and control of Chechnya.

However unsuccessful Assad has been in fighting ISIS, Putin has a point asking the West some basic questions: who will be responsible for Syria after the removal of Assad? Who will contain Sunni extremists? Who will help Russia if ISIS extremists return home to cause terror in the North Caucasus and other Russian regions with significant Sunni Islamic population? And finally, who will guarantee the safety of chemical weapons in Syria?

Bottom line - Putin has done something close to impossible by "taming" the Chechen nation, and keeping them peaceful for more than a decade. Perhaps it makes sense to listen to his position on Syria.