The investigators urged the U.N. Security Council to "act urgently to ensure accountability" for violations, including murder and torture, committed by both sides in a conflict that has killed an estimated 70,000 people since a revolt against President Bashar al-Assad began in March, 2011.

"Now really it's time...We have a permanent court, the International Criminal Court, who would be ready to take this case," Carla del Ponte, a former ICC chief prosecutor who joined the U.N. team in September, told a news briefing in Geneva.

The inquiry, led by Brazilian Paulo Pinheiro, is tracing the chain of command to establish criminal responsibility.

"Of course we were able to identify high-level perpetrators," del Ponte said, adding that these were people "in command responsibility...deciding, organising, planning and aiding and abetting the commission of crimes".

She said it was urgent for the Hague-based war crimes tribunal to take up cases of very high officials, but did not identify them, in line with the inquiry's practice.

Del Ponte, who brought former Yugoslav President Slobodan Milosevic to the ICC on war crimes charges, said the ICC prosecutor would need to deepen the investigation on Syria before an indictment could be prepared.

Karen Koning AbuZayd, an American member of the U.N. team, told Reuters it had information pointing to "people who have given instructions and are responsible for government policy, people who are in the leadership of the military, for example".

The inquiry's third list of suspects, building on lists drawn up in the past year, remains secret. It will be entrusted to U.N. High Commissioner for Human Rights, Navi Pillay, upon expiry of its mandate at the end of March, the report said.

Pinheiro said the investigators would not speak publicly about "numbers, names or levels" of suspects, adding that it was vital to pursue accountability for international crimes "to counter the pervasive sense of impunity" in Syria.

The investigators' latest report, covering the six months to mid-January, was based on 445 interviews conducted abroad with victims and witnesses, as they have not been allowed into Syria.

"The ICC is the appropriate institution for the fight against impunity in Syria. As an established, broadly supported structure, it could immediately initiate investigations against authors of serious crimes in Syria," the 131-page report said.

Pillay, a former ICC judge, said on Saturday Assad should be probed for war crimes, and called for outside action on Syria, including possible military intervention.

"In some incidents, such as in the assault on Harak, indiscriminate shelling was followed by ground operations during which government forces perpetrated mass killing," it said, referring to a town in the southern province of Deraa where residents told them that 500 civilians were killed in August.

"Government forces and affiliated militias have committed extra-judicial executions, breaching international human rights law. This conduct also constitutes the war crime of murder. Where murder was committed as part of a widespread or systematic attack against a civilian population, with knowledge of that attack, it is a crime against humanity," the U.N. report said.

Those forces have targeted bakery queues and funeral processions to spread "terror among the civilian population".

"Syrian armed forces have implemented a strategy that uses shelling and sniper fire to kill, maim, wound and terrorise the civilian inhabitants of areas that have fallen under anti-government armed group control," the report said.

Government forces had used cluster bombs, it said, but it found no credible evidence of either side using chemical arms.

"They continue to endanger the civilian population by positioning military objectives inside civilian areas" and rebel snipers had caused "considerable civilian casualties", it said.

"The violations and abuses committed by anti-government armed groups did not, however, reach the intensity and scale of those committed by government forces and affiliated militia."

Foreign fighters, many of them from Libya, Tunisia, Saudi Arabia, Lebanon, Iraq and Egypt, have radicalised the rebels and helped detonate deadly improvised explosive devices, it said. (Reporting by Stephanie Nebehay; Editing by Alistair Lyon) 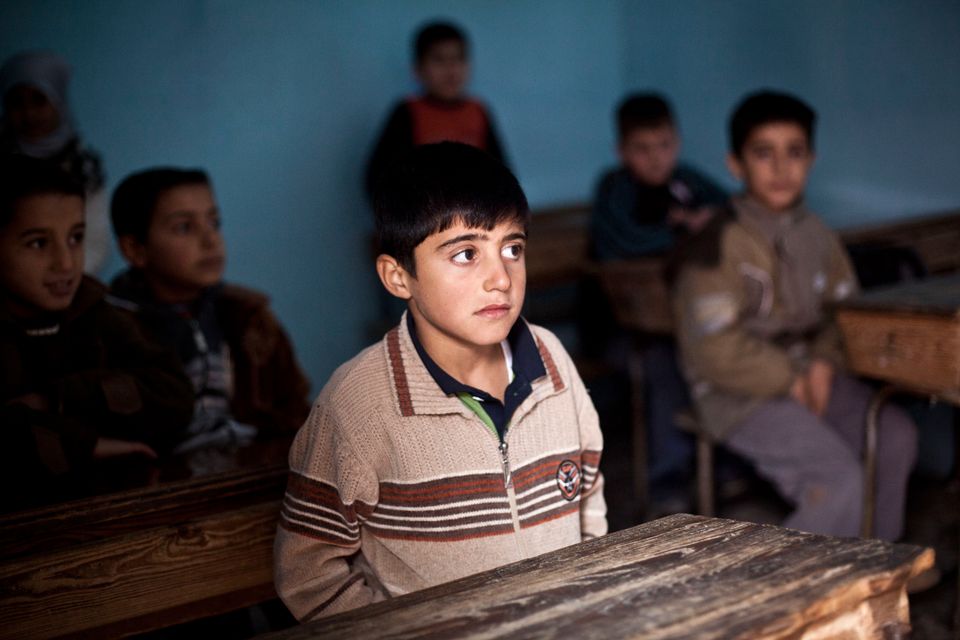 1 / 10
In this Monday, Dec. 17, 2012 photo, a Syrian boy attends class in a village near Aleppo, Syria. School has restarted in some mosques or improvised rooms of villages around Aleppo.(AP Photo/Virginie Nguyen Hoang)
AP