By Charlotte Partow, Harvard Class of 2019 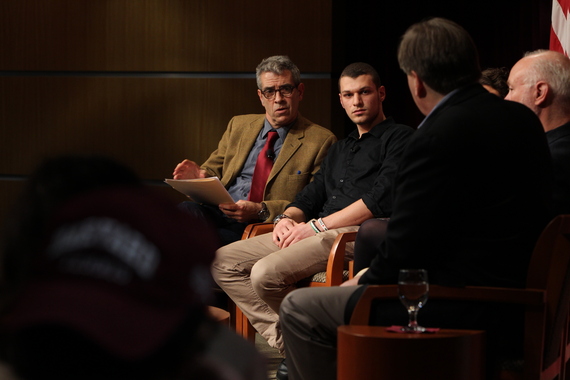 When I looked into the kind eyes of Fouad Faris, who at the age of 19 sought refuge from the Syrian Civil War here in Massachusetts in 2012, I looked into a mirror with a disquieting reflection. There before me were all of the realities that so easily could have been mine. In 1891, 1940, and 1979, I could have been Fouad: my Jewish family sought refuge from the Pogroms in Russia, Vichy collaboration with Hitler in France during the Holocaust, and the Iranian Revolution here in the United States. Instead, I am a Harvard student. Besides time and place, what is really different between me and Fouad? What makes me more fit to be an American? And why have we lost faith in Syrian refugees' good will?

Before the John F. Kennedy Jr. Forum titled, Taking Action on the Syrian Refugee Crisis, Faris, a panelist, explained that, "there's two things that are really wrong... why are you saying that you're not going to accept refugees and the second one is, why are you blaming refugees for Paris attacks? Those two are the most wrong statements you can come up with...for the first... unless you're Native American... we can track back one of your grandparents or both of them and they came on a ship or maybe a plane... the other one is that... there's no evidence that the refugees are the ones that did it...and the refugees, like President Obama said, are running from these attacks, from this violence, so why would I bring it with me?"

Faris gets at the crux of the problem: the West is conflating Syrian refugee crisis with the terrorism caused by the disenfranchised Middle Eastern youths living in Europe and the United States. The West needs to recognize that refugees are not the cause of terror. In fact, the West fuels terror- both the terror that Fouad escaped in Syria and the terror seen in Paris- by denying its Muslim youths a real chance at success. Even worse, Europe and the United States demonstrate that they have not learned from this grave reality when they refuse Syrian refugees.

Europe and the United States have, first and foremost, a moral responsibility to accept refugees. However, the refugee crisis also presents the large opportunity the West will ever have to show hopeful Arab youths, migrants and citizens alike, that they are valued in civil society. Both crises, the terror crisis and the refugee crisis, is not about religion or race- ultimately, it is about Europe excluding and degrading young people, European and Syrian alike, to the point that they have nothing to lose. It feels nonsensical that the same country that welcomed my Iranian family amidst the 1979 Hostage Crisis is so suspicious of the motives of Syrian refugees. In 2019, just 40 years after my father's move from Tehran, I will be graduating from Harvard College. And so while it will be a happy moment to receive my diploma, it will also feel sinister: Aleppo is a mere 1,000 miles from Tehran, and forty years is a second in the history of humanity. Why me, and why not Fouad?