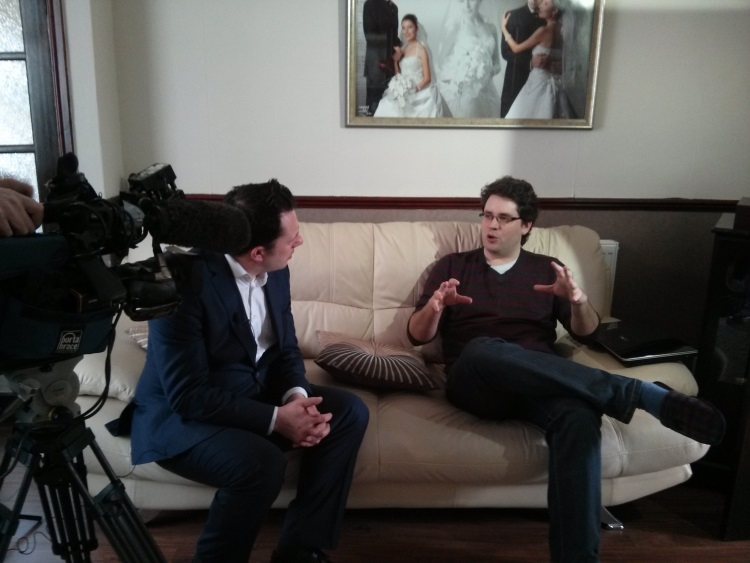 Higgins's own photo of his interview with Channel 4 news

There aren't just citizen journalists now, sending out YouTube clips to the world. Where Syria is concerned, there are now citizen analysts, scouring that footage for weapons tracking. One of them, Eliot Higgins, is known as Brown Moses. He's no soldier; he's the father of a toddler in England, a self-taught analyst of these videos who works out of his living room watching thousands of clips posted by fighters on both sides of the Syrian conflict daily. Higgins was the one to blow the lid on Croatian-made arms use in Syria that led to the New York Times investigation exposing the fact that the weapons were smuggled to Croatia from Jordan by Saudi Arabia. He recently held an Indiegogo campaign to be able to continue this kind of work instead of his day job as a financial advisor. To my surprise, the organizations that use his information regularly and follow him on Twitter, from the Guardian, who profiled him, to Human Rights Watch, to the New York Times, didn't immediately ensure he could keep doing what he was doing. So although I'm a 28-year-old humanities graduate student on a budget, I pledged $75 to his cause. Thus began a back-and-forth between me and the unassuming 34-year old whom Peter Bouckaert, Human Rights Watch Emergency Director, calls "among the best out there when it comes to weapons monitoring in Syria." Higgins interviewed me about my work to get Syrian refugee stories out into the world this summer, contributing to my campaign in turn, and I approached him with the idea for an interview for the Huffington Post audience. What follows is a thoughtful and active citizen's informed take on all things Syria--and check out his blog and Twitter feed if you're concerned about the escalating civil war there.

What are your aims?

I've always had an interest in current events, and back in 2011 I was following the events of the UK phone hacking scandal and Arab Spring very closely.  I saw so much information coming through social media, not all of it reliable, and saw so many interesting things that were overlooked by the mainstream media.  At the start of 2012 I decided to start a blog, really to gather and examine information from social media for myself more than anything.  I saw so many blogs that took a position, then wrote around that position, that early on I made sure I stuck to the facts rather than editorialising my posts too much, especially as I was really writing the blog to improve my own understanding of the conflict, so why lie to myself?

As time went on there was such a vast amount of information coming through social media channels from Syria it began to dominate my time, and then I started to build up a reputation and following for working on Syria,  so I focused more of my energy on it.  It's now reached the point where I've been able to fund working full-time on the blog, as well as getting funding to translate my blog posts into Arabic on a separate version of my blog.  I've also separated my UK phone hacking scandal work to a separate blog, and I have someone who regularly contributes to that who produces some really fantastic work on the whole scandal.

How do you see the situation shaping up?

The situation in Syria is getting worse by the day, making the international response increasingly complicated.  There's a situation now where doing nothing would almost certainly allow the conflict to escalate and spread, with sectarian issues getting more severe as time passes, but the problem is at this point taking action has nearly as many unpredictable and negative consequences.

It seems to me that the only thing the world can do that's not full of negative consequences is help the refugees coming from Syria as much as possible, because there's going to be a lot more of them, and they'll be refugees for a very long time.

How on earth did you get started analyzing footage out of Syria, anyhow, and how'd you tell whose weapons came from where?

It's pretty much because I wanted to find out all the little details I could from the videos coming out of Syria that I could, so that meant doing a lot of research, searching for details on weapons, discussing them with arms experts, and so on. After doing it for so long I really got a good sense for what I expect to see in videos from Syria, and I check hundreds of Youtube channels on a regular basis for new videos, so if anything looks odd I spot it right away, then start investigating.

To me, the Croatian weapons I spotted in early 2013 stood out like sore thumbs when I first saw them, and the sheer quantity made me think they were worth looking into. Someone who wasn't familiar with videos coming from the conflict probably wouldn't have spotted the significance of those weapons appearing.

What do you think of the international response to the situation?

I think the international community has allowed the situation to go on for so long that it's now running out of control, dragging other countries into an increasingly sectarian conflict, in particular Iraq and Lebanon. I was recently asked what a post-Assad government would look like, but at this point I find it very hard to imagine any sort of government running Syria after Assad, more likely warlords running their own personal fiefdoms.

While the international community argued, debated, and scratched their heads over Syria it seems Syria has turned into a nightmare beyond anyone's control.

In your opinion what do you think the long term situation will be for the international community when dealing with the Syrian refugee crisis?

I believe the international community needs to be prepared for dealing with a massive refugee population from Syria for years, if not decades, to come. I really don't see the conflict being over anytime soon, and even after this conflict there's likely to be more fighting across the country, if not the region, in the aftermath of the conflict. They really need to prepare for the worst.

What have some of the reactions been to your work?

There's been a really great reaction from journalists, NGOs, researchers, activists, analysts, etc, about what I do with the blog, and I have a lot of contact with them discussing various issues relating to Syria. I used to have a number of critics who thought I was rabidly pro-opposition, although they've mostly gone quiet since I helped the New York Times expose the Croatian arms being smuggled to the opposition by Saudi Arabia. Then, of course, people who weren't familiar with my earlier work accused me of being pro-Assad for doing that. There's also the loonies who repeatedly send me messages to tell me what an awful person I am, and how I must be working for the CIA/MI5/MI6/Mossad/George Soros, etc.

What was the most surprising thing about your Indigogo campaign, and your experience with becoming something of a public figure, followed by Human Rights Watch and profiled by The Guardian?

Whenever someone tells me that people at the UN, Department of Defense, or UK Foreign & Commonwealth Office, etc have told them they read my blog it's pretty weird. It makes me wonder who else might be reading it.

If you were to give people in the USA and UK words of wisdom based on what you know as a result of this work, what would they be?

Syria is a very complex conflict, and anyone who tries to present events in Syria as black and white, good versus bad, either doesn't understand the conflict, or is trying to pull the wool over your eyes.

What do you think about the June 13 news on the USA's decision to augment support for the opposition in Syria?

I believe at this point there's really no good options left in Syria; anything, even inaction, has potential terrible consequences, and the situation is highly unpredictable. Since Hezbollah involvement in the conflict, in particular in Qusayr, sectarian tensions have escalated rapidly, and seem likely to continue to escalate judging by the events of the last few days. The problem with inaction is the conflict is already starting to spread beyond the borders, and is likely to continue to do so if the conflict carries on with no end in sight.

I've thought about the question of what do in Syria a lot, and every scenario seems dangerous and unpredictable, with long term consequences for the entire region. It's truly a nightmare scenario. My one hope is that all these countries who are pursuing military intervention will also put as much, if not more, effort into dealing with the refugee situation, because I believe that's something the international community will be dealing with for decades to come, and they need to be prepared for it now.

And finally, the really basic one: why "Brown Moses"?

It's all pretty random. About 12 years ago I was registering to an internet forum, and I was listening to Brown Moses by Frank Zappa at the time, so I used that as a name. It stuck with me, and when I came to start the blog last year I was already on Twitter as Brown Moses and posting elsewhere under that name, plus I didn't think anyone would bother reading the blog, so I just used that. Had I registered to that forum 3 minutes later I'd be "The Evil Prince".