Mohammad returns home to a quiet house around 11 p.m. each day. He has five sisters, but they're all asleep by the time he's finished his laborious 12-hour shift at Al-Mnajjid Sweets in Jordan.

At just 12 years old, the Syrian boy can no longer attend school because he needs to help provide for his family, a video produced by UNICEF reports. In fact, his classroom days are so far behind him, basic academic tools have left his memory.

"I used to be able to write. Here, I forgot everything," Mohammad said in the video. "I can't even hold my pencil."

Mohammad is one of the approximate 1.1 million children refugees who were forced to leave their home country to find safety away from civil conflict in Syria, AP reported. Incredibly, about 75 percent of those children are younger than Mohammad.

Mohammad's story is being featured in UNICEF's "My Voice, My Story" series, which follows the heartbreaking tales of Syrian children refugees whose lives have been upended by war. Many of those children have been forced out of schooling and into harsh labor conditions to support their struggling families. A recent photo series by the U.N. refugee agency, for instance, captured a group of teenaged boys working in a Lebanese charcoal seller for less than 70 cents an hour.

Many of these children, similarly to Mohammad, feel the burden to make ends meet.

"I feel there's pressure on me. I must work. If I didn't work who would help us?" Mohammad said in the video by UNICEF, also noting both of his parents have fallen sick. "All the anger is contained in my heart. I don't let it out to anyone. Sometimes I feel I want to cry, but I can't. It's all in my heart."

To learn more about UNICEF's "My Voice, My Story" campaign and take action, visit the organization's website.

This Syrian Boy Forgot How To Write After Being Torn Away From School. He's 1 Of A Million
Syrian-born artist helps child refugees 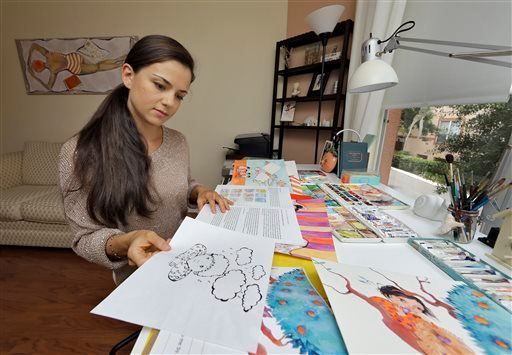 1 / 3
In this May 12, 2014 photo, Lina Safar displays some of her illustrations at her home in Tampa, Fla. Safar, originally from Syria, is helping the displaced children of her home country with her art.
AP Photo/Chris O'Meara