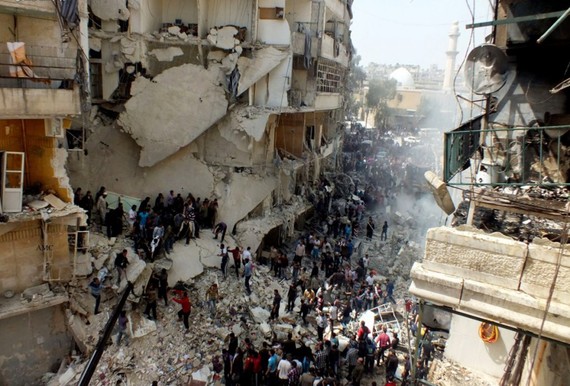 Nobody would dispute that Syria is a tragic mess. What started as civil unrest has been wildly exacerbated by external players who have pursued multi-contradictory agendas in that country. The mass migration of refugees serves as a graphic reminder of the human cost.

Thus far, the only way to 'win' the interminable war for Syria was if one power emerged victorious over the others with no concern for life or democracy. Perhaps Russia's bold intervention has forced all the parties to the negotiating table in earnest in recognition that if the ethos of 'winner takes all' prevails, it might not actually be them.

The most radical change of all is that Iran is now in Vienna at the invitation of the Americans. According to the New York Times, senior American officials had "begun to acknowledge in recent weeks that no serious discussion of a possible political succession plan in Syria can happen without Tehran's involvement." One senior diplomat stated that "to leave the Iranians out of the conversation was 'simply ignoring reality'".

This invitation is problematic for nearly all the other players excepting Russia. There are vociferous interests in the US, in Israel, Saudi Arabia, Qatar, Jordan and the Gulf States which all have close ties to the US, all of which fear that the success of the nuclear negotiations has negatively empowered Iran to interfere in regional affairs. Riyadh firmly blocked previous UN-led efforts to bring Iran into talks. The fact that King Salman has apparently given way reflects US determination, Saudi weakness and international desperation about Syria.

Iran's inclusion, as well as being a significant shift for the US and its western and Arab allies, is as highly significant for Iran as the nuclear negotiations were in that Iran has already shown signs of compromise. "In any political process the role played by Bashar al-Assad will be important," Iran's deputy foreign minister, Hossein Amir Abdollahian, told The Guardian in an interview last week.

"We are not working for Assad to stay in power forever as president, but we are very cognizant of his role in the fight against terrorism and the national unity of that country. The people of Syria will make the final decision and whatever decision they take, we will endorse." This should begin to calm the fears of those players who believe that any Iranian help to get rid of ISIS is focused on giving military support to President Bashar al-Assad in his effort to remain in power.

Only recently Iran had stated that it would not get involved in further negotiations with the US after the July agreement. This move now indicates that all sides understand this is not about Assad, it's about national interests. In this respect it is important for all sides to understand what the endgame is.

What is the aim of negotiations? It cannot be just about ending the violence, although that is the first step. The objective of negotiations must be to hold free and fair elections in Syria and allow the people to decide their own future. This requires not only the existence of a sovereign state but a peaceful and stable state. Only when the fighting has stopped can refugees feel safe to return home and the country begin to rebuild its civic, economic and political life.

At present the chaos in Syria is being exploited to the full by terrorists, not only ISIS but others too. ISIS - terrorism - thrives in the land of no negotiations. Terrorist groups are by nature totalitarian, believing in winner takes all and that the ends justify the means. Any political interest group which rejects negotiations echoes this totalist ideology. This is exactly what they want; continued chaos and military spending and the destruction of the civil society and of the infrastructure and economy of Syria. Indeed, those who call for the balkanization of Syria and the ousting of President Assad are resistant to the idea of negotiation because they are on a path to attack Iran.

To create an effective response to the violence requires everyone else getting on the same side. To do that each country must tune out these dissenting voices in each of their countries and treat the negotiating partners not as enemies but as rivals with legitimate concerns and interests. Each must acknowledge the need to compromise and accommodate these rivals.

The players now gathered in Vienna comprise Russia, the US, the UK, Turkey, Saudi Arabia, the UAE, Lebanon, Qatar, Jordan, Germany, France, Egypt, Italy. With Federica Mogherini on board for the EU and China and Oman possibly involved, the stage is set for real progress. All these players need to engineer a stable and peaceful Syria before they can pursue their interests in relation to the other rivals. If they continue to regard themselves as enemies rather than rivals, there will be no progress.

Indeed, many of the fears that such rivals each express will be resolved through this engagement. Each party will be held to a minimum respect for the other countries' interests. This will begin to curtail the continuation of unilateral activity.

For those who say Iranian adventurism and expansionism must be contained, this is the best step - get Iran involved in negotiations in which it has a direct interest. During the long protracted nuclear negotiations Iran at least proved itself as a rational negotiating partner, and has shown no signs of reneging on the agreement. The lesson learned is 'do not exclude and isolate your foes'. Only by meeting with Iranian leaders and talking through these concerns can a mutually beneficial path be beaten to lead the region out of chaos.

As the Vienna talks kick off, one thing is certain: there is not going to be an absolute winner. Just as there wasn't an absolute winner of the nuclear deals. That is the nature of negations. Unlike military solutions there is no 'winner takes all', but the payoff is that there is an absolute loser and that is terrorism and the violent forces which have been taking advantage of the gap provided so far by not negotiating.