ANTAKYA, Turkey -- Haj Faraj is fed up. The 36-year-old Syrian rebel commander, who says he leads a small brigade of 50 fighters just over the border, is angry, nearly broke, and more worried than ever.

For much of the Syrian civil war that has now claimed more than 140,000 lives and displaced millions, the commander and his men were part of an independent, moderately religious unit in coastal Latakia, a province largely controlled by the Syrian regime. But eight months ago, cash-strapped and disenchanted with what he deems a corrupt and disconnected Western-backed political opposition, Faraj says he and his brigade joined the ranks of Liwa Al-Ashr, a larger, fiercely Islamist rebel group.

"If you are a tool in someone’s hand, you will live luxuriously," Faraj says, sitting in his simple home that houses several Syrian refugee families in this border city. "But if not, you are poor."

As the Syrian civil war enters its fourth year, what started off as a pro-democracy uprising has morphed into vicious combat, including fights between rebel groups that range from Western-backed secular fighters to extreme Islamists. The fractured opposition has become largely dominated by hardline Islamist groups like Liwa Al-Ashr. In turn, more and more commanders like Faraj are now making the move from moderate groups into the Islamist camp, hoping to gain support and halt the disarray that has allowed President Bashar al Assad's regime to take the offensive.

Faraj says the groups that seek to violently enforce strict Islamic law are undermining the efforts of other rebels who, while also religious, do not follow the same interpretation of Islam. And yet like many others, his desperation for arms and support outweighed his aversion to joining these groups.

"Syria will not become an Islamic state," he says loudly, as if trying to convince himself.

Faraj’s move is a risky one. He believes the regime will eventually fall and that the Islamist groups will start a second war based on religion, but decided that joining up with them was perhaps the only way to help defeat Assad.

Before the war, Faraj was a boat operator who spent his days on the Mediterranean Sea making a meager living. While life may have been simpler back then, he laments that he was never really free. “We lived in a depression in Syria,” he says. “We wanted to start a revolution.”

When protests erupted in Syria in the spring of 2011, Faraj says he was one of the first in his small village in Latakia, just 60 miles southwest of Antakya, to give up on peaceful demonstration and turn to the only form of protest he thought might bring real freedom: armed resistance. As the war dragged on, one by one, Faraj watched as his neighbors and friends left for safer ground. Now, his hometown is nearly deserted, he says.

When Faraj is not crouched in mountain passes with a Kalashnikov rifle resting on his shoulder, he crosses the border to re-group and plead for more money from rebel and political opposition groups to adequately arm and train his men.

His fight is a family affair. He and his seven brothers have fought together for three years, though he says one died recently in a regime prison, and they all followed him in joining Liwa Al-Ashr. His 19-year-old nephew, Ahmad, also took up the fight after Faraj gave him a 15-day crash course in warfare. 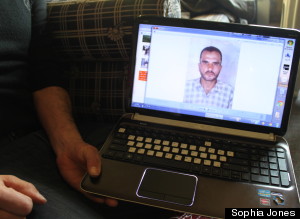 Haj Faraj clicks through photos on his laptop, pausing at one of his late brother who he says died recently in prison.

"Most of these groups are based on very local politics," said Joshua Landis, a Syria expert and director of Oklahoma University’s Center for Middle Eastern Studies. "They emerge out of a town, out of a family. They act as an independent unit and they become supreme in their quarter square kilometer in Syria."

So far, Faraj hasn't benefited from joining Liwa Al-Ashr. He’s still desperate for cash. Recently, he had to sell some of his weapons to pay off debts from other groups who loaned him money, only amplifying his dire need for arms.

And what was a last-ditch effort to give his brigade a better chance at surviving could now be the reason he loses key battles -- or his life. Like many other small rebel brigades that team up with larger groups for money and support, he’s lost his autonomy.

"When you need to raise money, you have to go out and pass around a hat," Landis said. "And that requires that you give loyalty to some other bigger fish. It is a lot like a feudal system. This little guy who may be in charge of his village can’t remain independent. And once you team up and you get some bigger commander, they may screw your village."

Though Faraj is a deeply religious man, he says he feels disconnected from Liwa Al-Ashr because of its extreme ideology. He is discouraged by the group's alliances, such as its joint operation with Jabhat al-Nusra, al-Qaeda’s Syria branch that has been designated a terrorist group by the U.S. Department of State.

He says Jabhat al-Nusra is comparable to an even more extreme al-Qaeda offshoot, the Islamic State of Iraq and Islam, known for kidnapping and killing critics of Islam. The group repeatedly clashes with other Islamist rebel groups, vying for both land and power. Intra-rebel conflict since early January has claimed more than 3,000 lives.

Faraj feels further detached from Liwa Al-Ashr's because of its promotion of sectarian violence. The group's Facebook page is flooded with examples of extreme violence against Assad’s Alawite minority religious sect, an offshoot of Shiite Islam with a strong base in Latakia.

"After we’re done with the regime, we’ll have another war," Faraj says.

The Western-backed political opposition has done little to alleviate the rebel infighting, Faraj says. The group, called the National Coalition for Syrian Revolutionary and Opposition Forces, is at odds with most of the religious rebel groups in Syria. Many rebels slammed its decision to head to Geneva for peace talks earlier this year and collaborate with the United States.

"The political opposition is just talk, just a shadow over us," Faraj says as he clicks through photos on his laptop. One picture is of a young Ahmad posing with a Kalashnikov. The next is of another nephew who he says was captured and burned alive by the regime after a battle. He stops at the last photo for a few breaths. It’s a picture of his dead brother.

"I tried to contact opposition funders, but they all shut their doors," he mutters, shaking his head.

The commander takes particular issue with Ahmad Jarba, the leader of the political opposition, and rebel leaders like him who he says lead "luxurious lives" outside of Syria while rebel fighters on the ground suffer immensely.

"You’ve got this handful of well-educated Syrians who know how to speak to the State Department and CIA officials," Landis said. "They’re being trotted around and put on stipends. And then you have these guys living hand to mouth. And they’ve had it."

"They can’t even play the game of lying about tolerance and democracy," he continued. "The guys in the fancy hotels can because they’ve never been on the battlefield. They’ve gotten their families out. But these other guys are getting barrel bombed in their villages."

Faraj says that personal vendettas and battles for power among opposition leaders and brigades are killing the revolution. But he’s not ready to give up the fight just yet. He can’t imagine the alternative of laying down arms for good and joining his family in Turkey as a refugee.

Sitting next to Faraj is his young bride who he married just five months ago. He looks at her like she’s the only one in the room. Every time he leaves, he says he doesn’t know if he’ll ever see her again.

"Maybe I’ll be shot," he says as he moves a bird cage holding canaries to his open window. When he’s home in Antakya away from the fighting, he spends hours sitting in his living room listening to the birds. He's teaching them to sing because the sound calms him, he says in a rare break from talk of war.

But then, he pauses, as if remembering his own reality.

"When you go to the coast, you make a sand castle," he says, alluding to the years he’s spent fighting, seemingly in vain. "And then the water comes and destroys it like you didn’t build anything at all."