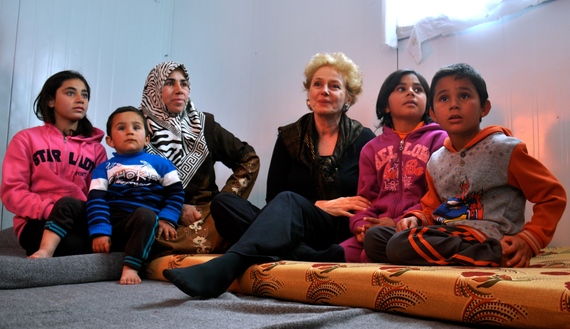 From a distance, it looks like a billowing sea of white on an endless flat plane. But, as our car approaches, the sea takes form. We are in a vast city of tents and trailers. This is the Za'atari refugee camp. With up to 88,000 Syrians in residence, it is now the fourth largest city in Jordan and the second largest refugee camp in the world.

I expected to see a place of abject misery -- and there was much of that. But, I also saw a startling affirmation of life and the building of a community -- a testament both to the resilience of Syrians and the hospitality of Jordanians.

As we walked through the camp, almost all the young boys and girls shouted "hello" -- in English. Some went so far as to say: "How are you?" The adults were more guarded. Yet, everywhere there were signs of life.

There is a main street in Za'atari, which runs the length of the camp. It is known as the "Champs Elysee." The residents stroll or ride donated bicycles up and down the street, which is densely lined with shops on both sides. You can buy almost anything there: baked goods, electronics, bridal gowns, produce, shoes, appliances, hardware, toilets. There are also cafes. All of these makeshift shops are made from bits of leftover building material. We ate lunch in a restaurant, constructed of corrugated siding. Its walls and ceilings were painted in vivid hues and the entrance featured a spurting fountain on which soft drinks were displayed. 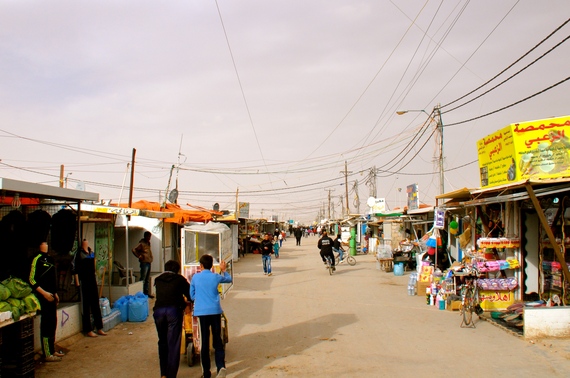 In visiting one refugee family of eight, we were greeted with a colorful "Mikey Mous" cartoon painted on their caravan. We were immediately offered coffee and the children shyly gathered around. I asked the man of the house, if the Syrian civil war is not resolved soon, would he apply for resettlement or stay in the refugee camp? He said he would rather stay in the camp because it is close to home. "We breathe the same air as Syria. The Jordanians are our brothers." But, just the day before, he told us, one of his younger daughters said to him: "I don't want to die in Jordan. Please let's go home."

The Syrian refugees are under strict Jordanian jurisdiction. They are policed by Jordan authorities, and while they can form community councils, they are not themselves permitted to serve in an official capacity. Jordan also has a law prohibiting refugees from working, so as not to compete with Jordanians -- even as some refugees are licensed to operate their own small businesses within the camp.

To be sure, Jordan has been doing the best it can, straining its infrastructure and resources to the breaking point to accommodate wave upon wave of refugees -- Palestinians, Iraqis and now Syrians. This is especially remarkable considering that Jordan has no legal obligation to the Syrian refugees, as it is not a signatory to the 1950 Convention on Refugees.

For example, Jordan has permitted some refugees to be licensed to operate their own small businesses within the camp. These businesses have created an internal economy that generates a GDP, according to unverified numbers heard by our guides, of more than $14 million a month.

Jordan has also introduced community policing within Za'atari and has outsourced its implementation to Siren, a highly experienced Northern Ireland firm. The community policing stations are designed in such a way that there are private rooms for residents to speak with officers who serve as a liaison between the refugees and the many NGOs providing services within the camp, as well as Jordanian officials. It has taken a great deal of confidence building, but the Colonel who runs Za'atari proudly told me that he has received several hundred reports of gender violence -- an indication that the most vulnerable are now willing to come forward with their problems.

Still, the refugee crisis grows more desperate, as the Syrian Civil war enters its fifth year with no end in sight.

According to HM King Abdullah II, there are now 1.4 million Syrian refugees in Jordan -- about 20 percent of that nation's population. Only 20 percent of them live in refugee camps. The rest are urban refugees, many of whom are unregistered and don't have access to the services available in camps. They are isolated, vulnerable to exploitation, and struggle to survive.

Despite the enlightened policing, the camps are known to be dangerous places -- especially for women. And women and children make up 80 percent of the refugee population. While camps provide schooling, not all the children attend school.

Jordanian schools operate double shifts to accommodate the urban refugees who live outside the camps -- but that's not enough to serve all the children. A generation of Syrian children are at risk of being lost.

And what happens when the smiling young children who greeted us with "hellos" become teenagers who have grown up in the confines of Za'atari? If they see no future, they will become vulnerable to manipulation and radicalization. We have seen it before. We're about to see it again.

The world must step up and act now to provide the assistance, education and political solution -- before a generation of a nation is lost to extremism.