In a few days, snow will blanket the mountainous areas of Lebanon, where many Syrian refugees live. Throughout the region, a brutal winter is just around the corner, according to weather forecasters. For Syrian refugees living in Lebanon, Jordan and surrounding countries, time is running out. 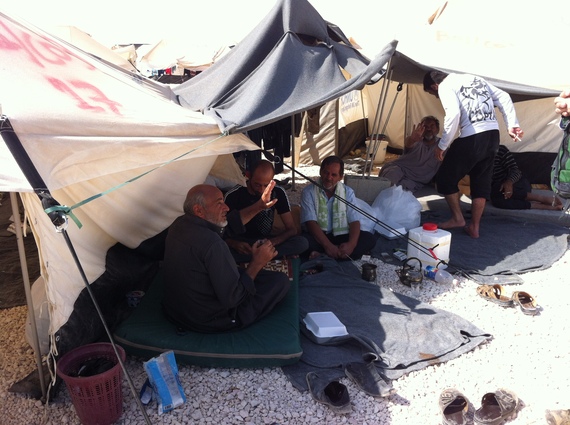 There were 20,000 Syrians living at Zaatari refugee camp when I visited there a year ago. Today, the number exceeds 100,000 crammed into the two-square mile camp. Worldwide, the number of Syrian refugees has swollen from 300,000 a year ago to more than two million, with an estimated 4 million displaced within their own country.

According to the United Nations, the Syrian refugee crisis is the worst since the Rwandan genocide in 1994, yet humanitarian organizations have so far received only a fraction of the donations given in response to the Haiti earthquake and Indian Ocean tsunami; and with the focus on the typhoon that has recently struck the Philippines, there are concerns that aid to Syria will diminish.

From the beginning of the crisis, Syria was not a priority for donor countries. Governments that made Syria their casus belli invested more in guns and ammunition than food, shelter and medicine. Syria is the battleground of a proxy war, and the Syrian people are caught in the middle.

I've recently returned from Lebanon, where close to 1.5 million Syrian refugees have taken up residence. The official number stands at about 800,000 -- which represents only the number of Syrian refugees who have actually registered with the United Nations High Commissioner for Refugees (UNHCR) headquarters in Beirut. Almost as many remain unregistered.

The refugee situation in Lebanon is utterly different than in other host countries, such as Jordan, where conditions are tough in camps like the one at Zaatari, yet access to aid and services are nevertheless manageable and self-contained. Technically, there are no "refugee camps" in Lebanon because the Lebanese government, fearing a scenario similar to when Palestinian refugees ended up staying in the county for decades, has decided not to erect them.

Instead, there are more than 400 "encampments," or informal tented settlements, spread across the country. Some of these encampments have morphed into corrugated tin shanties or "tanak camps," as the Lebanese refer to them. Tanak is the Arabic word for sheet metal or tin. The resulting lack of organization and infrastructure at the settlements makes the work of local and international aid agencies challenging.

Basic information could save lives -- but many Syrian refugees in Lebanon have little awareness of the lifelines that might be readily available to them. Where is the closest clinic or hospital? Where can one obtain potable water? This is the type of information that refugees are in desperate need of.

UNHCR developed a LEBANON Winterization Partner Coordination Map, which has been distributed to embassies and international organizations. However, there is no solid plan for how to get that information to refugees in desolate areas. Many Syrian refugees in Lebanon do not have access to electricity, Internet or mobile technology. The fortunate few have access to satellite TV and can watch regional channels such as al Arabiya, al Jazeera and Lebanese and Syrian news programs, which by and large focus on the conflict itself rather than those who have been affected by it.

With the onset of winter, many children and elderly who are among the refugees will certainly suffer. Some will perish. And it will be due not just to the weather and a lack of adequate shelter, but to the absence of proper information -- news that people can use, to improve their situation.