BEIRUT, March 13 (Reuters) - A boy of 12 sees his best friend shot through the heart. Another of 15 is held in a cell with 150 other people, and taken out every day to be put in a giant wheel and burnt with cigarettes.

Syria's children are perhaps the greatest victims of their country's conflict, suffering "layers and layers of emotional trauma", Save the Children's chief executive told Reuters.

Syrian children have been shot at, tortured and raped during two years of unrest and civil war, the London-based international charity said in a report released on Wednesday.

"This is a war where women and children are the biggest casualty," chief executive Justin Forsyth told Reuters during a visit to Lebanon, where 340,000 Syrians have fled.

Forsyth said he met a Syrian refugee boy, 12, who saw his best friend killed outside a bakery. "His friend was shot through the heart. But initially, he thought he was joking because there was no blood. They didn't realise he had been killed until they took his shirt off," he said.

The Save the Children report cited new research carried out among refugee children by Bahcesehir University in Turkey which found that one in three reported having been punched, kicked or shot at.

It said two thirds of children surveyed said that they had been separated from members of their families due to the conflict and a third said they had experienced the death of a close friend or family member.

"All these children tell you these stories in a matter of fact way and then you realise that there are layers and layers of emotional trauma there," said Forsyth.

Syria's civil war started with peaceful protests against the dynastic rule of President Bashar al-Assad. His forces shot at protesters and arrested thousands and soon the revolt turned into a civil war. Rebels now control large swathes of Syria.

Millions have fled their homes for safer ground or neighbouring countries. Save the Children says 80,000 people are living in barns, parks and caves and children struggle to find enough to eat.

Both government forces and rebels have been accused of targeting civilians and committing war crimes. Refugees say that Assad's soldiers are directly targeting children.

Forsyth said he met one child who said he was in a prison cell with 150 people, including 50 children.

"He was taken out every day and put in a giant wheel and burnt with cigarettes. He was 15. The trauma that gives a child is devastating."

Save the Children says that some young boys are also being used by armed groups as porters, runners and human shields, bringing them close to the front line.

Rape is being used to deliberately punish people, said Forsyth, adding that it is underreported due to the sensitivity of the issue, especially among conservative communities.

"In most conflicts, over 50 percent of rapes are against children. And I am sure that is the case in this conflict too."

Fear of sexual violence is repeatedly cited to Save the Children as one of the main reasons for families fleeing their homes, according to the report.

It said that there are also reports of early marriage of young girls by families trying to reduce the numbers of mouths they have to feed, or hoping that a husband will be able to provide greater security from the threat of sexual violence.

Forsyth said that he met a Syrian family in Lebanon who told their 16-year-old daughter to marry an older man. "Her mother said she is beautiful and every time the (Syrian) soldiers came to the house she thought: 'They are going to rape her.'"

"Rape is being used deliberately to punish people," he said, adding that girls as young as 14 are being married off.

Save the Children works in neighbouring countries and within Syria but Damascus has restricted access to aid organisations, especially in opposition-held territory.

The charity called for unfettered and safe access to humanitarian agencies, including "access across the lines of the conflict", and for Damascus to ease bureaucratic restraints.

Despite pledges of $1.5 billion by international donors for a response plan to help Syria's displaced, only 25 per cent has been funded, the United Nations says. (Editing by Kevin Liffey/Mark Heinrich) 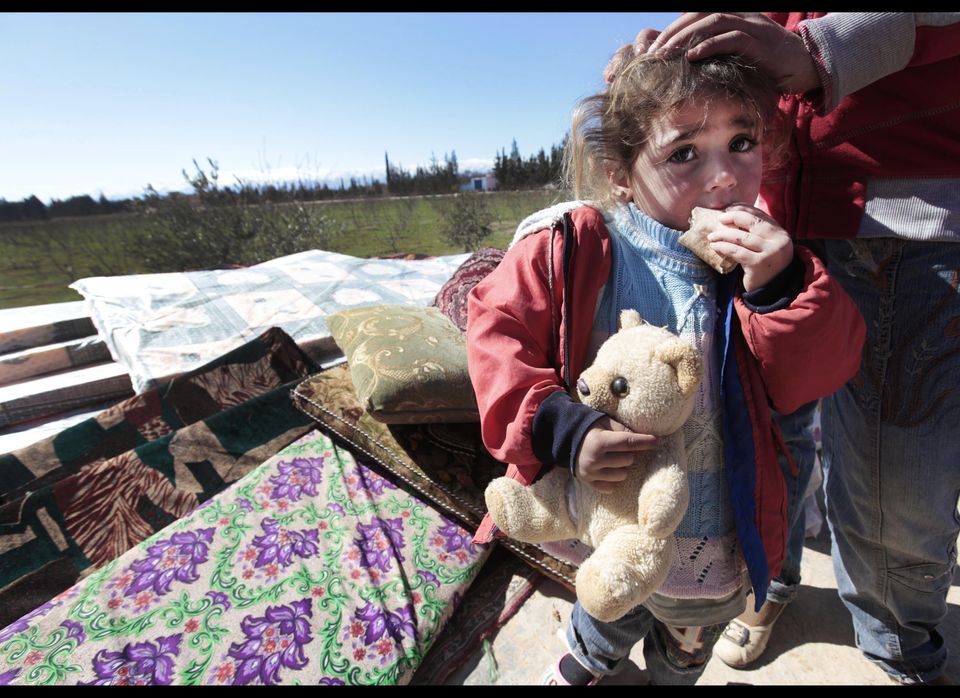 1 / 12
A Syrian child is seen with her family who fled from the Syrian town of Qusair near Homs, at the Lebanese-Syrian border village of Qaa, eastern Lebanon, Monday, March 5, 2012. More than a thousand Syrian refugees have poured across the border into Lebanon, among them families with small children carrying only plastic bags filled with their belongings as they fled a regime hunting down its opponents. (AP)
AP