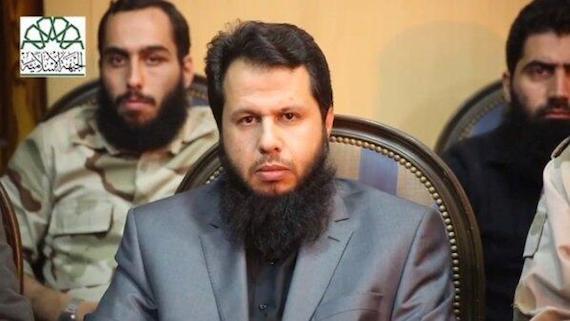 Syria's largest rebel group, Ahrar al-Sham, lost almost its entire senior leadership late on Tuesday, in an as-yet-unexplained explosion that took place during a secret meeting in Syria's northern Idlib governorate near the border with Turkey. While some reports have claimed a suicide bomber, a chemical attack, or a car bomb was responsible, the most likely scenario appears to be that a government airstrike targeted the meeting, which was taking place in an underground bunker. The airstrike set fire to an attached ammunitions depot, which consequently meant the bunker was filled with acrid smoke, causing suffocation. An apparent lack of bodily wounds on the victims' bodies would appear to fit this account.

Whatever the cause of the deaths, amongst those killed was Ahrar al-Sham's leader, Hassan Abboud (Abu Abdullah al-Hamawi), who was also the political leader of the Islamic Front coalition -- a major Islamist force consisting of roughly 50,000 fighters -- in the fight against the Syrian government. In total, at least 45 people were killed in the apparent attack, with some estimates as high as 75. According to initial reporting (including a partial list released by the Islamic Front), senior officials killed included:

The morning after the attack, Ahrar al-Sham's Shura Council announced the appointment of a new senior leadership, with Hashem al-Sheikh (Abu Jabbar) appointed as Ahrar al-Sham's new leader and Abu Saleh Tahan as the new military chief. Abu Jabbar is the former leader of Ahrar al-Sham operations in the town of Maskanah in eastern Aleppo, where his forces notoriously clashed with ISIS in late-2013. While the surprisingly fast pace of these new appointments serves to underline Ahrar al-Sham's long-time reputation for being intensively well organized, it is as yet unclear what direction Abu Jabbar's appointment will take the group. However, Ahrar al-Sham will undoubtedly remain a determined anti-ISIS force in the weeks and months to come.

Whilst the largest rebel group in Syria, Ahrar al-Sham has also long been perceived as one of the most hardline, with several senior members retaining close links to Al-Qaeda. Mohammed Bahaiah (Abu Khaled al-Suri), for example, was a prominent member of Ahrar al-Sham, often seen alongside Hassan Abboud, but his extensive history (dating back to the late-1990s) within the top echelons of Al-Qaeda meant that Ayman al-Zawahiri appointed him his chief mediator during the outbreak of hostilities between Al-Qaeda affiliate Jabhat al-Nusra and the Islamic State in Iraq and al-Sham (ISIS) in early 2014. Abu Khaled's death in a suicide bombing in February was consequently blamed on ISIS.

Although the Islamic Front has struggled to remain a truly united coalition in recent months, considerable moves were being made within Ahrar al-Sham's senior leadership towards adopting a more pragmatic posture in Syria. Speaking both in public and in private, senior political officials began as early as April 2014 to present a more moderate and cooperative stance, especially in terms of the group's religio-political objectives.

Moreover, senior Ahrar al-Sham officials also began discussing the possibility of joining a broader and more representative opposition structure, incorporating both military and political components. This hayat al-arkan -- an idea shared by many other factions -- has been a subject of frequent discussion within elements of Syria's armed opposition. Although Ahrar al-Sham's name was excluded from an August 3 announcement by 18 rebel groups -- including the Islamic Front's Jaish al-Islam and Suqor al-Sham, as well as several U.S.-backed groups -- who were uniting under a new Revolutionary Command Council, Ahrar al-Sham later joined the list on August 21.

Whoever was responsible for this apparent attack, the consequences could potentially be very significant. Hassan Abboud was a widely respected individual whose intellect and fluent English skills -- he was previously an English teacher, who during the conflict was known to tweet in English, sometimes even paraphrasing Margaret Thatcher - lent him considerable influence within and outside Ahrar al-Sham and the Islamic Front. He was almost certainly a crucial barrier preventing young Syrian Ahrar al-Sham fighters from joining Al-Qaeda (Jabhat al-Nusra) or even ISIS.

In over two years of periodic discussions this author held with Abboud, he appeared a conflicted academically minded individual, who on one side, was attracted by the original jihadist ideals of Abdullah Azzam and Abu Musab al-Suri, which encouraged devout religious piety and the need for jihad as a means to fight against oppression, with another side more akin to today's more moderate Syrian revolutionary, determined simply to defeat Assad and bring about a more prosperous Syria. Just as Syria's civil conflict was gaining intensity in early-2012, he spoke passionately about the total lack of Islamic understanding exhibited by Al-Shabab, Boko Haram, and much of the Taliban.

Judging by the identifies of those killed and the nature of those who remain alive, including Abu Jabbar, it would seem Ahrar al-Sham's senior leadership has lost a balance it previously managed between moderates and hardliners, with the latter now more openly dominant.

However capable Ahrar al-Sham's new leadership proves to be - it also includes others not killed in the attack, such as Talal Bazerbashi (Abu Abd al-Rahman al-Suri), Abu Mustafa, Abu Sufyan al-Shami, and Khaled Abu Anas -- it seems likely that at least some extent of defection will occur. An apparently more hardline-dominant Ahrar al-Sham leadership could serve to re-cement relations with Jabhat al-Nusra and to benefit actors on the extremist end of the scale, although this could also spur some fighters to defect towards moderates.

While actual conflict dynamics against the government and ISIS are unlikely to be negatively affected (except perhaps for operations in Aleppo), the most significant consequence is that the fate of the Islamic Front now looks desperate. Other than Ahrar al-Sham, the Islamic Front's three largest member factions, Jaish al-Islam, Suqor al-Sham, and Liwa al-Tawhid, have all begun swaying closer towards the moderate semi-establishment camp in recent weeks, thereby putting pressure on the durability of an Islamist alliance that was founded in November 2013 as an explicit expression of opposition to moderate opposition bodies linked to Syria's exiled opposition leadership. Should it occur, the dissolution of the Islamic Front will likely be a long and drawn-out process, but it would offer an invaluable opportunity for moderate opposition structures to co-opt what have long been Syria's most powerful rebel factions.

Charles Lister is a Visiting Fellow at the Brookings Doha Center in Qatar. Follow him on Twitter, here: Charles_Lister

Amendment: After publishing this article, the leadership of Ahrar al-Sham contacted this author and stated that Abu Khaled al-Suri was not a founding member of Ahrar al-Sham, but did join the group at a later stage. His appointment to judge between Jabhat al-Nusra and ISIS was decided by Ayman al-Zawahiri due to the fact that he was a member of neither organisation.