T-Mobile knowingly billed customers for hundreds of millions of dollars in bogus charges, according to a complaint filed by the Federal Trade Commission on Tuesday.

The agency said T-Mobile tacked these fees onto cell phone bills, labeling them as charges from third-party texting services that pushed content like flirting tips, horoscopes and celebrity gossip.

T-Mobile customers never signed up for these services, but were typically charged $9.99 per month for them.

“We have seen the complaint filed today by the FTC and find it to be unfounded and without merit,” T-Mobile CEO John Legere said in a statement posted online. He claimed that T-Mobile stopped charging for these text-based services last year and has already provided full refunds to anyone affected.

In its press release, the FTC posted an example of a bill from a T-Mobile customer that was hit with one of these so-called "cramming" charges, in this case for trivia-based text messages. When this customer viewed his or her bill online, the charge was buried under vague and inscrutable categories like "Usage Charges" and "Premium Services." 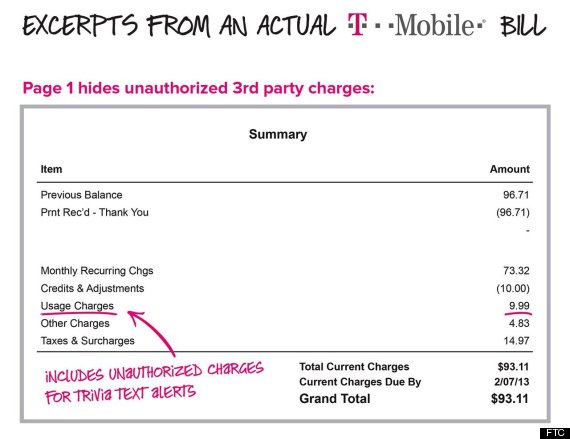 If the T-Mobile subscriber printed out the entire bill, the charge did not appear until page 123. Even then, it said nothing about trivia texts. 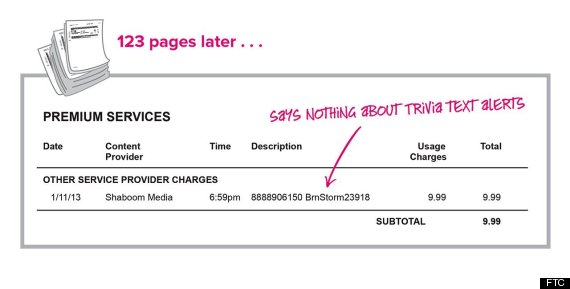 The FTC argues that T-Mobile knew these bogus fees were occurring because customers have been complaining about them since at least 2012.

"It’s wrong for a company like T-Mobile to profit from scams against its customers when there were clear warning signs the charges it was imposing were fraudulent," FTC Chairwoman Edith Ramirez said in a statement.

Criticizing larger competitors for high prices and excessive fees is a key part of T-Mobile's marketing campaign. Legere is emphatic on the point. Last month, he went on an expletive-filled rant about AT&T and Verizon’s prices during a public presentation, in which he compared their practices to rape. He later apologized.

Read the entire FTC statement below:

In a complaint filed today, the Federal Trade Commission is charging mobile phone service provider T-Mobile USA, Inc., with making hundreds of millions of dollars by placing charges on mobile phone bills for purported “premium” SMS subscriptions that, in many cases, were bogus charges that were never authorized by its customers.

The FTC alleges that T-Mobile received anywhere from 35 to 40 percent of the total amount charged to consumers for subscriptions for content such as flirting tips, horoscope information or celebrity gossip that typically cost $9.99 per month. According to the FTC’s complaint, T-Mobile in some cases continued to bill its customers for these services offered by scammers years after becoming aware of signs that the charges were fraudulent.

Excerpts from an actual T-Mobile bill. Page 1 hides third party charges. Summary item ‘Usage charges’ includes third party charges for ‘Brain Facts’ text alerts. 123 pages later, under Premium Services, Other Service Provider Charges, the ‘Brain Facts’ text alerts show in the Description field as 8888906150 BrnStorm23918, total $9.99.
Excerpts from an actual T-Mobile bill showing cramming charges. (click to view full-size)
“It’s wrong for a company like T-Mobile to profit from scams against its customers when there were clear warning signs the charges it was imposing were fraudulent,” said FTC Chairwoman Edith Ramirez. “The FTC’s goal is to ensure that T-Mobile repays all its customers for these crammed charges.”

In a process known as “third-party billing,” a phone company places charges on a consumer’s bill for services offered by another company, often receiving a substantial percentage of the amount charged. When the charges are placed on the bill without the consumer’s authorization, it is known as “cramming.”

The FTC’s complaint alleges that in some cases, T-Mobile was charging consumers for services that had refund rates of up to 40 percent in a single month. The FTC has alleged that because such a large number of people were seeking refunds, it was an obvious sign to T-Mobile that the charges were never authorized by its customers. As the complaint notes, the refund rate likely significantly understates the percentage of consumers who were crammed. The complaint also states that internal company documents show that T-Mobile had received a high number of consumer complaints at least as early as 2012.

The FTC has made significant efforts to end mobile cramming. In the last year, in addition to holding a public workshop on mobile cramming, the Commission has filed several lawsuits against alleged mobile cramming operations Jesta Digital, Wise Media, and Tatto Inc. According to today’s complaint, T-Mobile billed its customers for the services of these FTC defendants as well as an operation sued by the Texas Attorney General.

The complaint against T-Mobile alleges that the company’s billing practices made it difficult for consumers to detect that they were being charged, much less by whom. When consumers viewed a summary of their T-Mobile bill online, according to the complaint, it did not show consumers that they were being charged by a third party, or that the charge was part of a recurring subscription. The heading under which the charges would be listed, “Premium Services,” could only be seen after clicking on a separate heading called “Use Charges.” Even after clicking, though, consumers still could not see the individual charges.

The complaint also alleges that T-Mobile’s full phone bills, which can be longer than 50 pages, made it nearly impossible for consumers to find and understand third-party subscription charges. After looking past a “Summary” section as well as an “Account Service Detail” section, both of which described “Usage Charges” but did not itemize those charges, a consumer might then reach the section labeled “Premium Services,” where the crammed items would be listed.

According to the complaint, the information would be listed there in an abbreviated form, such as “8888906150BrnStorm23918,” that did not explain that the charge was for a recurring third-party subscription supposedly authorized by the consumer. In addition, the complaint notes that consumers who use pre-paid calling plans do not receive monthly bills, and as a result the subscription fee was debited from their pre-paid account without their knowledge.

When consumers were able to determine they were being charged for services they hadn’t ordered, the complaint alleges that T-Mobile in many cases failed to provide consumers with full refunds. Indeed, the FTC charged that T-Mobile refused refunds to some customers, offering only partial refunds of two months’ worth of the charges to others, and in other cases instructed consumers to seek refunds directly from the scammers – without providing accurate contact information to do so.

The complaint also notes that in some cases, T-Mobile claimed that consumers had authorized the charges despite having no proof of consumers doing so.

The FTC’s complaint seeks a court order to permanently prevent T-Mobile from engaging in mobile cramming and to obtain refunds for consumers and disgorgement of T-Mobile’s ill-gotten gains.

The FTC thanks the Federal Communications Commission and its Enforcement Bureau for their invaluable assistance with and close cooperation and coordination in this matter.

This article has been updated with comment from T-Mobile.