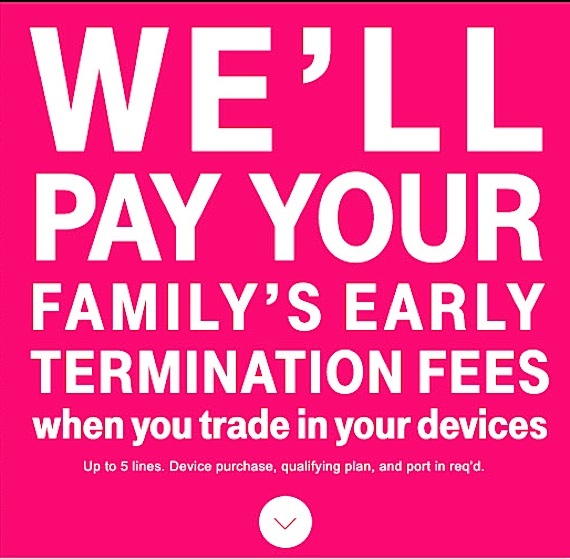 When someone says, "C'mon, I'll buy you dinner," you assume that your generous dining companion will whip out their wallet when the check shows up. When you're sitting in a bar and a member of the opposite offers to buy you a drink, you fully expect them to plunk a bill on the counter after your Rum Collins arrives. When you're a bit short on the rent and your roommate offers to pick you up this month, you expect to not have to scratch up some scratch for another 30 days.

Conversely, your roommate does expect you to pay her back at some point. When your buddy says he'll buy the tickets to that playoff game, you and he expect you to pay him back -- without asking. When your eldest sibling buys that expensive anniversary gift for your parents, you'll be expected to pitch in your share.

Why am I belaboring such obvious social remunerative constructs? Because the difference between "I'll pay for" and "I'll pay you back" seems to have eluded T-Mobile.

Two months ago I decided to switch from AT&T to T-Mobile. I am beguiled by T-Mobile CEO John Legere's decidedly un-corporate behavior at his company's press events as well as the company's efforts to remake the relationship between mobile carrier and customer and the mobile industry at large. It's hard not to love Legere's and T-Mobile's un-carrier campaign confound its often silly-looking larger rivals.

What I especially loved, and the prime reason behind my switch to T-Mobile, was the elimination of international roaming fees. My wife and I make at least four overseas trips a year, and each one costs us at least $200, usually more, in international data roaming charges each trip. Even if my monthly T-Mobile bill ends up being a bit more than AT&T, we'll end up saving around a $1,000 a year just in international usage charges.

But we were stuck with AT&T. As a tech reviewer, I bought a new iPhone each year, with my "old" iPhone going to my wife. Switching from AT&T would cost me a fortune in early termination fees, plus I'd have to buy new phones.

At CES 2014, at the last-minute T-Mobile press event, Legere informed the assembled media (including me) that T-Mobile would pay mine and your ETF to switch, PLUS reimburse me for AT&T phones I'd trade in to buy new T-Mobile versions.

After the usual indecisive procrastination -- even with the belief I'd been ripped off by international roaming charges, I'd been loyal to AT&T since they, as Cingular, were the only carrier to champion Steve Jobs' vision for remaking the mobile business. Leaving the only carrier I'd ever had -- I wandered into a T-Mobile store with a heavy heart to finally initiate the switch.

The switch process was relatively easy and smooth, and took maybe 45 minutes. Toward the end of the process, I casually queried the salesman.

"So, you guys will take care of my early termination fees, right?"

Mind at ease, I completed the switch process. Not only did I get two sparkling new iPhone 5ss, but a 32 GB iPad Mini Retina with free-for-life connectivity as well as a micro SIM card for the beautiful HTC One (M8) I became enamored with during testing, and unlimited LTE data connections for all.

I should not have been at such ease.

Put it on my bill

A month later, I got both my first T-Mobile bill, which was less than my monthly AT&T bill even though I'm now paying $60/month in installments on our three new devices and included heavy use of my new phones during a week traipsing around Turkey, and my final AT&T bill.

The latter included $410 in ETF fees.

Puzzled, I called the T-Mobile store. It turns out T-Mobile doesn't actual PAY your ETF. YOU pay your ETF and T-Mobile will reimburse you.

Your ads, your Web site -- hell, your CEO scatological screeches from every soapbox he climbs on that YOU'D pay my ETF. As aforementioned, when someone tells me they'll pay for me, I assume that means you'll pay for me. If you offer to take me out to dinner, buy me a drink or pay my rent, I do not expect to have to shell out any shekels. To me and the rest of the English speaking world, when you say "I'll pay that for you," I don't think it unreasonable of me to expect you to actually pony up.

Of course, buried in its Web site is slightly different and less in-your-face "reimbursement" details. I then reviewed my original coverage of the Legere press event, and Legere did lay out the whole "reimbursement" scheme.

Mea culpa. But most folks would only have seen T-Mobile's "We'll pay your ETF" promotions and interpret their import the way I did. And, as we have seen, there's a vast difference between "we'll pay" and "you have to pay me back." T-Mobile seems to think these are the same thing.

But T-Mobile's reimbursement rascality didn't end with this you-pay/we-pay-you-back revelation.

After you submit your bill online with the ETF for reimbursement, you do not get a check. You get a prepaid MasterCard, which I cannot deposit into my bank account to use as I see fit. And the card won't arrive for up to eight weeks.

Two months? I have more than $1,000 in mobile bills thanks to my huge ETFs I have to pay NOW.

AT&T was nicer than they should and could have been about me delaying my final payment considering the circumstances, which induced a new wave of switch guilt. Perhaps AT&T hopes I'll return one day and wanted to leave a good impression. Mission accomplished.

And maybe I will return. It all depends on how T-Mobile reacts to this rant and which carrier more quickly rolls out LTE Advanced networks.

At the end of the day, I'm glad for the lack of international roaming charges and worry-free unlimited data, but T-Mobile's horribly misleading "We'll pay your ETF" process may have permanently soiled my buyer's satisfaction.