How many tabs do you have open right this second? Eight? Twelve? A gazillion?

Now, a web app called Tab For A Cause will take your browser's blank canvases and transform them into a way to donate to charity. Each time you click "new tab" in Chrome or Firefox, the app populates the page with blogs about causes such as education and poverty, as well as advertisements.

Signing over your browser tabs will help empower communities to create sustainable water supply systems through Water.org and establish local language libraries for kids through Room to Read, for example. Other charities that receive donations from the app include Human Rights Watch, Conservation International, International Peace Institute and Save the Children.

Created by Silicon Valley residents Alex Groth and Kevin Jennison, Tab For a Cause donates one-tenth to one-fifth of a cent each time a user opens a new tab, the Los Angeles Times reports.

Groth, 22, who graduated this year from Pomona College in Claremont, Calif., told the Los Angeles Times he simply wanted to make giving more accessible. "In college it doesn't seem like any donation I can give to a charity is going to be very impactful," he said. "And I kind of wanted to create a way where everyone can be giving to charity regardless of your monetary worth at that time."

Tab For a Cause isn't the first app to turn everyday practices into acts of kindness. Fitness app Charity Miles allows walkers, runners and bikers to earn money for nonprofits based on mileage. And the now-defunct Snooze App allowed sleepy users to donate their Zzz's each time they hit snooze. (Let's hope Tab For a Cause doesn't grow tired in a similar fashion).

These apps are all evidence of the best way to reach donors: Make giving as easy as possible, as the Pew Internet & American Life Project study revealed earlier this year.

Still, the top ways in which donors give remain checkout donations and checks by mail, according to YourCause.

Will you use the app? Let us know in the comments below. 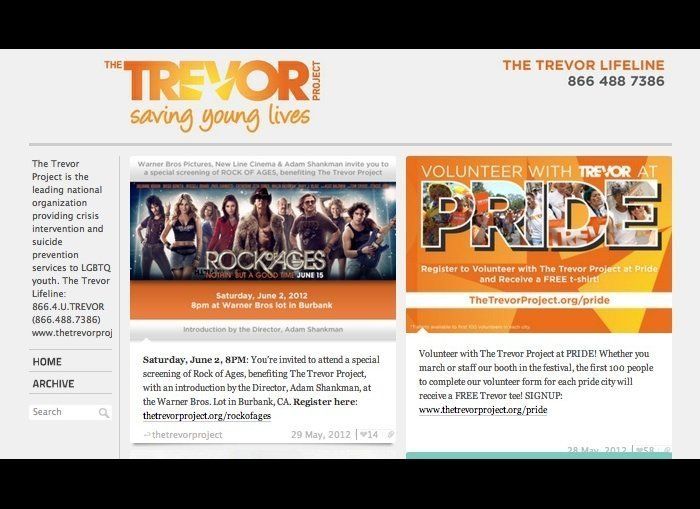 1 / 5
The Trevor Project
The Trevor Project, a national organization for the prevention of suicide and safety of LGBTQ young people, uses hot lines and chat options to ensure the safety of gay youth. Its Tumblr covers everything from LGBTQ pop culture, inspiring messages, and immediate resources for those needing help or wanting to get involved. <em>Check out the Trevor Project's Tumblr, <a href="http://thetrevorproject.tumblr.com/" target="_hplink">here</a>.</em>
Tumblr.com