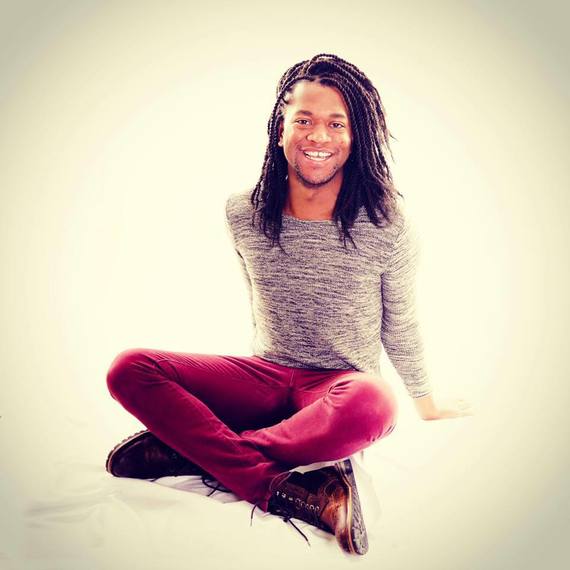 In an interview, Junot Díaz once remarked that the genius women-of-color writers wield is "cultivated out of their raced, gendered, sexualized subjectivities." His words speak both to the revelatory nature of this canon and the extent to which these writers are relegated to literary and ethnographic niches. Simply put: once acknowledged, the architectures these writers illuminate cannot be unseen.

As the consolidation of neoliberal logics and the very visible collapse of superficial dialectics continues (#GirlIGuessImWithHer being a poignant and hilarious example[ii]), so does the work of Black writers in taking up issues of the body (be it fleshed, electoral, spectatorial, etc.)

A recent offering replete with multidimensional analysis and poetic reflection comes from Tabias Olajuawon Wilson. In their debut work published earlier this year, Godless Circumcisions: A Recollecting and Re-membering of Blackness, Queerness, and Flows of Survivance, Wilson reckons with the particularity and echoes of personal and fantastical violence, pointing towards a speculative future without demanding that we, the reader, step in unison. An extraordinary testament to the potential inherent in honest verse, Godless Circumcisions recounts Wilson's experience and observation of self as black, queer, and still breathing. The work critically probes cultural and political theories of the Black Queer self while attending to affect and memory, entwining poetry throughout an offering of personal narratives, essays and unguarded, bare-knuckled verse.

The work is a tour de force if not for the sheer breadth of content, then for the refusal of its sweeping verse to comfort when comfort is not on the menu for the subjects at hand. It is more than unflinching--it unsettles, it bites, it scars, it lingers, and it loves, simultaneously in a language perfected by, common and accessible to those who have perfected the art of living while Black, BlaQueer or Queer.

In the introduction, Wilson declares:

We were born ready, until they brought out the scalpel. The bleeding continues into adulthood--the wound unable to cauterize--as the silent sickness of performativity consumes us. We are unable to be fully present, fully us, whole, anywhere.

This initial violence, one of birth and breaking (into) an anti-black world that is predicated on the prohibition of one's own freedom, is where Wilson begins. Wilson continues, "I yearn to break free from these neoliberal, Godless Circumcisions, loving myself to Cosmic Reconciliations, reuniting with that which was cleaved at birth. This is my journey: a litany for survival."

This "litany for survival" admonishes complacency in the face of incessant violence while cultivating a poetics of undoing, "unlearning," and unrestricted refusal--Wilson does not hold back in naming that which cannot be unseen, that which propels them towards surviving and healing on their own terms.

In the essay, "Black, Gifted & Privileged: Confronting Intraracial Power In The Age of Trayvon," Wilson provides a timely reminder that the polarization of intellectual engagement as defunct is as devastating to the black imagination as the refusal to be critical of the self:

We must offer our skills, resources and talents as supplements to the strategies of those most impacted, and continue to empower and affirm them as the leaders and experts that they are. This is not to say that we should sit on our laurels, and watch the most burdened carry the heaviest loads, but a reminder that we would do well to listen-sometimes in disagreement-before positioning ourselves as the saviors of our kin.

In Godless Circumcisions, the personal is the first and last site of the political, as well as the poetic. Wilson writes:

I marvel at my own fuckery,

the pieces of my

Wilson utilizes modes of correspondence in the text to unsettle notions of time and reflect the fraught uncertainty that constitutes Black contemplative life. In one example, Wilson pens a letter to their 25-year-old-self:

So many of your friends, cousins and acquaintances have died in one way or another. Many sit in the tombs of those gone to glory, but countless more are rotting away in bodies that serve as corporeal prisons: lifeless survivors of capitalisms, black neoliberalism, in/externalized anti-blackness and empty promises of love, home and justice. Yet here you are, alive and somewhere near free. Still though, you struggle to see that freedom, struggle to define what it is, for you and whether that definition is real and true. You wonder whether anything is right or true. In your quest for freedom no, liberation, you have become a wanderlust, post-structuralist of sorts. Can your own mind be trusted or is it endemically poisoned by the epistemologies of power accumulation? Do you own it?"

In their alchemy, stewed in the freedom and funk of blackness, Wilson pleases the pallet with recipes borrowed from Maya, Essex and Baldwin. In this collection you will find pieces that tell stories of trauma, namely racial-sexual terrors and violences (see: "The Raping(s), The Reaping, The Humanistic Renewal"), with humor, vulnerability and a love of self clearly inspired by Maya Angelou's "I Know Why The Caged Bird Sings." In "Fucking Blackness: Explosions, Invasions & Predatory Niggas" and "A Quick Blunt," the reader is greeted with poems that are unflinching their analysis and recollection of black and queer sex, pleasure and global positioning. You will also find harrowing essays--such as "To The Children That Come Next: Eli, Emani & Daiveyon"--that deal with situational privilege and center politics, power and pain as simultaneously structural, familial and personal, harkening back to Baldwin's "A Letter To My Nephew."

This collection births something for everyone and--with quotations of sources as diverse as Kimberle Crenshaw, Patricia Hill-Collins and bell hooks to Janet Jackson, Erykah Badu and Mary J. Blige--it is clear that the author meant to do so. This is a book for everyone: the academic dealing in high and flesh theories, the gay/bi/trans*/non-binary/queer kid searching for proof of their humanity, the black and/or brown person preparing confronting a world of racial-sexual violences and all those with beating, sensitive hearts interested in humanism, a critical love ethic and practice, and the ideals of making a less violent world. In pulling from the wide range of human experiences and sources of knowledge and truth, Wilson skillful induces the reader to participate in their practice of recollecting, re-membering and liberating the full breadth of their blackness, their queerness and their humanity bringing life, conviction and proof to their introductory assertion that:

We were born whole, announcing our presence as we emerged from the flesh of our mothers with grand aplomb, we were whole. There was nothing missing...

Get to know and read more from Wilson at blaqueerflow.com.