We've so been there: On the other side of a table from someone chewing with their mouth open. Wide open. This person could be the dearest, most cherished person in our lives, but such a sight can almost be enough to make you consider never eating with them again.

Perhaps that's not your trigger. "I just won't look at them!" you say, judging us uptight people who demand to have some mystery in their dining experience. Maybe yours is the cell phone, an accessory that is now as normal as a water glass on one's table. It doesn't matter what sort of restaurant you're in, there's at least one couple who spends the entire time glued to their phones. They might as well be at home in front of a television.

Are these the worst things one can do at the table? We say yes. We spoke to two etiquette experts via email, Patricia Napier-Fitzpatrick, president of The Etiquette School of New York and Patricia Rossi, author of "Everyday Etiquette: How to Navigate 101 Common and Uncommon Social Situations," about the most egregious manners violations that can happen come mealtime -- and what you can do about it.

The Huffington Post: What's the absolute worst etiquette "sin" one can commit while eating?

Napier-Fitzpatrick: There are a number of “sins,” but I suppose the worst would be talking with food in your mouth. A close second would be blowing your nose at the table -- particularly if you use your napkin to do so. Other “sins” include putting used silverware back on the table, rather than properly placing it in the “resting” or “finished” position on the plate. Or, another, is putting your used napkin on the table after you have finished eating but your dinner companions are still eating.

Rossi: The #1 sin would be making it all about the food and not the people we are dining with. The focus should be on the relationship, not the food. Ordering difficult-to-eat food distracts from the conversation and relationship building. Eating before everyone has been served. Gulping down food too fast or slow. Not keeping pace with their fellow dinners.

The Huffington Post: Is it ever okay to look at your phone while eating with company?

Napier-Fitzpatrick: As a general rule, cell phones should not be on the table when eating with company. If, however, you are expecting an important call, it is okay to have you phone in your pocket on vibrate. Do let your dinner companions know when you sit down at the table that you are expecting an important call, and if it comes during the meal, you will have to get up and leave the table to take the call. (This is the advice I give to business people.) If friends eating together are okay with each of them looking at their phones during the meal, it is up to them. I personally, however, am offended when someone with whom I am dining looks at his or her phone.

Rossi: We should put our full focus on whomever we are breaking bread with -- it's the perfect situation to build and nurture that relationship face to face. When eating, it adds the sense of taste to the experience of the other senses. Seeing, hearing, the touch of a handshake, etc. When all the senses are involved, being present builds a high trust and like factor. Refrain from peeking at your phone. Let the focus be on the person sitting in front of you. 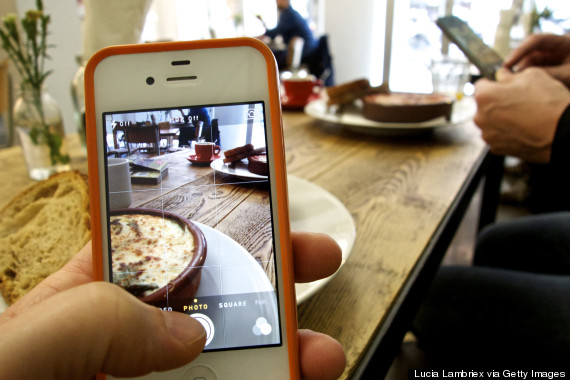 The Huffington Post: How can you tell someone to stop chewing with their mouth open? Especially someone with whom you work and share a space.

Napier-Fitzpatrick: It is considered rude to correct or embarrass someone in front of other people. If someone who is close or related to you -- or perhaps someone who works for or with you -- is continually eating with their mouth open or chewing loudly when they eat, you could “gently” say to them in private that you don’t know if they are aware that they chew with their mouth open; but, just in case, they are not aware of it, you wanted to point it out to them so that they would not embarrass themselves.

Rossi: I would never bring that up, good manners dictates that we never embarrass another person. If it were a very close friend or family member, I would say, "Wow that looks different in your mouth than it did on the plate." While laughing.

The Huffington Post: Which etiquette rules regarding eating, if any, can be considered out-of-date? We were wondering about the whole "eating with elbows on the table" rule, in particular.

One rule that could possibly be considered out of date is men rising from their seats every time a lady leaves and/or returns to the table during a meal.

Rossi: Elbows should not be on the table while eating. They could knock over a glass, fork etc. It also appears as if we are guarding your food, trying to make a human fort around our plates. Elbows are okay on the table once the meal is finished. 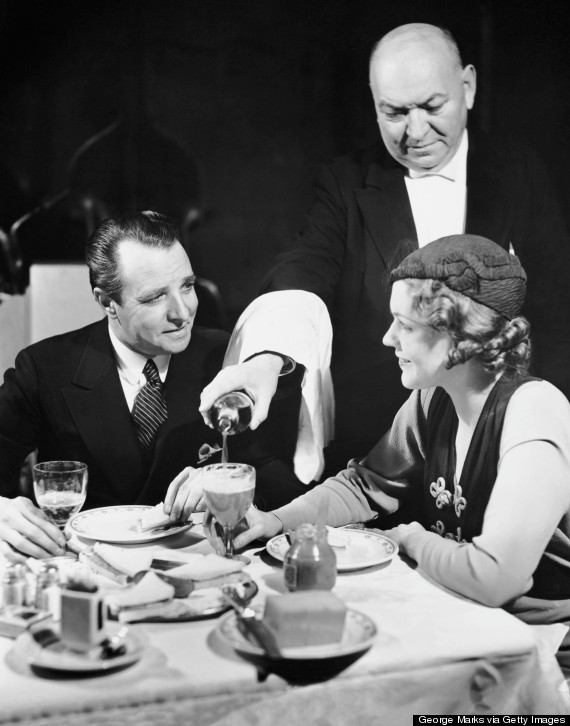 The Huffington Post: What's the right thing to do if someone asks you a question just as you've taken a bite of your food?

Napier-Fitzpatrick: If someone asks you a question when you have just taken a bite, the best thing to do is simply raise your finger as in “just a minute” to let them know you will answer their question as soon as you have finished chewing and swallowed the bite of food.

Rossi: Just motion to wait. It's a quick exchange and has happened to all of us.

The Huffington Post: Let's face it: Some of us have to eat at our desks. Are there any etiquette rules for this situation? Or is eating at your desk, in general, just a no-no?

Napier-Fitzpatrick: Eating at the desk is not a no-no, but there are some rules to be observed. The number one rule is to avoid any food that has a strong odor -- especially if you are seated in an open office plan or in a cubicle, since the odor may linger in the office all afternoon. Avoid messy foods; avoid continually snacking throughout the day; and remove all food containers from your desk when you have finished eating.

Rossi: We are all eating at our desk. Just make sure it isn't smelly and also that it isn't an eat-a-thon. Your desk is a desk. Not a buffet. Be discreet, tidy.

The Huffington Post: What's the best way to move past a faux pas?

Napier-Fitzpatrick: Humor is generally the best way to move past a faux pas. Or, blame it on not feeling well, or having an “off” day.

Rossi: [It] makes us human and likable to have imperfections and the occasional faux pas. Just make a joke and move on.