Many people believe poverty to be one of the world's permanent features. Most find it hard to imagine that poverty could disappear altogether. But one of the most striking aspects of the modern global economy is the remarkable long-term decline in the world's worst forms of extreme poverty. We might actually be on the cusp of ending it.

The new Sustainable Development Goals, or "Global Goals" to be adopted by presidents and prime ministers at the UN later this month, will affirm the world's first formal target for actually doing so, by 2030.

To provide some context, over the past generation the share of humanity living on less than $1.25 per day (in purchasing-power parity terms), the technical benchmark for extreme poverty, has been dropping by roughly one percentage point per year. That rate of progress might seem pretty modest at first, but it translates to a decline from approximately 36 percent of the world living in extreme poverty in 1990 down to less than 12 percent today. These figures reflect the World Bank's most recent estimates, as shown in Figure 1. 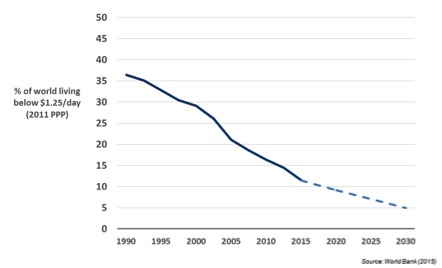 Importantly, progress has been taking hold in every region. China has certainly driven a huge amount of the global gains. But even when excluding China from the calculation, the rest of the developing world is still estimated to be achieving, this year, the Millennium Development Goal to halve the rate of extreme poverty since 1990.

Many individual countries are recording tremendous achievements, including places once presumed to be "basket cases" without hope. In Ethiopia, for example, the share of people in extreme poverty saw a huge drop in only 15 years, from 63 percent in 1995 to 37 percent in 2010. The share in Cambodia plummeted from 32 percent in 2004 to 10 percent in 2011. Vietnam fell from 40 percent in 2002 to a remarkable two percent in 2012.

The overall progress is so great that, on current trajectory, the world's extreme-poverty rate will fall to around five percent of humanity by 2030, as shown by the dotted line in Figure 1. That represents extraordinary progress by any historical scale, although it also implies more than 400 million people still struggling to survive below the threshold. Of course trajectories should not be confused with predictions, and aggregate figures only tell one part of the story. Most worryingly, too many countries are still not seeing progress.

The pivotal question is therefore how to travel the last mile and get the numbers down to zero, everywhere. My best bet is that the challenge will boil down to tackling three big issues.

The first is the generalized challenge of boosting the farm-based economies of rural sub-Saharan Africa. This is fundamental because Africa is now home to the largest number of extremely poor people -- roughly 400 million today -- the majority of whom still live on farms. For many geographic and historical reasons, Africa remains the world's only region not yet to have experienced the initial jump in farm productivity that helps boost savings, investment, and ultimately even job prospects in cities. Some countries are showing early signs of such a "green revolution," but major government and business investments are still required to remove key hurdles.

The second issue is the complex challenge of promoting stability in societies struggling to escape downward spirals of conflict and poverty -- places like Burundi, Nepal, and Yemen. There are no silver bullets to any poverty challenge, but this one is probably the toughest. That said, countries like Cambodia, Ethiopia, Rwanda and Vietnam all show that sustained development success is possible following protracted conflicts. Looking forward, one big part of a solution is to invest in resilience against economic shocks and even climate shocks. Compelling evidence shows that when the rains fail and crops fail, people are more likely to fight.

Of course, these are just initial guesses as to how one of humanity's most epic long-term challenges might imminently be solved. One beauty of the new global goals is that they set a common reference for debate. In the coming years, we will likely discover new roadblocks alongside opportunities to jump forward. These should prompt ongoing course corrections as the world veers toward success. Thus the foremost priority as we set forth on these new global goals is ultimately very simple: to commit seriously, with open minds, to the imperative of actually reaching them.

This post is part of a series produced by The Huffington Post, "What's Working: Sustainable Development Goals," in conjunction with the United Nations' Sustainable Development Goals (SDGs). The proposed set of milestones will be the subject of discussion at the UN General Assembly meeting on Sept. 25-27, 2015 in New York. The goals, which will replace the UN's Millennium Development Goals (2000-2015), cover 17 key areas of development -- including poverty, hunger, health, education, and gender equality, among many others. As part of The Huffington Post's commitment to solutions-oriented journalism, this What's Working SDG blog series will focus on one goal every weekday in September. This post addresses Goal 1.