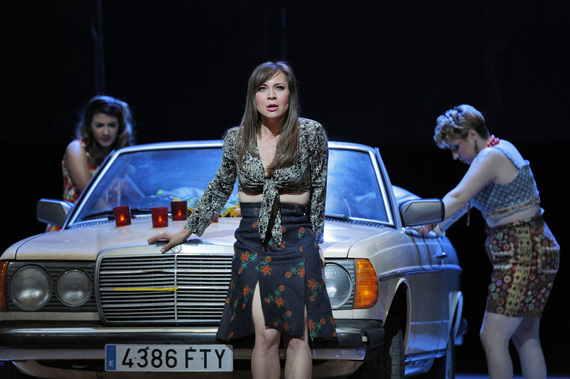 Carmen (Irene Roberts) as a hapless little street whore who takes her panties off to straddle her Don José (Brian Jagde) in a parking lot? And who puts them back on when they are interrupted by his rival, another one of her Johns? But wait, it gets better. Hasn't he just knocked her to the ground a moment earlier because she hasn't had a great reaction to his love declaration, his "Flower Song"? Well, she's probably used to getting knocked about; she still puts down the blanket for sex with him next to the Mercedes Benz of her smuggler pals.
With such a start, there isn't far to go before gallant Don José knifes her in front of the bull ring. If he can't have her, no man will, especially not Matador Escamillo she has an eye on and who looks and acts more like a shoe salesman (croaky-voiced Zachary Nelson). As Bizet's final tragic chords ring out, Don José drags her corpse behind him like a trophy, like he's the Matador, the macho winner over the woman.
Carmen as a tart and a piece of meat is one of the main ideas in Calixto Bieito's 1999 production that is as new to the States as the Catalan director himself. He is considered the "Quentin Tarantino of Opera," because his productions of the classics are doused in sex, blood and gore. Anything is good for a scandal, for a bit of a breeze in the stuffy old temple, so it seems, and Bieito delivers. Ever since he set Mozart's Entführung aus dem Serail (2004) in a bordello where nudity, torture, fellatio and murder go hand in hand and everybody is gunned down in the end, he's been the darling of high-end Eurotrash. So at least with Carmen one would have expected a shocking splash of blood and bullets, but hell, no. You only get a "tacky, tawdry and tasteless" (the Daily Mail) stew, spiced up with predictable sadism, gratuitous violence, nudity, and murder. (Fallatio was spotted by a critic in a Mercedes coupé, but not everybody was sitting up high enough to enjoy the view.) 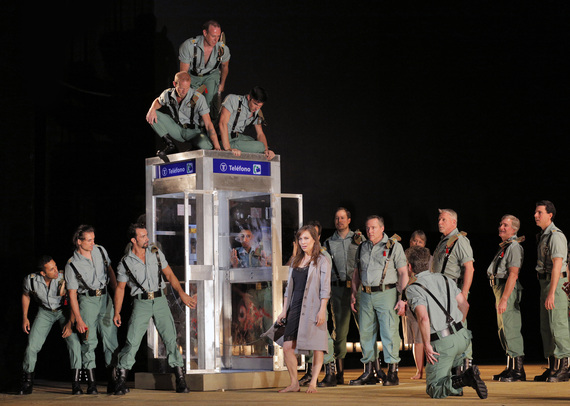 Carmen is not worth much creative thought to this director. Post-Franco era settings of Carmen abound on the international opera stage, and here she has nothing going for her. Drab, bedazzled and depressed, in the grey coat of her cigarette factory, she emerges from a phone booth to the soldiers' hurrah. There is nothing "gypsy" about her. No rose in her unkempt hair. She doesn't flirt, doesn't throw glances, doesn't dance, doesn't even move her hips--the soldiers do that for her, letting out the bear with their gyrations, but for what? Her "Habanera," the song about l'amour bohème or gypsy love? Mezzo Irene Roberts has a decent voice and sings well, but the gap between the passionate, provocative song and her down-trodden attitude is as wide as the stage. Carmen could just as well not sing at all with all those men going bonkers while she presents a bit of her leg every now and then. This girl called Carmen must be really really cheap. 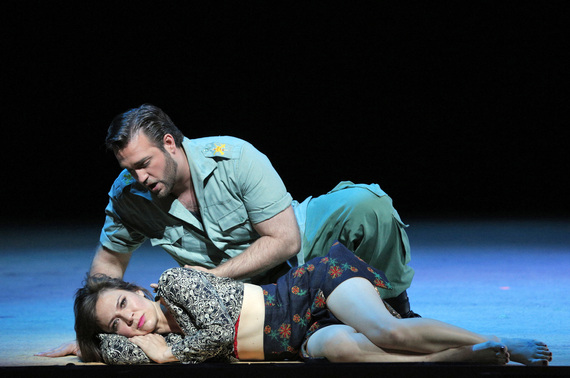 Don José doesn't fare any better. He suddenly appears from the throng of soldiers to face his rival, the drill sergeant Moralès (Edward Nelson). One stud like another, looking at the dissociated Carmen between them, and somehow she comes up with a crumpled red flower that she tosses on the floor in Don José's direction. That's all? That's not the man Bizet portrayed in the story based on Mérimée's novella--a reluctant, rather shy and bottled-up guy who has a village sweetheart and shows no interest in Carmen. He's the only one in the battalion who is indifferent to her seduction and of course she picks him--that is, in Bizet's story: "...mais si je t'aime, prends garde à toi!--"---but if I love you, watch out!" He has no story here; he is a cypher, and the tenor, Brian Jagde, doesn't manage the vocal and physical charisma to break through the confines of Bieito's direction. He is just like the other soldier brutes whose "primal virility" (translate: sadistic violence) is, according to the program notes, what most interested the director. The soldiers force one of their own to run in circles in his underwear until he falls dead, and they are ready to attack any skirt that comes into view, especially of course Don José's village girlfriend Micaela (a stand-out Ellie Dehn) who dresses and behaves not like an innocent but more like "one of these insolent bitches" (as the updated supertitles have it).
We get no sense of Don José's disgrace and decline into despair when he deserts from the army and joins Carmen's smuggler thugs. These Mafiosi guys beat the drill Sergeant to a pulp and simultaneously fornicate on the hoods and roofs of their luxury sedans. Drama, for Bieito, is conveyed by fist punches and banging of car doors. The trashy women (Carmen's side-kicks, Amina Edris and Renée Rapier doing their job well) constantly quarrel, hiss and show their claws, then decorate a kitschy Christmas tree between the cars for a small girl who already knows how to perform an erotic dance. With these clichés, the director and the revival director Joan Anton Rechi proudly proclaim "a high livel of reality." 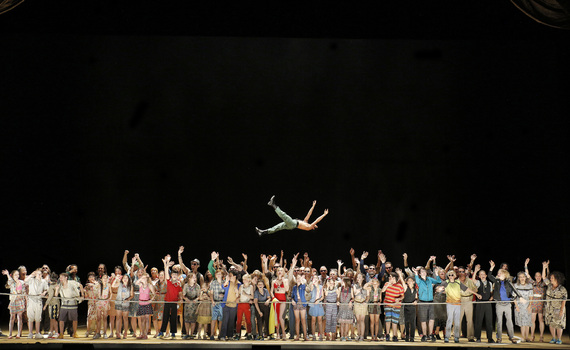 In spite of excellent group choreography and physical as well as vocal performance work by the SF Opera chorus, this Carmen never rises from the gutter. Everything is emotionally as flat and meaningless as the black box of the stage, in front of which the singers appear like colorful cardboard cutouts that photograph really nicely. The damage to the characters and their story is considerable as one couldn't care less about them in the absence of passion and an authentically doomed destiny. A Carmen who has neither power nor freedom nor pride; who is always in fear, a victim from the moment she steps onstage, is like being invited to a musical feast and handed an empty glass of wine. But there is no musical feast. Bieito disregards the music like some irrelevant factor in his "reality show." Conductor Carlo Montanaro plays the (shortened) score at great speed, which helps get to the end of something one barely hears as the clashes between music and stage are so deafening. Bizet's Carmen, of course, expresses and narrates the very opposite of the director's concept. It celebrates a female free spirit who is a goddess to men, who is utterly unafraid of them and their sex, and who will rather die than cowtow to a man and give up her freedom--"la liberté, la liberté!"