Associated Press: Taco Bell is launching an advertising campaign Friday to fight back against a lawsuit charging its taco filling isn't beef.

The print ads say, in huge letters, "Thank you for suing us. Here's the truth about our seasoned beef." They go on to outline the meat's ingredients. The chain did not say how much it is spending on the campaign, but such ads in national newspapers can cost more than $100,000. 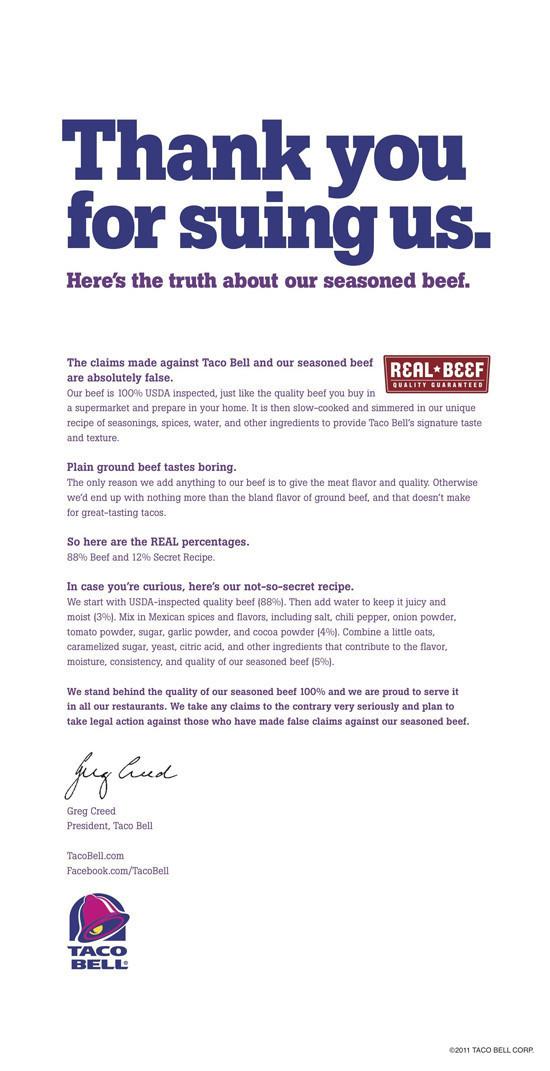 The class-action lawsuit was filed late last week in federal court in California. It claimed Taco Bell falsely advertised its products as "beef." The suit alleges that the fast-food chain actually uses a meat mixture in its burritos and tacos that contains binders and extenders and does not meet requirements set by the U.S. Department of Agriculture to be labeled beef.

The lawsuit, filed by the Alabama law firm Beasley, Allen, Crow, Methvin, Portis & Miles, doesn't specify what percentage of the mixture is meat. But the firm's attorney Dee Miles said the firm had the product tested and found it contained less than 35 percent beef. The firm would not say who tested the meat or give any other specifics of the analysis.

Taco Bell says its seasoned beef contains 88 percent USDA-inspected beef and the rest is water, spices and a mixture of oats, starch and other ingredients that contribute to the "quality of its product." The company said it uses no extenders.

Still, the company couldn't ignore the case after it made headlines and quickly spread online.

"This is one of those things that could be a humongous threat to their brand, which is why Taco Bell has taken such an aggressive stance on this," said Marc Williams, an attorney at Nelson Mullins Riley & Scarborough with extensive experience in fast-food litigation.

The case, Williams said, is thin in potential legal liability. Lawyers would have to prove that most consumers expect and believe they are getting something other than what Taco Bell actually serves. Most fast-food customers, he said, realize taco meat has other ingredients besides beef. And the lawsuit cites U.S. Department of Agriculture guidelines for labeling ground beef, which don't apply to restaurants.

The USDA's rules apply to meat processors – the companies Taco Bell buys its meat from. Tyson Foods Inc., the company's largest meat supplier, said it mixes and cooks the meat at three USDA-inspected plants and that the meat is tested daily to make sure it meets requirements.

Claims of false advertising typically are regulated by the Federal Trade Commission.

Industry and public relations executives say it's critical for the company to respond forcefully to head off damage to its reputation. However, most say it's unlikely to seriously dent Taco Bell's image or business, which serves 35 million people a week.

"I don't think the impact is going to be all that large," said Janney Capital Markets analyst Mark Kalinowski. "It lacks the sensationalism of (other cases)."

Wendy's, for example, had its image temporarily tarnished by a woman who falsely claimed that she found part of a finger in her chili. And it's not the huge recalls that have stung some food makers.

Other restaurants have faced similar cases without being hurt much.

Rubio's Restaurants Inc. faced a lawsuit in 2006 when a disgruntled customer felt that it was misleading people by selling lobster tacos and burritos at its Mexican restaurant chain made with langostino, a different species from the classic Maine lobster. The company settled the case by offering California customers coupons.

Yum Brands Inc., Taco Bell's parent company, would not say if there has been any impact on its sales, citing a quiet period before its earnings release on Feb. 3.

Fast food generally does contain additives, such as the "isolated oat product" (usually used as a flavor and moisture enhancer) found in Taco Bell's meat, but experts say they're no different than whats in processed foods sold in stores.

"There is nothing really frankenfood in here," said Karen Ansel, a registered dietitian and spokeswoman for the American Dietetic Association. "These are in a lot of foods we eat."

The lawsuit doesn't specify monetary damages but asks the court to order Taco Bell to stop marketing it under its current terms.

"That leads me to believe it's more about generating publicity and legal fees for a lawyer than correcting a societal wrong," Williams said. 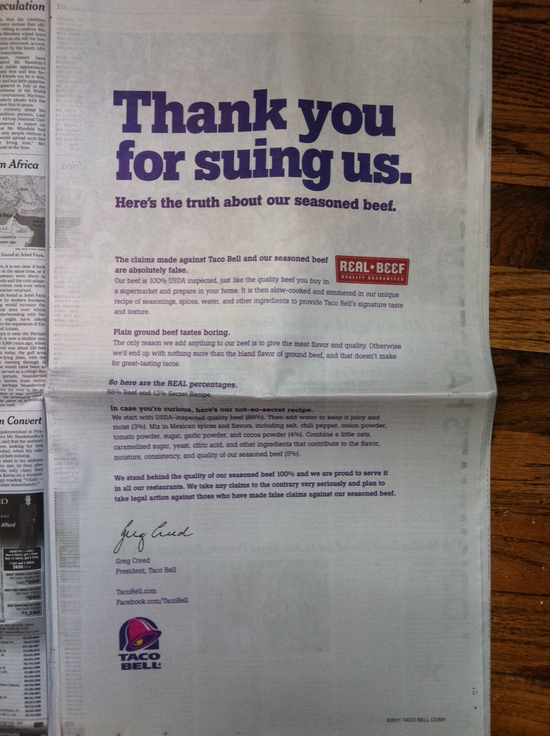