While Taco Bell has been waging war on breakfast -- or sorry, duking it out with the rest of the fast food industry in what has been dubbed the "breakfast wars" of 2014 -- the chain quietly launched a new page on its website. This new page on TacoBell.com details the "other ingredients" in Taco Bell's beef.

A new module on Taco Bell's site allows anyone who's curious to find out what's really in their taco beef. Viewers can click on some of the confusing ingredients and find out what the hard-to-pronounce words really mean. If you've ever wondered why oats are on the ingredient list for Taco Bell's beef, for example, you can now find out. Sort of. 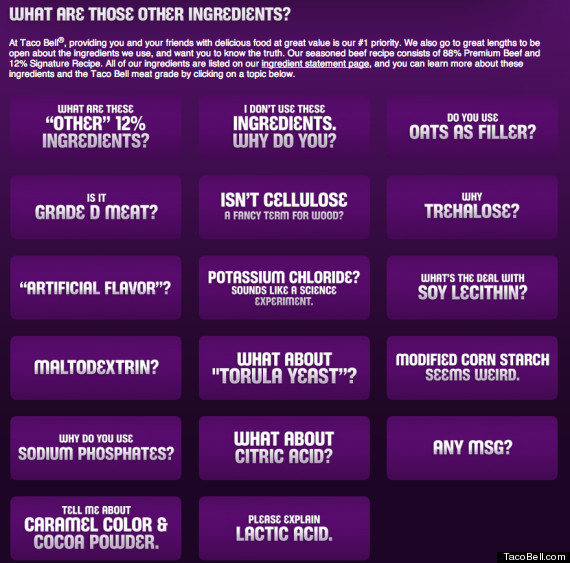 If you're wondering what "trehalose" is, Taco Bell's got an answer for you -- albeit somewhat vague. "It’s a naturally occurring sugar that we use to improve the taste of our seasoned beef." And "natural flavoring?" Taco Bell "add[s] a black pepper flavor to enhance the taste." You read that correctly: "a black pepper flavor" -- not simply "black pepper." It sounded good in theory, but we're not sure how helpful this fact sheet actually is.

Taco Bell fell under scrutiny in 2011 for its "Taco Meat Filling." An Alabama-based law firm called Beasley Allen filed a lawsuit against Taco Bell, charging the chain with false advertising because its beef product didn't contain enough beef. The case was dismissed after Taco Bell adjusted its marketing and disclosed that "88 percent beef and 12 percent seasonings, spices, water and other ingredients." That may have satisfied the law firm and the general public for the time being, but 2014 is a different landscape. From calling for GMO labeling to ending mislabeled seafood, consumers are demanding more transparency across the board in the food industry. Knowing what ingredients are in their food is a critical part of that transparency effort.

The jury's still out on Taco Bell's latest effort to clarify what's in its beef. What do you think of Taco Bell's new fact page?