When we at HuffPost Taste fall hard for a food, we want to know everything there is to know about it. Inspired by a love affair with pho, the iconic Vietnamese noodle soup, we learned the proper way to enunciate the controversially pronounced dish (it's pronounced "fuh," for the record). As serious chocolate fans, we've dug deep to find out what cocoa butter really is, and after an afternoon of nostalgic munching on Goldfish, one of our favorite childhood snacks, we discovered they were labeled "soup crackers" and immediately got to the bottom of this surprising designation. (Were Goldfish meant to be "swimming" in soup all along?!)

Thanks to Empellón Al Pastor, a new restaurant catching everyone's attention in New York City, we recently rediscovered the glory of tacos al pastor. You know what happened next. We started reading up on this Mexican pork dish, and we were delighted to discover the surprising origin of tacos al pastor.

Tacos al pastor come from Mexico, right? Yes, but that's not the whole story. The method of cooking "al pastor" actually comes from Lebanon. It's inspired by shawarma! Lebanese immigrants moved to Mexico in the early 1900s and they brought their famous technique of spit-roasted meat, primarily lamb, with them. 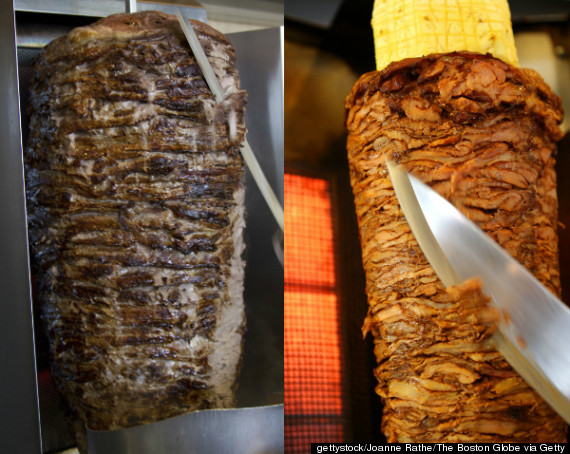 The English translation of al pastor is "in the style of the shepherd." Mexican shepherds adapted the Lebanese style of spit-roasting lamb, using pork instead, and al pastor tacos became a beloved Mexican food the world over.

Tacos al pastor are made from thin strips of pork that have been marinated in spices and chiles and then stacked onto a long spit called a trompo. In many -- but not all -- cases, a pineapple and onion are placed on top of the spit. As the meat cooks, the outside layer gets crispy from exposure to the heat. The taco-maker shaves off the outer layers straight into tortillas, and might top the pork with sliced pineapple, onion, cilantro and salsa. The vertical skewer is a key part of the equation, facilitating fat and juices to drip down onto the stack, "basting it as it crisps," describes Serious Eats. 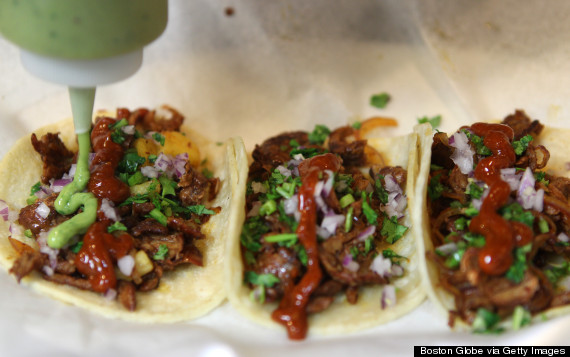 Some people think the pineapple on top of the spit marinates the meat as well, but Empellón Al Pastor chef Alex Stupak, who traveled to Mexico City to eat at 40 al pastor places in three days, disputes this assumption. Stupak told Grub Street that pineapple rests on top of the spit so that it's easily accessible to the taco makers, and the belief that it marinates the meat is pure speculation.

In addition to the contested purpose of the pineapple's place on the trompo, the provenance of placing a pineapple on top of the spit isn't as clear as the shawarma-al pastor connection either. According to Empellón Al Pastor, "where the addition of pineapple came from remains one of history's most delicious mysteries." A delicious mystery, indeed.