Whose voice gets to be heard, and at what cost? It's an ongoing battle with companies and politicians and citizens fighting to control the radio airwaves, broadcast television, cable providers, news outlets, the internet. In the conversations that take place on walls in public, the struggle is just as strong and often as vehement. We just aren't happy when somebody else gets the mic if we can't grab it and rock it too. 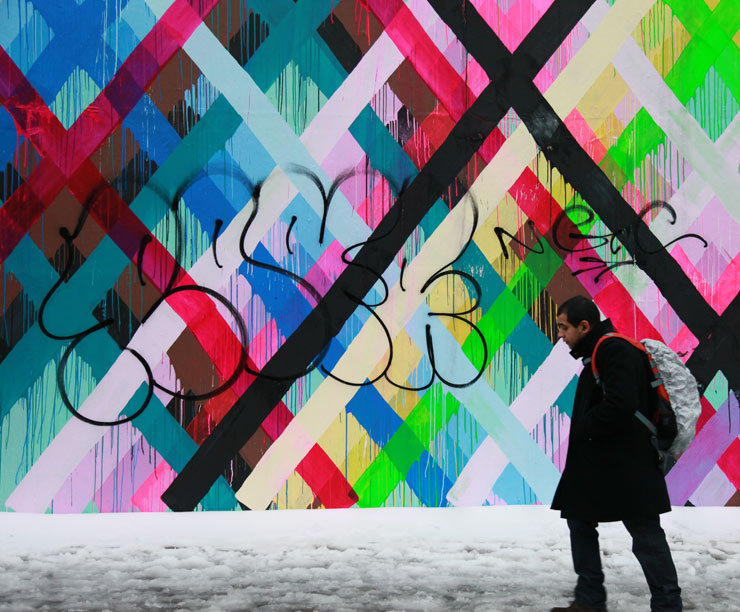 A couple of recent visual disruptions of street art installations have us thinking about the need to be heard at the expense of an artist's work mostly because we learned about them both within a few days of each other. Maybe it was the amount of time and labor that went into the walls, or maybe it's because it can still be shocking even when you know it goes along with the rules of the street.

It's always been part of the game; once you put it on the street you must be prepared to let it go, even though you secretly hope it will ride a while. Without doubt it will be buffed, slashed, ripped, taken, crossed out, tagged over, and deteriorated by the elements. If you're going to play, you might get played and most artists know it and accept it. 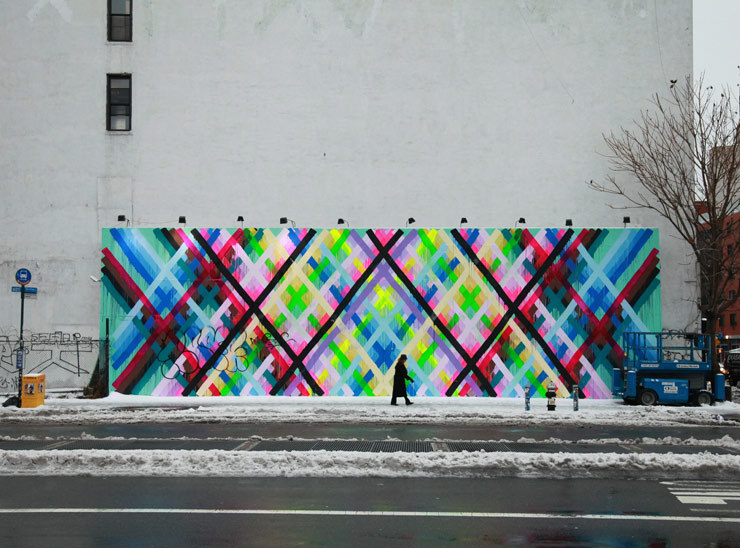 Maya Hayuk. Houston Wall tagged while the artist was in the process of completing her work. (photo © Jaime Rojo)

The Houston Street wall in Manhattan has become a touchstone for many a graffiti and street artist over the last few decades thanks to its early beginnings as a canvas for artists like Keith Haring and Kenny Scharf and because as Soho and the Bowery gentrified most available walls disappeared. Now its an honor to get chosen to do your thing on the wall, even as it often provides a stage for the the still breathing battle between some graffiti writers and the rest of the street art making world.

Before the latest painter finished her piece last week, Maya Hayuk found her eye crossing color jam geometry had some unexpected collaboration. It's not the first time street artists have been hit by graffiti on this wall; Shepard Fairey's installation famously got hit so heavily that holes were literally punched into the wall, and Swoon's community collabo with the Groundswell kids got wrapped with a thick belt of throwies last fall. 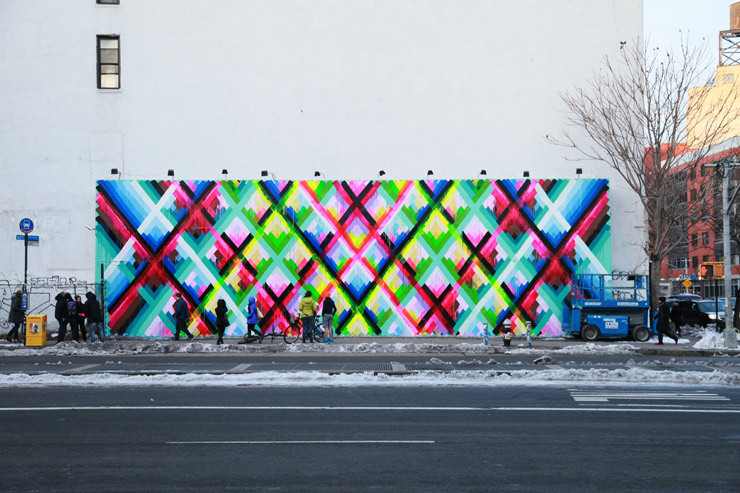 Hayuk tried to shrug it off like a champ and uttered a few terse words -- but ultimately recovered her poppy patterning and finished the wall victorious.

The new tagging on Hayuk's wall brought a fussilade of opinions, wizened philosophical observastions and bromides on social media, including this sampling from Instagram:

After completing the new wall and taking a bow, it was hit again. This time harder. The tags are mostly unreadable to the average public passerby, but it is not those people who these additions are usually speaking to but rather to their peers. So the collaboration is insistent, and in some way perfectly New York. 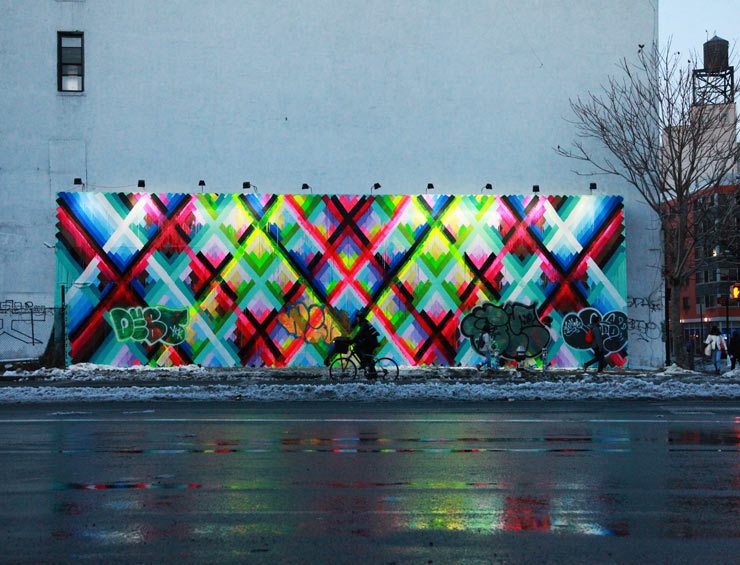 The other sanctioned wall we've been thinking about is in Rochester -- still in New York State, but close to the border of Canada and near Lake Ontario. Faring Purth took a long time to finish this long limbed lady throughout the autumn months, enduring wayward comments, praise and sometimes harsh words from this upstate community who liked yelling things out their car (and school bus) windows as they drove by.

"I received equally supportive and hostile attention from the public while I was painting her. It was a new experience in more ways than I can count," she says of the mural that measures 12 feet high by 125 feet long. 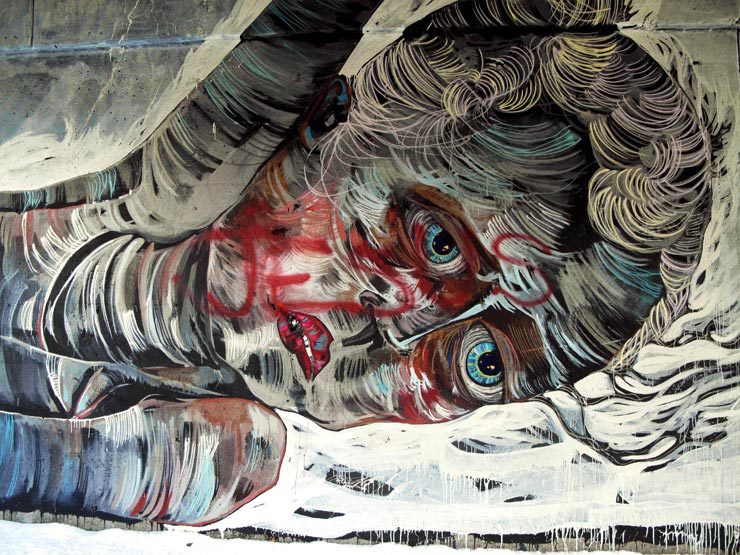 Ultimately the religious contingent who had badgered previous visiting artists in Rochester over perceived thematic threats to family values tagged the face of her "Etty" and put a rudimentary cross in her hand when Faring had gone a way. This was a different sort of diss. It wasn't a turf battle, it was a theological one and more broadly, it was about community norms.

As in the case of Hayuk, the aerosol writer may not even have been addressing the artist or even known who she was. They may have been just striking a victory for the Lord against the evil of the art. Who knows?

Also like Hayuk, Ms. Purth decided to repair her work.

"I fixed her. Or rather, changed her, before hitting the road. She's different now, it taught me a great deal. So finally, stitches and all, here she is." 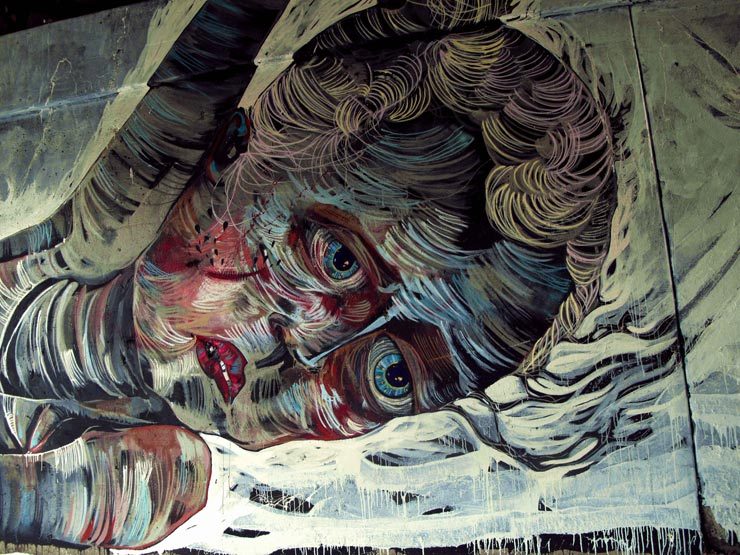 There is no real end or summation to this story and these two recent examples are merely a fraction of the works that get tagged or crossed out every day. It is interesting to note that although the motivations were different for the people who defaced the mural art, the aerosol tool used to express their opinion was the same. Additionally let's all recognize the sublime irony that we are perilously close to using the word "vandalism" in this article.

But in a way, it is still about having a voice and using it, however edifying or injurious. The continuous cycle of constructive and destructive, adorning and scarring, speaking and silencing, is likely to continue as long as artists create in the street. As long as people have a need to be heard, they are going to find a way to get their voice out there. 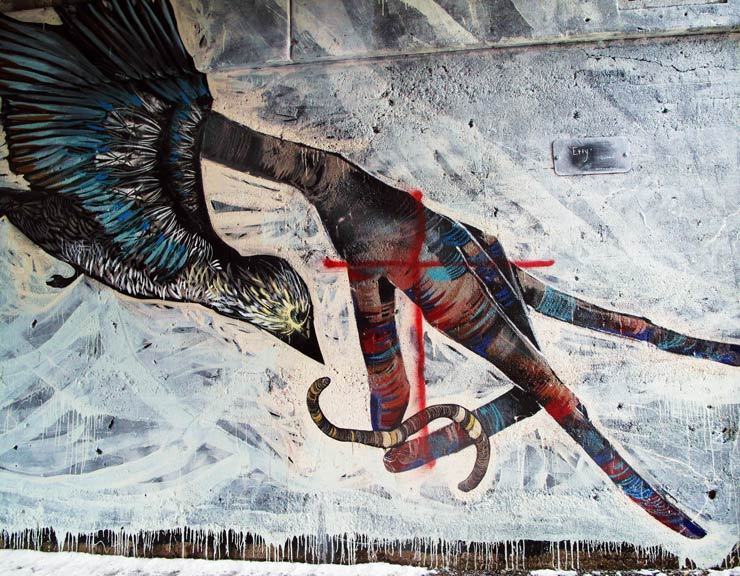 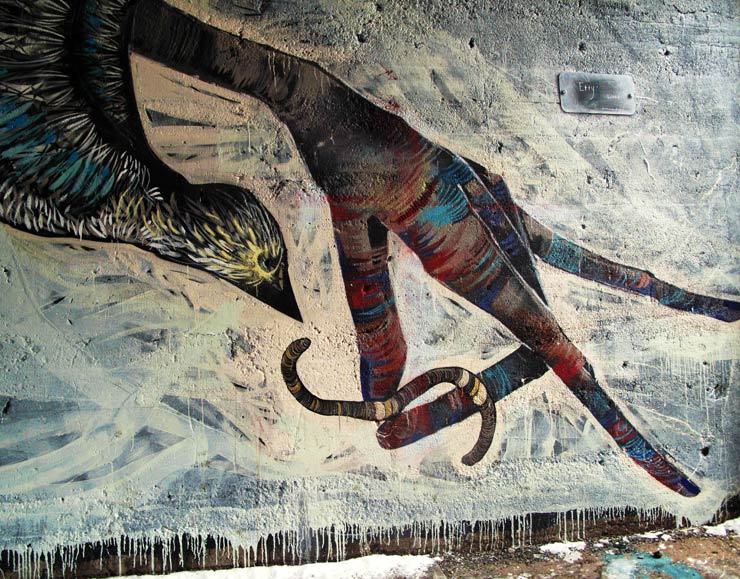 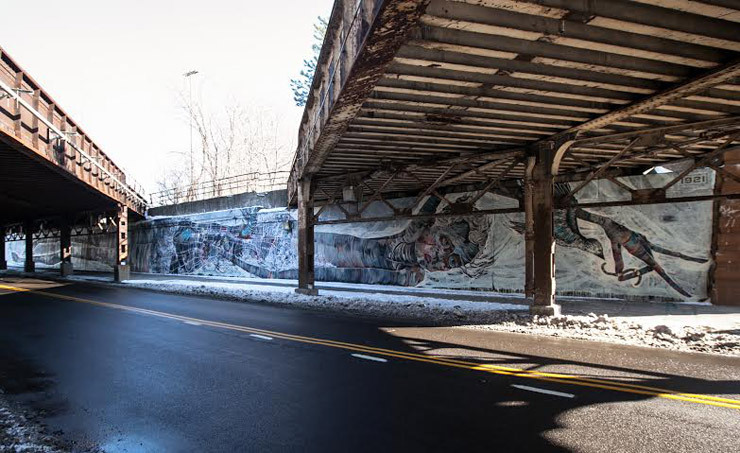