I lived in Egypt during the revolution but sadly, I was out of town during the 18 days. In November 2011, I created @TahrirSupplies, a Twitter account which coordinated the humanitarian needs for protesters in the square. The idea was simply to connect those who wanted to help others, despite their political differences.

I like the term "revolutionary moment." Maybe it'll catch on. I don't feel that it lasted longer than that. Moments differ in length, but moments have an ending, and while I can't remember when this one ended, I no longer feel that it really happened!

The idea was simply to connect those who wanted to help others, despite their political differences.

The movement back then meant change to me-- a chance to look outside our own life and small community and wish for the best for the lives of others. The idea of doing good --and being applauded for it-- drove the actions of many activists and humanitarians, and once that ball started rolling, we felt like we were unstoppable, or that we didn't know how to make it stop!

If you are a doctor willing to help, please head to tahrir, there are several untreated injuries. 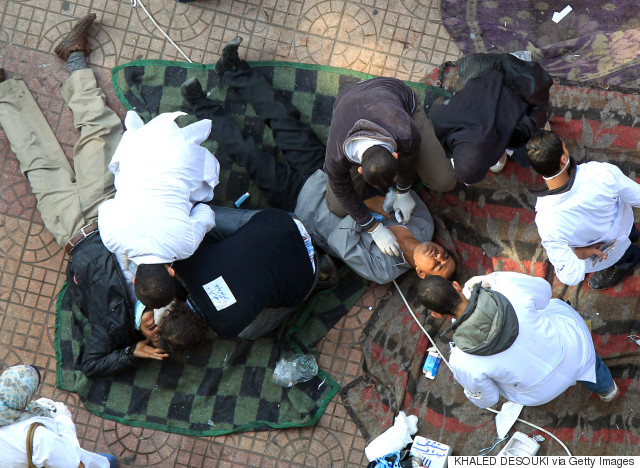 Egyptian doctors treat protesters suffering from the effects of a teargas attack, at field hospital in Tahrir Square in Cairo on November 23, 2011. (Khaled Desouki/AFP/Getty Images)

I had never felt so alive, so in love, so overwhelmed with emotions and so true and dedicated to a cause as I did in those years.

We weren't allowing time for change before returning to the streets with new demands, and as this continued, people started becoming irritated by protesters or revolutionaries.

The revolution advocates started losing credibility as they kept changing their demands and raising the bar week after week, without any follow through on previously opened areas of discussion.

Calling out to everyone in Tahrir & Etihadiya Palace, if you know what medical supplies are needed please inform us.

In any country, there is a very large portion of the population that resists change and doesn't believe they have anything to benefit from it. The instability of the revolutionary movement allowed those resistant to change to reclaim their place in the driver's seat-- driving the revolution away from course.

Despite everything I've just said: I had never felt so alive, so in love, so overwhelmed with emotions and so true and dedicated to a cause as I did in those years. I believed that we knew what we were doing and I was sure we were going somewhere good.

Here's to the days where everyone you knew was out there doing something good, with good intentions, hoping for the best.